Home
Stocks
The Tell: ‘A reflationary boom’ won’t be enough to send depressed bond yields higher, says JPMorgan
Prev Article Next Article
This post was originally published on this site

With government bonds on the backfoot amid signs of a resilient U.S. labor market and positive trade developments last week, investors might think an end to this year’s haven rally could be in sight.

But analysts at JPMorgan say unless central banks make an abrupt turn to tighter monetary policy from the rate cuts and quantitative easing policies they embarked on this year, even a recovery in economic growth is unlikely to sink prices and buoy long-term yields across major government bond markets. Yields and bond prices move in opposite directions.

“Better growth alone is unlikely to resolve the investor headache of too many low/negative-yielding fixed-income assets. Material … rises in yields require stronger growth, central bank tightening and the unwind of QE. Only the first seems plausible next year,” wrote John Normand, head of cross-asset fundamental strategy at JP Morgan, in a Friday note.

Rates for longer-term debt tend to rise in an environment of stronger inflationary and growth pressures, as it can erode the value of a bond’s fixed-interest payments.

The 10-year Treasury note yield TMUBMUSD10Y, +4.05% was up 6.3 basis points to 1.791% on Monday, nearly 30 basis points above its low in early October, following reports that a so-called phase one U.S.-China trade deal may be signed this month. Bond prices move in the opposite direction of yields.

A stronger-than-expected October jobs report on Friday, despite the General Motors Auto strike, also allayed fears the labor market would finally succumb to the lingering global growth and trade headwinds.

Read: The economy is avoiding the worst potholes, but the U.S. isn’t ready to hit the accelerator

But a sharper selloff in long-term government bonds across developed markets like Australia, the U.S. and the United Kingdom may be harder to envision, Norman cautioned.

“The only way to deliver a material rise on bond yields of 50 basis points or more would be if the expectations of DM central banks tightening began to enter the money market,” he said.

That seems unlikely with the European Central Bank resuming its bond purchases this week. In addition, Federal Reserve Chairman Jerome Powell said the central bank would not hike rates unless they saw a “really significant move up in inflation that’s persistent.”

It’s why Normand says even if inflation starts to creep back toward central bank inflation goals, monetary policy makers may want price levels to overshoot the targets to make inflation expectations credible. That means inflation will have to overcome a much higher bar for central banks to start raising rates or shrinking the size of their balance sheets. 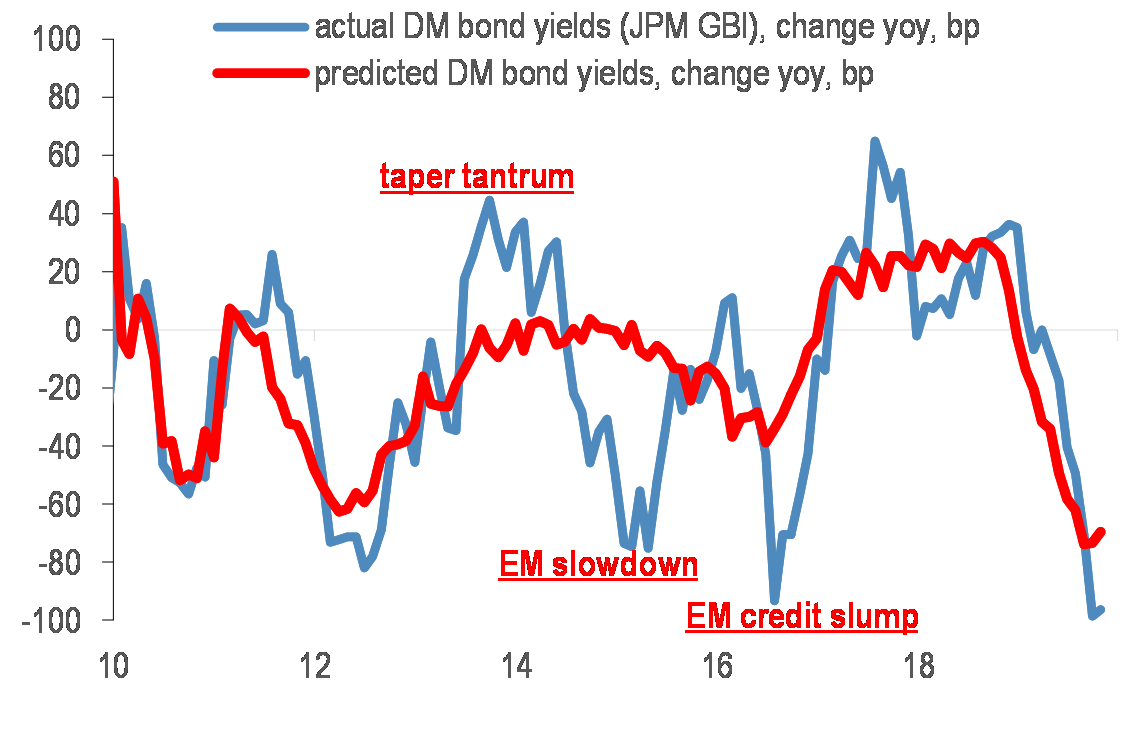 The upbeat trade news and economic sentiment helped buoy stocks at the start of the week. The S&P 500 SPX, +0.43%, Nasdaq Composite COMP, +0.52% and the Dow Jones Industrial Average DJIA, +0.39% all traded in record territory Monday.