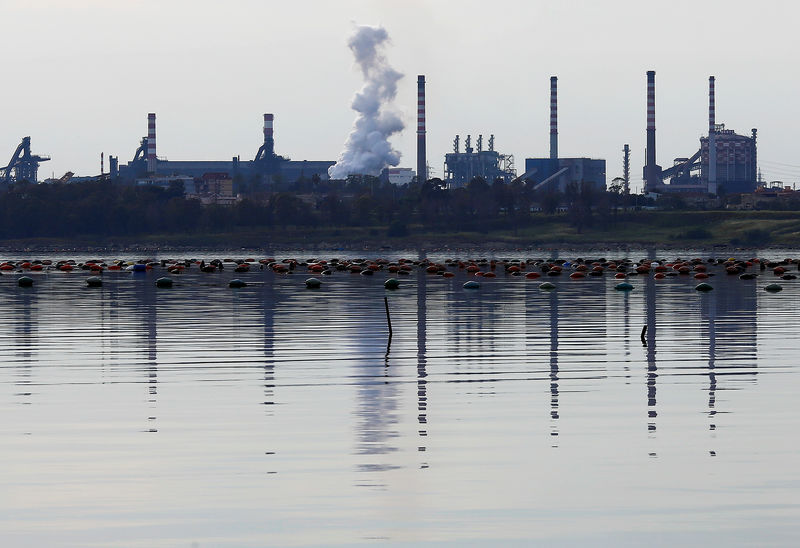 ROME (Reuters) – ArcelorMittal (AS:) said this week it was withdrawing from a deal to buy Italy’s struggling steel firm Ilva after the government scrapped previous guarantees of legal immunity during an environmental clean-up at its plant.

The decision puts at risk thousands of jobs in Italy’s underdeveloped south, threatens supply for Europe’s second-largest steel consumer, and has led to ructions within the ruling coalition.

Here is an explanation of what has gone wrong and why the issue is so important for Italy.

Ilva was founded in 1905. Its biggest plant, and the largest in Europe, took root in the southern city of Taranto in the 1960s. At its peak, the site produced more than 10 million tonnes of steel a year, but following scandals over its appalling environmental record it was placed under state-supervised administration in 2015.

After months of negotiations, steel giant ArcelorMittal (AM) took control of Ilva in 2018. The firm currently has some 10,700 employees, with 8,200 in Taranto and most of the others in two finishing facilities in northern Italy.

Under the deal, AM agreed to pay 1.8 billion euros ($2 billion) for Ilva. It also pledged to spend 1.2 billion euros between 2018-23 on an environmental clean up and 1.3 billion to boost production at Taranto to 8 million tonnes per year from 6 million.

WHAT HAS GONE WRONG?

AM’s main complaint is that the government has removed a pre-existing legal shield that granted it immunity from prosecution over environmental risks while it carried out the clean-up at Taranto.

The shield was introduced in 2015 when the state took charge and gave legal immunity to the then managers as well as to any future buyers while they implemented “the best preventative rules on environmental matters.”

Locals afflicted by pollution said this left them without legal redress and was therefore unlawful. A local judge backed their complaint and the ruling 5-Star Movement, which had promised to shutter Ilva before entering government in 2018, introduced a clause in a decree in June to remove the safeguard.

ArcelorMittal said if the decree was approved, it would pull out of the purchase and initially the government promised to backtrack. But, under pressure from 5-Star lawmakers, the promise failed to materialize and the shield expired on Nov. 3.

WHY DO THEY WANT A LEGAL SHIELD?

Experts say environmental norms were ignored at the site for decades, leaving Taranto exposed to highly toxic pollutants. One report drawn up by a group of medical experts found that between 2005 and 2012, more than 3,000 deaths were directly linked to exposure to pollutants. Locals say there have been hundreds more deaths since then. ArcelorMittal says it cannot run the risk of law suits tied to the pollution before it has had a chance to clear up the mess and make the site safe.

ARE THERE ANY OTHER PROBLEMS?

According to ArcelorMittal, yes. It says an order from a magistrate in July to idle one of three operational furnaces at Taranto following a fatal accident there in 2015 meant it could no longer implement its industrial plan. A court order in September annulled the July demand and gave AM 90 days to make the furnace comply with safety regulations. AM has said it needs more time to complete the desired overhaul.

DOES THE GOVERNMENT ACKNOWLEDGE AM’S COMPLAINTS?

No. Prime Minister Giuseppe Conte says immunity was not part of the purchase accord so cannot be used as a reason to rescind the deal. 5-Star says AM is seeking an excuse to flee Italy at a time of weakness in global steel markets. Ilva made an EBITDA loss of some $350 million in the first half of 2019.

AM has cut its output in Europe blaming weak demand and high imports. Critics say it would therefore be in the company’s interests if Taranto was shuttered. AM denies this, saying it aimed to make Taranto the lowest cost site in Europe.

If AM does pull out, the case will end in court. In the meantime, the government would have to take the site back and presumably seek a new buyer or nationalize it. The coalition would also face a huge political backlash.