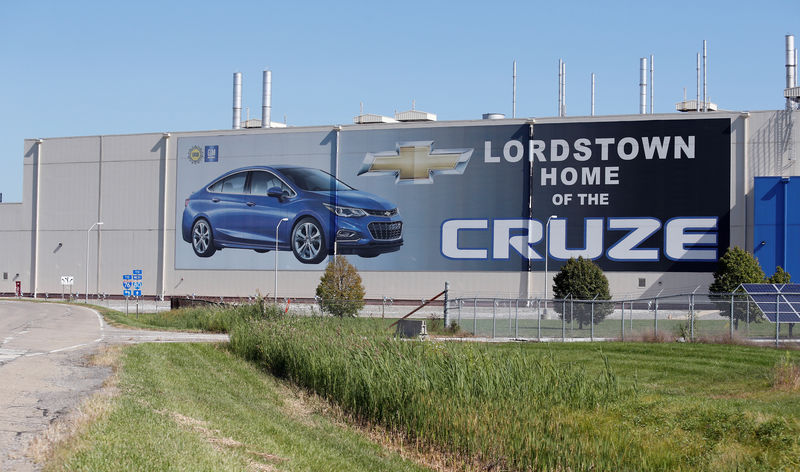 © Reuters. Mural is seen on side of GM Lordstown Assembly plant during UAW national strike in Lordstown, Ohio

(Reuters) – General Motors Co (NYSE:) confirmed on Thursday it has sold its shuttered Lordstown Assembly plant in Ohio to a start-up that has an ambitious plan to begin building electric pickup trucks by the end of 2020.

Lordstown Motors Corp, which is 10% owned by Workhorse Group Inc, has retained an Ohio investment bank and is working to raise additional capital, Lordstown Chief Executive Steve Burns said in an interview. Workhorse shares jumped 22% on the news.

The fate of the northeastern Ohio plant has become a lighting rod in the 2020 presidential election after GM announced in November 2018 its planned closure, drawing condemnation from U.S. President Donald Trump and many U.S. lawmakers. The fate of the plant, which ended operations in March, remained uncertain until the Detroit automaker reached a new contract with the United Auto Workers union last month.

The company has been working on the engineering of the new truck called Endurance and hired Rich Schmidt, a former director of manufacturing at Tesla (NASDAQ:) Inc, as chief production officer.

GM said Thursday it believes “LMC’s plan to launch the Endurance electric pickup has the potential to create a significant number of jobs and help the Lordstown area grow into a manufacturing hub for electrification.”

GM is not investing in the venture. The purchase price was not disclosed, but sources said it was similar to EV start-up Rivian Automotive LLC’s 2017 acquisition of a former Mitsubishi plant in Normal, Illinois, for $16 million.

Burns hopes to have pre-production prototypes coming of the assembly line by April and start production by November 2020 with 400 hourly workers to start.

Burns declined to say how much money the company has raised but said they have raised enough to hire the management team and engineers and acquire the factory. He said “the serious” effort to raise additional financing began on Thursday, and he is looking for new strategic investors.

The fate of the Lordstown plant has been a major focus for Trump, who in June 2017 advised workers in nearby Youngstown, Ohio, that factory jobs were not leaving. “Don’t move, don’t sell your house,” he said.