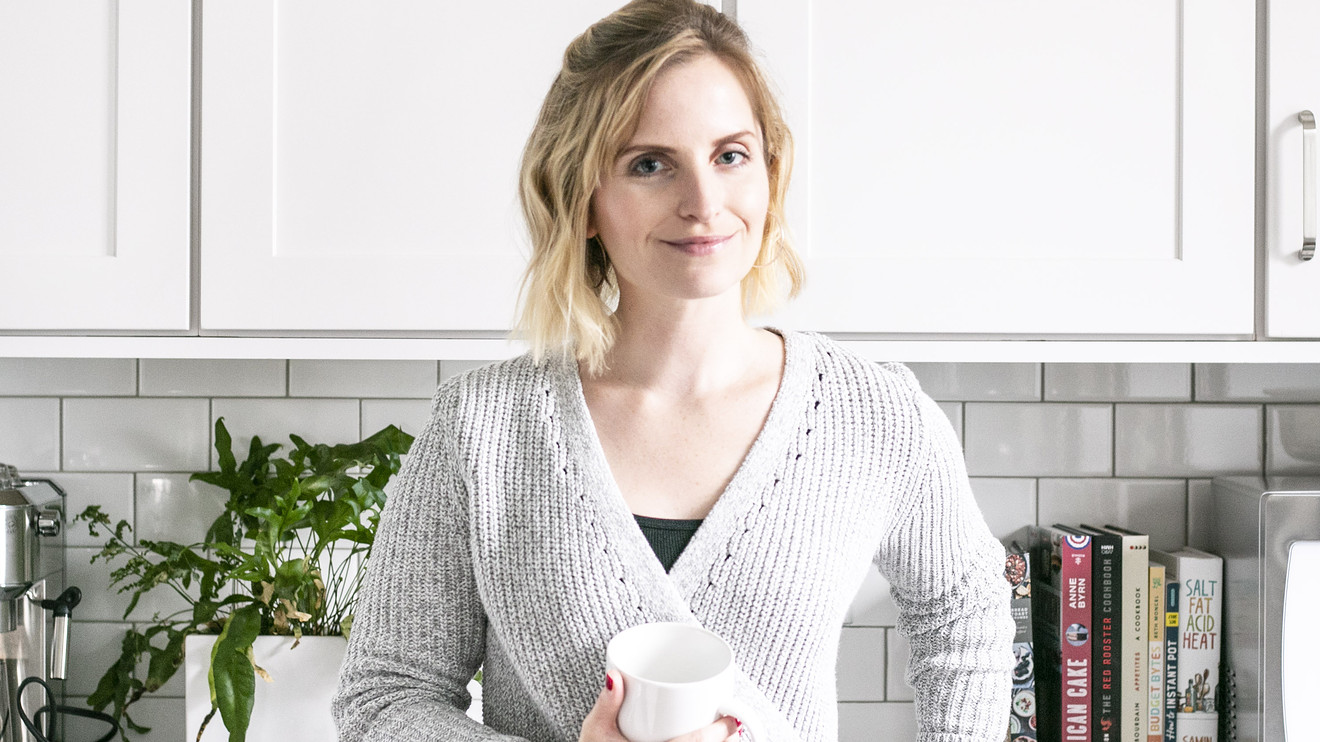 Beth Moncel learned how to whip up tasty meals on a lean budget — then taught millions of savings-hungry home cooks to do the same.

During the recession in 2009, Moncel was struggling to stay afloat while making pizzas in the prepared-foods department at Whole Foods. She had graduated two years earlier from Louisiana State University in Baton Rouge with five-figure student loans that had recently gone into repayment.

As Moncel tried to make ends meet while spending money on little other than bills, she decided the only category in her budget with any wiggle room was food, she told MarketWatch. And with a nutritional science degree under her belt, she knew that eating less or subsisting solely on canned beans weren’t healthy options. So Moncel, a lifelong home cook from a family of seven who says cooking marries her passions for science and art, worked to whittle down her food budget.

She paid close attention to how Whole Foods priced its hot foods and salad bar.

She took note of how her Amazon-owned AMZN, -0.13%  employer tracked every bit of its food waste and repurposed leftovers: Ingredients that didn’t sell well might wind up as a creative pizza topping, she said, or as part of a specialty sandwich.

She also paid close attention to how Whole Foods priced its hot foods and salad bar at a flat $8- or $9-per-pound rate, she said, noting that the total cost per pound accounted for foods that were both more and less expensive by weight.

“Working in commercial food service taught me to be really mindful of waste, and how to strategically use expensive and inexpensive ingredients in a way that keeps overall meal costs low,” said Moncel, who is now 38 and lives in Nashville, Tenn., with her boyfriend and dog. “If you keep your ratios correct, you’ll still keep your total cost low.”

A Whole Foods spokeswoman confirmed to MarketWatch that caring for the environment and cutting food waste has long been a part of the grocery chain’s mission. “These efforts save money and have major social and environmental benefits for communities across the country,” said Kathy Loftus, Whole Foods’ vice president of sustainability.

Moncel realized she could design recipes with a similar ratio in mind, relying on inexpensive staples like sweet potatoes, beans and lentils to provide the bulk of a meal while incorporating small amounts of cheeses, nuts and meats to keep her palate satisfied.

She learned how to reduce waste by freezing leftover ingredients or repurposing them creatively, she said, and used grocery-store receipts and servings-per-package information to price out her meals by ingredient. She started seeing where her money was going when she cooked.

The average American spent $4,363 on food at home in 2017, accounting for about 7% of his or her total spending, according to data from the Bureau of Labor Statistics — a 7.8% increase over the previous year. Meanwhile, the United States throws out up to 40% of its food every year, amounting to $165 billion in food waste, according to the Natural Resources Defense Council.

After Moncel’s Facebook FB, +0.22%  posts about her budget meals generated demand for recipes, she launched the Budget Bytes blog as a low-cost personal project in the summer of 2009 before heading back to school for a clinical laboratory science degree. To her surprise, her blog began to earn exposure from high-profile sites like Lifehacker.

“I didn’t really expect anyone to see it,” she said. “But because it was 2009 [during a] recession, I think I was just in the right place at the right time.”

Ten years later, Moncel’s blog draws around 2.5 million unique users and an average of six million page views per month, she said, with traffic varying by season. She carved out time for the blog by going part-time at her laboratory job in the fall of 2014, eventually resigning in the spring of 2015 to work on it full-time. The blog has spawned a book and mobile app by the same name, and while most of her revenue today comes from the blog, Moncel said she has plans to diversify with meal-plan ebooks.

As for Moncel’s student loans, which she estimates totaled “somewhere in the upper $80,000s” after her two degrees, she followed the so-called snowball method “so I could focus on only one loan at a time and could avoid looking at the total.”

“After sinking every penny I could into the loans for almost 10 years, they are all paid off now,” she said. “Luckily, I’m one of those people that really gets off on watching the numbers go down, so making the biggest payment I could every month actually made me happy instead of depressed.”

Many of the roughly 1,100 recipes Moncel has posted over the past decade — each of which includes the cost per recipe and cost per serving — showcase her trusty ratio.

She points to her chorizo sweet-potato skillet recipe ($7.09 per recipe and $1.81 per serving), for example, which enlists relatively cheap rice, black beans and sweet potatoes to help offset the cost of a half pound of chorizo. Her Tuscan white-bean pasta ($6.45 per recipe and $1.61 per serving) leans largely on pasta and canned cannellini beans while indulging in “good” shredded Parmesan and grape tomatoes. And her chicken-noodle soup ($10.44 per recipe) stretches two chicken breasts into eight $1.31 servings by bulking up on inexpensive egg noodles and vegetables like carrot, celery and onion, she said.

Moncel calculates recipe costs by factoring in “whole” ingredients she used in their entirety along with “partial” items of which she used a fraction; she estimates the cost of pantry ingredients like olive oil using their total cost, serving size and servings per container. Most spices and herbs get ballparked at 5 cents a teaspoon — or at 10 cents for pricier fare — to avoid getting too far into the weeds.

Her number-crunching doesn’t account for variation across brands, stores or regions, she said, as daily price fluctuations would make that “literally impossible.” “It’s not so much about the exact price,” she said. “It’s to show you the relationship between the cost of the different ingredients and how they affect the overall cost of the recipe.”

Here’s how to get thriftier about cooking, food shopping and reducing waste, according to Moncel:

Always start by “shopping your pantry.” Before you rush out to fulfill your grocery list, cruise through your pantry and freezer to make sure the ingredients you need aren’t hiding in plain sight. “Half the time, my grocery list gets cut in half,” she said. “Making sure I always use what I have on hand first is really important.” Follow the “first in, first out” credo used by commercial kitchens, using up the oldest ingredients in the pantry before you reach for more recent additions, she added.

Halve your meat and eat it, too. While a lot of American cooking calls for a whole pound of ground beef or a whole chicken breast, Moncel said, it can be cheaper to reduce a recipe’s meat component by half and sub in plant protein. “I keep my meat more of a side-accent ingredient in recipes, rather than it being a main focus,” she said. (Bonus: Researchers have linked diets relatively higher in plant-based foods and lower in animal-based foods with lower mortality and lower cardiovascular disease risk.)

Skip “super-convenience” foods that you could probably make yourself for cheaper. That goes for premade peanut-butter-and-jelly sandwiches or frozen veggies that come in a premade herb-seasoned sauce, Moncel said. “It takes like 30 seconds to add some herbs and butter to vegetables,” she said.

Beef up on basic veggies. Moncel says many people consider eating healthy to be an expensive proposition because they’re preoccupied with “trendy superfoods” of the moment. But reliable standbys like cabbage, potatoes, onions, bell peppers, carrots and even kale are relatively inexpensive, she said. “I try to bulk up on those ingredients and try to make them the star of the show,” she said.

Incorporate fats (sparingly). Add small amounts of fat — whether it’s bacon, avocado, nuts or cheese — to help keep your meal satisfying, Moncel said. While some of those ingredients may not come cheap, you can stretch them by using small bits at a time.

Warm up to your freezer. Moncel likes to freeze the obvious items like meats, but also leftover ingredients like tomato paste, cheese, fresh ginger, lemons and limes, and bread, all of which can be thawed for use in future meals. She gravitates to frozen broccoli and cauliflower, cruciferous veggies that are a pain to chop and can be pricier when fresh. She also tosses in single-serving portions of freezer-friendly foods like chili, soups, stews and rice dishes, which can be eaten alone or used to supplement fresh ingredients later.

Broaden your grocery-shopping horizons. “A lot of people don’t realize how much prices can differ with different types of stores,” Moncel said. Farmers’ markets often have cheaper produce than your local supermarket, she said, as do international grocery stores. You can also buy many cuisine-specific items at the latter that would be sold as pricier “specialty” foods at a typical grocery store, she added.

Portion out your food into single servings right after you cook it. This prevents Moncel from overserving herself later on, she said. “If you just eat recklessly, you’re blowing through your budget recklessly,” she said. “I think that because so many of us eat mindlessly, we end up eating more than we actually need.” Experiment with portion size to find how much you need to feel satisfied, she suggested.