Canada Goose stock is off 50% over the past 12 months. But if you think that’s a big discount for the $1,000 coat company, you ain’t seen nothin’ yet.

They won’t keep you as warm as the famous coats, but they will leave you with a lot more money in your pocket. The prices are as low as $14 for two patches.

The counterfeit patches are still for sale, about 10 months after MarketWatch first wrote about them. Canada Goose and eBay did not immediately return request for comment.

“Like many world-leading brands, our success has led to our products being copied by counterfeiters,” the company told MarketWatch earlier this year. “We take the protection of our brand and our trademarks seriously, and we will continue to take the necessary steps to protect consumers from the dangers of counterfeit goods.”

But as soon as you take down one counterfeit, another one springs up.

eBay declined to address the patches directly but said, “Consumers can shop eBay’s 1-plus billion items with confidence, knowing we have key partnerships and processes in place with rights owners, law enforcement and government officials to ensure a safe shopping experience.”

One tip for anyone planning to use these faux patches to elevate their humble jacket’s status: Real Canada Goose coats have the logo on the left arm.

Most businesses argue that counterfeit goods are a menace to legitimate operations that invest in research and development and produce quality products. American companies, and other Western businesses, have fought for years to shut down the booming Chinese industry in counterfeits.

It is open to dispute whether those buying a $5 patch on eBay were under the impression they are purchasing a genuine product from Canada Goose, whose winter coats start at $775 and typically cost more than $1,000.

As our photo shows, the fake patches weren’t identical to the company’s logo, but they were pretty close…especially for about 0.5% of the price. 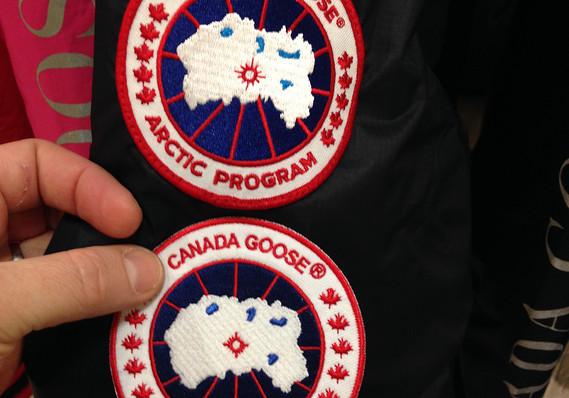 A side-by-side comparison of a real Canada Goose patch (top) and a fake one purchased on eBay.

One tip for anyone planning to use these faux patches to elevate their humble jacket’s status: Real Canada Goose coats have the logo on the left arm.

Canada Goose GOOS, +2.59%, which today has a market value of more than $7 billion, built its reputation making heavy-duty down-filled “Expedition Parkas” for scientists working in Antarctica.

Now it calls itself “one of the world’s leading makers of luxury apparel,” and during the winter months its distinctive logo can be seen on coats in the richest and most fashionable neighborhoods of temperate world cities.

It has flagship stores in New York, London, Tokyo, and even steamy Hong Kong. The company said that last year it made $580 in gross profits on every $1,000 in sales. Stock in the Canadian-based company has quadrupled in value since joining the U.S. stock market last year.