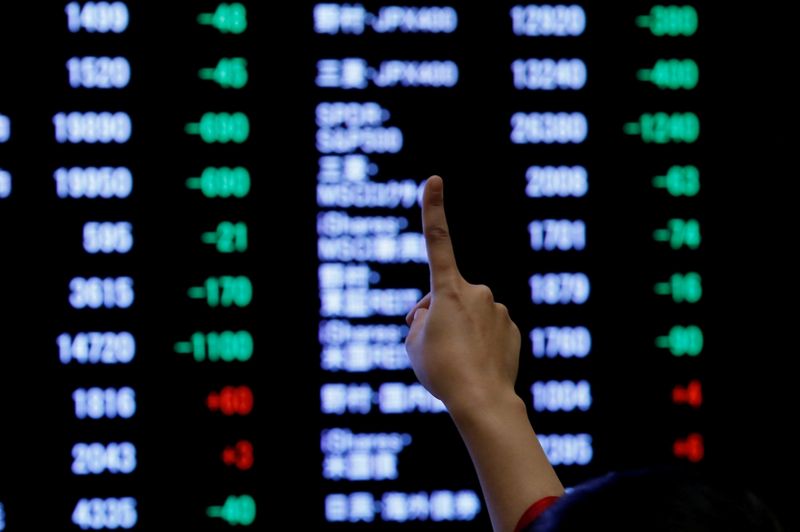 SINGAPORE (Reuters) – Asian stocks extended earlier gains on Wednesday, although advances were patchy ahead of key central bank meetings while the pound wobbled as opinion polls pointed to a tight UK election later this week.

Investors were also cautious ahead of Washington’s deadline for new tariffs on Chinese goods this Sunday, although stronger-than-expected Chinese loans data provided some support for sentiment.

Japan’s was unchanged. Futures pointed to flat open in Europe and on Wall Street.

Faced with conflicting reports, investors have begun to suspect that even if tariffs due to take effect on Sunday are delayed, it could take until 2020 before Washington and Beijing can agree a preliminary deal to wind back their trade war.

“Every day we get a little bit of a nudge one way or the other,” said Rob Carnell, Asia-Pacific chief economist at ING in Singapore. “You just don’t know who to believe, whether these comments have any basis in reality or whether they’re a negotiating tactic.”

There was some good news form investors on China’s economy with new bank loans rebounding more than expected in November, data showed on Tuesday, a sign that recent cuts to key lending rates were finding some traction.

Without harder news on the trade front, investors’ focus turned to the U.S. Federal Reserve’s policy meeting and its outlook for the economy due at 2000 GMT, as well as Britain’s election and a European Central Bank (ECB) meeting.

The Fed is widely expected to hold rates steady, with investors watching for whether the central bank changes its view of the economy and its 2% growth forecast for next year.

U.S. inflation data due at 1330 GMT, expected to hold steady, may further reduce chances for rate cuts next year should it surprise on the upside.

The biggest mover among major currencies was the pound, which shed 0.3% to hit $1.3128 after a closely watched YouGov poll showed the ruling Conservatives tracking toward a much slimmer majority than forecast a fortnight ago.

It recouped some losses during the day, but remained under the eight-month high struck overnight, when investors were more confident of a Conservative victory and expected it could end uncertainty over Britain’s exit from the European Union.

YouGov’s research director, however, said the results showed a hung parliament was possible.

“Granted, this still portrays a Tory (Conservative) majority but given what is already priced … the actual outcome has resulted in some of the heat coming out of a fairly frothy market,” said Chris Weston, head of research at Melbourne brokerage Pepperstone.

A Wall Street Journal report that said U.S. and Chinese officials were preparing for a delay to the Dec. 15 round of tariffs knocked bonds but did not shift stocks since it suggested no resolution to the trade conflict.

White House trade adviser Peter Navarro said on Tuesday that U.S. President Donald Trump would make a decision soon on whether to enforce or suspend the tariffs.

Overnight the and the S&P 500 each fell 0.1%, while the Nasdaq dropped by a little less.

The yield on benchmark , which moves inversely to price, last stood a little higher at 1.8364%.

Elsewhere among currencies, the dollar nursed overnight losses against the euro after German economic sentiment sharply rose after an unexpected rebound in October exports.

The dollar drifted 0.3% lower to $0.6526 as the government trimmed its growth forecasts and announced a long-term fiscal spending program.