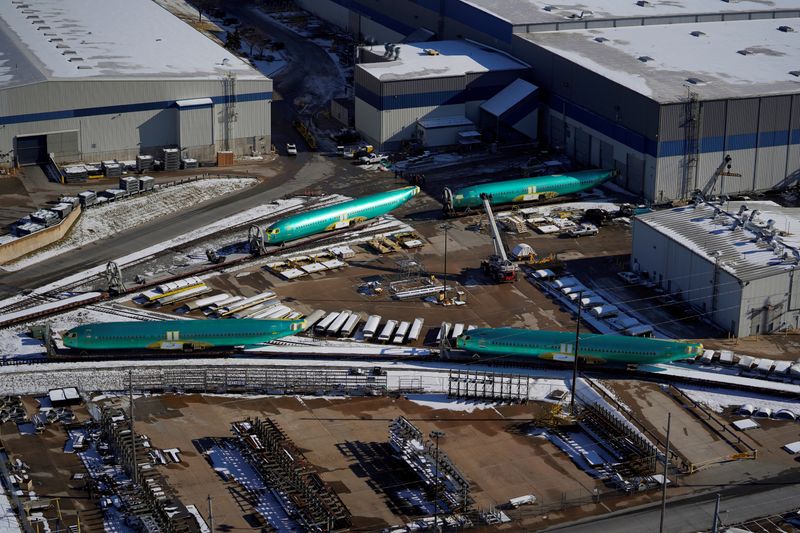 Wichita, Kansas-based Spirit has staffed its factory with enough workers to maintain a pre-crisis build rate of 52 aircraft per month and to enable a smooth step-by-step eventual increase to 57 aircraft, the person said.

Now, furloughs in Kansas are likely if Boeing stops paying Spirit to build and store fuselages at those rates, the person said, adding that scenario was likely as Boeing looks to conserve cash. A second supply chain source agreed.

“No way can they keep going,” he said.

A Boeing spokesman declined to comment on discussions with suppliers. He referred to a Monday statement that Boeing will work to “sustain the gains in production system and supply chain quality and health made over the last many months.”

The fallout depends on how long Boeing’s freeze lasts, and how much if any compensation Boeing pays to prop up some of the roughly 680 suppliers that feed its best-selling program.

Payments may not come quickly.

Planemakers rarely signal any intention to help the supply chain in advance, otherwise hundreds of healthy firms would demand compensation immediately, the supply chain source said. Instead, Boeing will assess impacts and may quietly help some companies bridge the gap until production resumes, he said.

Boeing will be caught in two conflicting pressures: the need to conserve cash, and maintaining its ability to ratchet production upwards once the MAX starts flying again – a goal behind Boeing’s decision not to lay off any employees.

“The potential loss of talent, access to capital and incremental risk on the supply chain all create substantial uncertainty about Boeing’s ability to increase production levels once the pause ends,” Canaccord Genuity analyst Ken Herbert said.

About 80% of Boeing’s closely guarded recurring costs in building the mature 737 – a figure that some sources place as low as $10 million per plane, a fraction of $40 million to $50 million estimated market value – involve payments to outside suppliers for parts.

Boeing said it does not disclose that ratio.

Big, diversified suppliers of systems like avionics and landing gear – like United Technologies Corp (NYSE:) or Honeywell International Inc (NYSE:) – will be relatively insulated because their revenue is spread across other Boeing and Airbus programs. They can also tap lucrative after-sales parts and repair services.

But providers of materials or structures, ranging from Spirit to a cluster of mom-and-pop machine shops in Washington state, where the 737 MAX is made, will be disproportionately exposed because those parts are sold once and rarely replaced.

“We are already under contract for parts,” he said. “We have already bought material, we already have labor into it.”

His factory has 16 weeks to deliver a part to the 737 factory in Renton, south of Seattle, and Boeing in turn has 90 days to pay. “All of our costs are up front. We have a lot invested,” he said.

The shutdown comes as the world’s largest planemaker is urging suppliers to cut prices or give up a greater share of the after-sales market for parts and repairs – the focus of Boeing’s own new services business.

One U.S.-based hardware supplier has watched its Boeing order backlog slide over the past six months, making 2020 sales forecasts difficult.

Engine-makers have a silver lining, however.

“That’s good news for Airbus,” one of the sources said.