A worker welds metal components in Pennsylvania. U.S. manufacturers have struggled to maintain growth after the flare up in trade tensions with China last summer.

The numbers: A slump of among American manufacturers deepened in December as a survey of senior executives showed the weakest performance in more than 10 years.

The Institute for Supply Management said its manufacturing index slid to 47.2% last month from 48.1% in November, marking the fifth straight contraction. It’s softest reading since June 2009 — just as the U.S. was exiting the Great Recession. 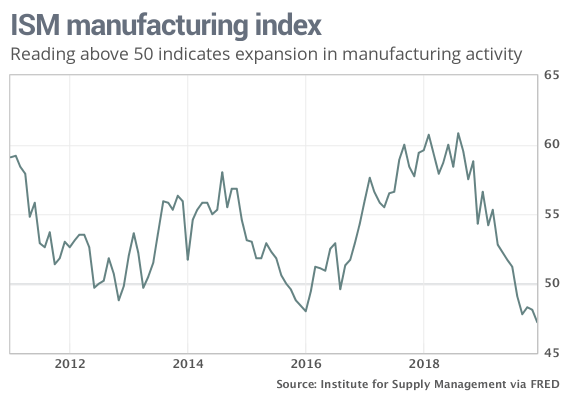 Readings below 50% indicate more companies are contracting instead of expanding.

The deterioration in December stemmed in part from Boeing BA, -0.78%  suspending production of its troubled 737 Max jetliner and the residue of a recent strike at General Motors GM, -2.77%  , but the report showed broad weakness in manufacturing tied to the ongoing trade war with China.

Economists surveyed by MarketWatch had forecast the index to total 48.8%.

What happened: The ISM’s index of production sank 5.9 points to 43.2%, hitting the lowest level in almost 11 years. Boeing and GM played a big role in the decline, but the most other industries reported contraction, too.

Only three of the 18 industries tracked by the ISM said their businesses expanded in December. That’s matches the fewest since 2009.

The index is compiled from a survey of executives who order raw materials and other supplies for their companies. The gauge tends to rise or fall in tandem with the health of the economy.

Big picture: Although manufacturers ended the year on a sour note, they hope the first phase of an agreement between the U.S. and China to resolve a damaging trade dispute leads to a further easing of tensions between the world’s two largest economies.

“Global trade remains the most significant cross-industry issue, but there are signs that several industry sectors will improve as a result of the phase-one trade agreement between the U.S. and China,” said Timothy Fiore, chairman of the survey.

The trade war hurt both countries last year as well as the broader global economy. American manufacturers began to contract at the end of the summer, though scattered signs of a rebound are staring to emerge.

What’s shielded the U.S. from further harm is steady growth in the much larger service sector of the economy. Manufacturing plays a much smaller role in the economy than it did several decades ago.

“The bottom line is that the modest deterioration in December in an already sluggish manufacturing sector is unquestionably a disappointment,” said Jim Baird, chief investment officer at Plante Moran Financial Advisors. “Even so, activity remains well above levels typically associated with a recession.”

What they are saying: “Due to sluggish sales, we have introduced promotions to generate increased sales,” said an executive at a chemicals maker.

“Starting to see suppliers try to pass on costs associated with tariffs,” said an executive at a maker of food products. “Uncertainty on the trade front continues to keep agricultural markets on the defensive.”