Home
Stocks
Last year’s rate cuts may need to be reversed, Fed’s George says
Prev Article Next Article
This post was originally published on this site 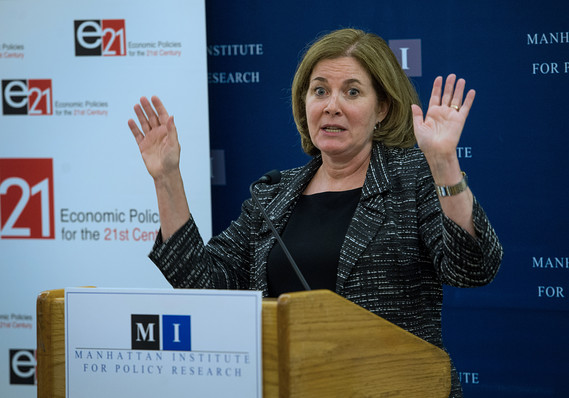 The Federal Reserve might have to take back the three interest-rate cuts engineered last year if trends holding down growth ease, said Kansas City Fed President Esther George on Tuesday.

“We will need to asses whether the 2019 rate cuts prove to be ‘insurance cuts’ that will need to be reversed if headwinds fade,” George said, in a speech to the Central Exchange, a business leadership development group in Kansas City.

The Fed trimmed its benchmark federal funds rates to a range of 1.5% to 1.75% in three quarter-point moves last summer and fall.

In her remarks, George said there may be no need for the Fed to reverse course if research shows the new level of the benchmark rate is closer to an equilibrium rate than has been assumed.

The Kansas City Fed president said it also might be necessary to cut rates further if the economy stumbles.

“It could be the case that downside risks and uncertainties persist in a way that keeps investment spending weak and spills over to the consumer, altering the modal outlook and requiring further policy easing,” George said.

The Fed needs some time to see what develops, George said.

“Keeping rates on hold for now is appropriate in my view as we assess the economy’s response to last year’s rate cuts and monitor incoming data,” she said.

That is a common refrain from many Fed speakers in the beginning of 2020. The Fed will hold its next interest-rate policy meeting at the end of the month and Fed watchers widely expect the central bank to remain on hold.

There has been relatively little talk from Fed officials about taking back “insurance cuts.”

For her part, George said she expects the expansion to continue, supported by solid consumer spending. Manufacturing and business spending were likely to remain weak, she added.

“The combination of these factors should lead to slower growth in real GDP—our broadest indicator of economic activity—to its longer-run trend of 1.75 to 2%, George said.

“”With growth near trend, I would expect the unemployment rate to remain near its current level of 3.5% and inflation to remain benign.”