Home
Stocks
The Margin: Do you use Times New Roman? People might think you’re a Trump supporter, according to this study
Prev Article Next Article
This post was originally published on this site

The typeface used on a campaign sign or in a news publication can be a “font” of information.

A recent Virginia Tech study of just under 1,000 people, which was published in December and shared on the school’s blog last Friday, finds that voters identify some fonts as more conservative, and others as more liberal.

Previous studies have shown that the way different fonts (aka the typefaces and their sizes, shapes, spacing and other qualities) render words and phrases can actually influence what people read into them. For example, subjects in one study described Times New Roman and Arial to be more “direct,” while italic scripts are more “elegant,” and Comic Sans is more “friendly.” And a 2018 report found that travelers were more willing to pay for relaxing trips advertised in an “easy-to-read” font over a “hard-to-read” font. People also eat with their eyes: Customers in a 2019 study thought restaurants with menus printed in handwritten fonts served healthier food.

So Virginia Tech researchers conducted two experiments to determine whether people also assign political leanings to fonts. And they found that people do indeed paint different fonts to be red and blue. Serif fonts like Times New Roman, Georgia and Garamond, which tend to have small, extra strokes embellishing the ends of many letters, were seen as conservative. But sans serif fonts without the flourishes, such as Helvetica, Arial and Avant Garde, were viewed as more liberal. 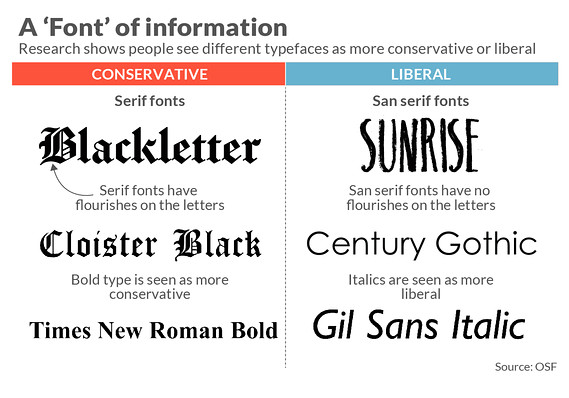 Looking at individual typefaces, the Blackletter family (the more Gothic or Old English-style fonts, like you would see on a newspaper) were considered the most conservative font of all. But Sunrise, a cartoonish, handmade font, was the most liberal.

What’s more, the bold font setting is seen as more conservative than the italic setting, while italics are perceived as more liberal than regular type.

People are bringing their own political views to the table, too, as Republicans consistently rated typefaces as more conservative than Independents or Democrats did in this study, while Democrats considered fonts to be more liberal.

Lead author Katherine Hänschen, an assistant professor in the Department of Communication at Virginia Tech, and an expert in political messaging, said that candidates running for office could use this knowledge to select fonts that better communicate their message to voters — or to win over potential voters in opposing camps. “This study shows that font plays a role in American political communication,” she wrote in an accompanying article. “Through this research, we lay the groundwork for future studies that may identify relationships between fonts and persuasive outcomes in political communication.” A conservative candidate could use a more liberal font to appeal to Democrats, for example, or vice versa.

Some people take typefaces very seriously. When podcaster and author Séan Richardson recently asked his Twitter TWTR, +0.64%  followers which font and font size they prefer to write in, describing it as “the deepest part of yourself,” his post drew more than 4,000 comments, with many favoring Times New Roman, while Arial and Garamond were other popular picks.

It’s all about that adorable lower case f pic.twitter.com/VnPxVh69le

A sample of it’s glory: pic.twitter.com/zmJ6ITTfKm