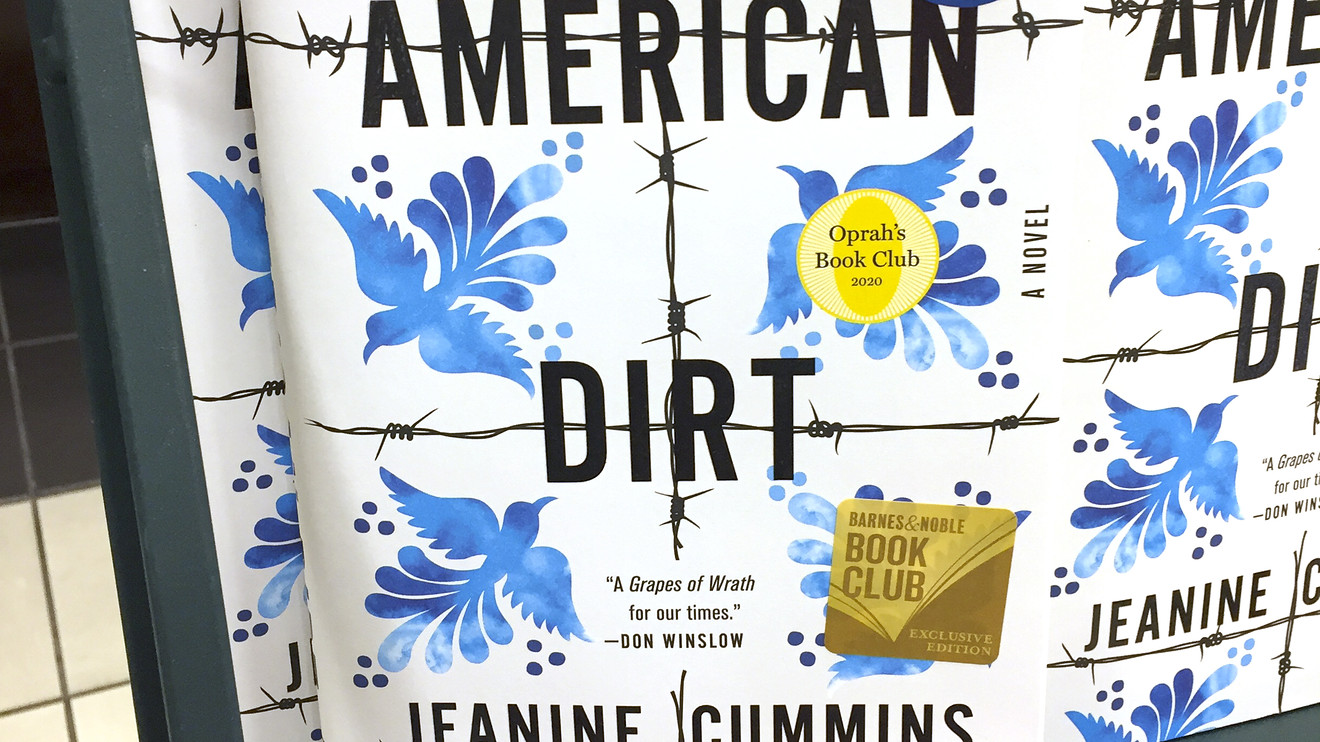 Here’s the dirt on the most controversial book of the year so far — and no, we’re not talking about John Bolton’s upcoming tome that has rattled the impeachment trial.

It’s “American Dirt,” a novel written by Jeanine Cummins that hit shelves last week. The story follows a Mexican mother named Lydia and her son who flee to the U.S. after a drug cartel comes after their family. Publisher Flatiron Books hailed it as “a ‘Grapes of Wrath’ for our times” and “a new American classic.” Cummins was given a seven-figure advance after nine publishers bid on her book, the New York Times reported, and Imperative Entertainment, which produced the Clint Eastwood hit “The Mule,” has already acquired the movie rights.

It quickly became a bestseller on Amazon AMZN, +0.68% , Barnes & Noble BKS, +0.00% , the New York Times and Publisher’s Weekly. Oprah Winfrey tapped it to become one of her coveted book club picks. The Weight Watchers WW, +4.12%   spokeswoman said in a video posted to Twitter TWTR, -1.22%  and Instagram FB, -6.14%  that, “It woke me up, and I feel that everybody who reads this book is actually going to be immersed in the experience of what it means to be a migrant on the run for freedom.”

Our next book club selection is “American Dirt” by @jeaninecummins. It’s a heart-wrenching page-turner, and you won’t be able to put it down.

Yet the author is neither Mexican nor a migrant. She was born in Spain, but Buzzfeed notes that she identified as white in a 2015 New York Times essay, before then identifying as Latinx in a 2019 interview about her new book. And many people have taken issue with the author’s identity, including Latino readers and writers that have accused Cummins of cultural appropriation, perpetuating Latino stereotypes, and possibly copying the works of Latino writers such as Mexican-American poet and novelist Luis Alberto Urrea.

#Americandirt is now an @oprahsbookclub selection. As a Mexican immigrant, who was undocumented, I can say with authority that this book is a harmful, stereotypical, damaging representation of our experiences. Please listen to us when we tell you, this book isn’t it.

Why is Lydia fleeing? Because while her husband, a journalist, was investigating a druglord, Lydia was flirting with that same narco.

What’s more, Flatiron Books displayed barbed-wire centerpieces as decorations at an “American Dirt” book party in May, which critics called “disgusting” and tone-deaf.

Incredible way to kick off #BookExpo2019 last night with the @Flatironbooks party and a bookseller dinner in honor of AMERICAN DIRT. I’m overwhelmed with gratitude. pic.twitter.com/c5gd7vx3bH

Cummins did not immediately respond to a MarketWatch request for comment. She acknowledged questions of representation in the afterward of “American Dirt” however, writing: “I was worried that, as a nonimmigrant and non-Mexican, I had no business writing a book set almost entirely in Mexico, set entirely among immigrants. I wished someone slightly browner than me would write it.”

The 2019 Diversity Baseline Survey conducted by Lee & Low Books, which surveyed nearly 8,000 people, found that the book industry is still mostly white. At the executive level, 78% of people employed in publishing are white, 60% are cisgender women and 82% are straight, while at the editorial level, 85% of the editorial staff across the publishing industry are white. These statistics have remained practically unchanged since 2015.

Where Is the Diversity in Publishing? The 2019 Diversity Baseline Survey Results https://t.co/XSiIlFHdRq pic.twitter.com/ED0gr4lT6V

More than 80 writers wrote an open letter to Winfrey on Wednesday asking her to remove the book from her book club. “Many of us are also fiction writers, and we believe in the right to write outside of our own experiences: writing fiction is essentially impossible to do without imagining people who are not ourselves,” it reads.

But in the case of “American Dirt,” they claim that, “the book is widely and strongly believed to be exploitative, oversimplified, and ill-informed, too often erring on the side of trauma fetishization and sensationalization of migration and of Mexican life and culture. In addition, there are now accusations of heavy use of other Latinx writers’ work.”

The uproar against the novel led Flatiron Books to cancel the author tour on Thursday, with president and publisher Bob Miller citing “specific threats to booksellers and the author” in a press release that led them to believe there “exists real peril to their safety.”

He also acknowledged that Flatiron Books’ surprise to the backlash has exposed the “deep inadequacies” into how the publisher addresses representation, and he also apologized for how the company promoted the book in the first place. “We should never have claimed that it was a novel that defined the migrant experience; we should not have said that Jeanine’s husband was an undocumented immigrant while not specifying that he was from Ireland; we should not have had a centerpiece at our bookseller dinner last May that replicated the book jacket so tastelessly,” he said.

Oprah addressed the controversy in a followup video posted to Instagram earlier this week. “I’ve spent the past few days listening to members of the Latinx community to get a greater understanding of their concerns. And I hear them. I do,” she said.

She will be addressing the controversy in more detail in a March episode of “Oprah’s Book Club” on Apple’s AAPL, -0.14%   streaming service Apple TV+ that will bring together people from all sides to talk about the issues surrounding the book. “I think it’s gonna allow us to open up the conversation in unexpected and, I really hope, meaningful ways,” she said.

Miller also said that Flatiron Books would organize a series of town halls with Cummins and people who have raised objections about the book to “come together and unearth difficult truths to help us move forward as a community.”