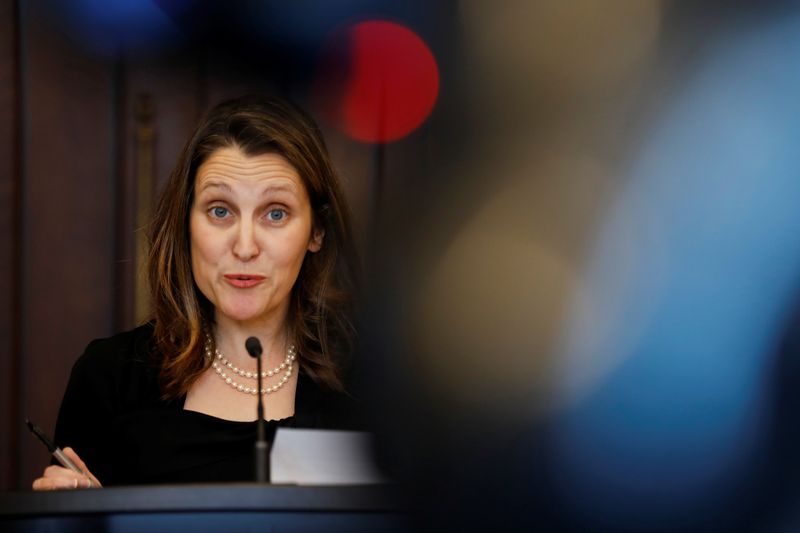 OTTAWA (Reuters) – The Canadian Parliament rushed through ratification of the new U.S.-Mexico-Canada (USMCA) trade pact on Friday before taking a three-week break to help stop the spread of the coronavirus, a top government official said.

Canada was the last of the three signatories to formally adopt the pact, prompting congratulations from the United States and Mexico.

The House of Commons lower chamber, which had weeks of deliberations left, agreed the instant approval on Friday after opposition legislators dropped their objections. The upper Senate chamber backed the pact later in the day, Deputy Prime Minister Chrystia Freeland told reporters.

“(This) was entirely within the power of Canadian legislators to do, something we were able to do to help the Canadian economy at this challenging time, and I would like to thank legislators from all parties,” she said.

The only remaining step is formal approval by the governor-general – the representative of Queen Elizabeth, Canada’s head of state – which is a formality.

The USMCA was designed to replace the North American Free Trade Agreement, which President Donald Trump strongly opposed on the grounds it had cost hundreds of thousands of American jobs.

“Now that the USMCA has been approved by all three countries, an historic new chapter for North American trade has begun,” U.S. Trade Representative Robert Lighthizer said in a statement.

In a letter to the U.S. Congress on Wednesday, Lighthizer sent notice of an entry-into-force date of June 1 for USMCA, according to a spokesman for the Senate Finance Committee, which oversees tax and trade issues.

Groups representing U.S. and foreign automakers — including General Motors Co (N:), Toyota Motor Corp (T:) and Volkswagen AG (DE:) — as well as auto dealers and suppliers — said they were “gravely concerned” by the June 1 date, including the new automotive rules of origin.

“We are in the midst of a global pandemic that is significantly disrupting our supply chains, and the industry is throwing all available resources into managing production through this crisis,” the groups said in the letter, adding that none of the three nations have drafted uniform automotive rules-of-origin regulations.

Automakers, they said, also need time “to solicit the necessary information throughout the supply-chain to certify that our cars and trucks qualify under USMCA.”

Mexican President Andres Manuel Lopez Obrador said the approval was good news for Mexico at a time of economic and financial instability.