Home
Stocks
Autotrader: Comparing the 2020 Toyota RAV4 and Honda CR-V: Which is better?
Prev Article Next Article
This post was originally published on this site

As crossovers have continued their dominance over the past decade, the Toyota RAV4 and the Honda CR-V find themselves at the top of the pile. Offering exceptional reliability, efficient powertrains, great standard safety tech and just about all of the features buyers look for these days, the RAV4 and CR-V are two of the most compelling vehicles on the market.

The RAV4 was fully redesigned for the 2019 model year and carries over pretty much unchanged for 2020 — though, a new TRD Off-Road trim joins the lineup, adding more functionality to the Adventure trim’s rugged aesthetic with all-terrain tires and specially tuned off-road shock absorbers. All 2020 RAV4s are compatible with Android Auto, too. 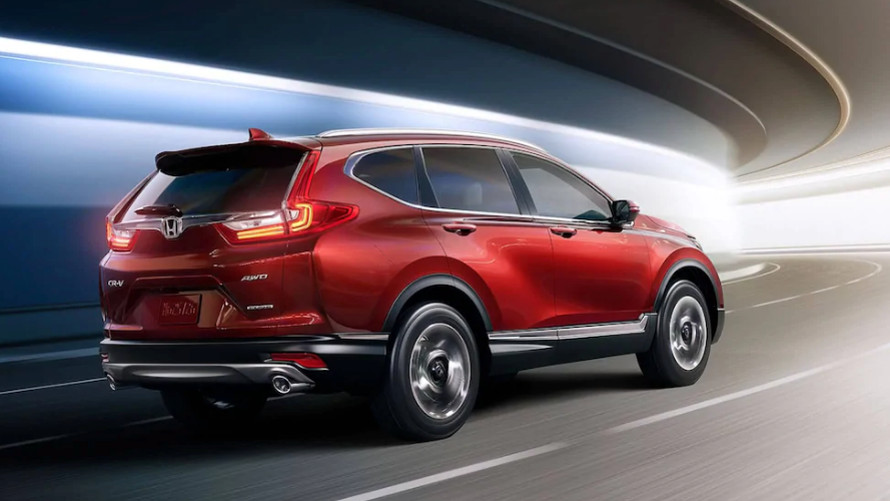 The CR-V was last redesigned for 2017 and receives a face-lift for the 2020 model year. Changes include dropping the 2.4-liter 4-cylinder on entry-level LX models in favor of the 1.5-liter turbo used elsewhere throughout the lineup, standard Honda Sensing across all trim levels, revised front and rear styling with new headlights and new wheels and a redesigned center console with relocated storage areas, as well as the addition of a heated steering wheel and wireless smartphone charging on the top-spec Touring model. Additionally, a hybrid model joins the lineup, which offers similar efficiency as the RAV4 Hybrid, although the RAV4 Hybrid still comes out ahead by a few miles per gallon.

The RAV4 is the more expressive of these two vehicles. With its recent redesign, the RAV4 gained more aggressive styling, inspired in large part by Toyota’s TM, +4.25%   line of rugged trucks and truck-based SUVs, such as the 4Runner. Front-end styling varies by trim level. Mainstream trims get a more sedate front end, while Adventure and TRD Off-Road models get a blunter, more plastic-heavy nose and more cladding overall throughout the sides and rear, again, inspired by Toyota’s more rugged offerings. Hybrid models get a chrome grille, while the sporty XSE Hybrid gets gloss black accents. A black or light gray contrast-color roof is also available on the RAV4’s more unique trims. 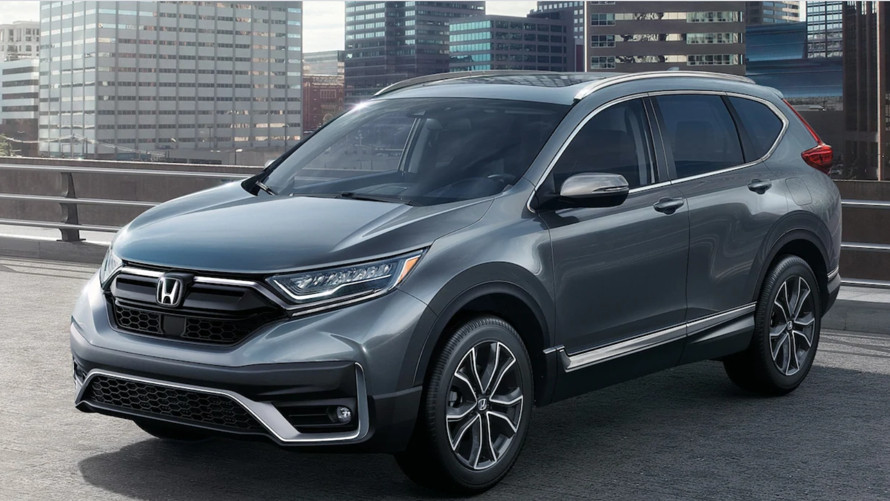 The CR-V wears attractive lines, but it’s overall more conservative than the RAV4. The updated headlights for 2020 at least give it a somewhat futuristic look. The rear window tilts upward, while the taillights remain affixed to the D-pillars, just like they have been on every generation of CR-V since the beginning. Honda’s HMC, +4.78%   new-for-2020 CR-V Hybrid has some extra cladding and silver trim pieces that let you know it’s a hybrid. 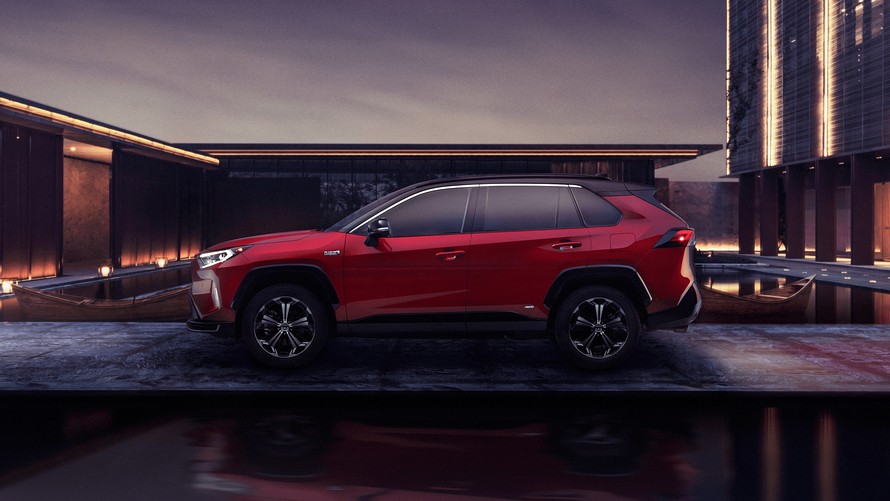 In terms of dimensions, the two vehicles are nearly identical. Overall, the RAV4’s greater variety with regard to aesthetics gives it a leg up in our book.

The CR-V is at the head of its class with regard to passenger room and cargo space. It offers an adult-friendly back seat with loads of room in the rear for all of your stuff. In terms of design, the CR-V’s interior is a little underwhelming and feels a few years behind the curve due to its layout and incorporation of fake wood trim.

The RAV4’s interior is modern, if not futuristic. In redesigning the RAV4, Toyota introduced an entirely new interior layout. The infotainment screen is now perched atop the dashboard similar to a tablet, which brings it up to eye level while maximizing visibility over the dashboard. Two large HVAC dials dominate the center stack, while a cleverly designed storage shelf runs the width of the dashboard. Another design element that speaks to the RAV4’s livelier personality is the use of different interior accent colors for different trim levels. Adventure models get orange accents, Hybrids get blue, and the new TRD Off-Road trim gets red. On certain trims, a knob for selecting different drive modes and off-road settings resides to the left of the gear selector on the center console.

Overall, the RAV4’s interior is more modern than that of the CR-V and gives you a little more to get excited about.

Both the 2020 Honda CR-V and the 2020 Toyota RAV4 employ a single engine for their gas-powered models, and they offer a hybrid powertrain as well. On non-hybrid models, front-wheel drive is standard while all-wheel drive is optional. The RAV4 Hybrid and CR-V Hybrid both come standard with AWD.

The non-hybrid CR-V comes standard with a turbocharged 1.5-liter 4-cylinder making 190 horsepower and 179 lb-ft of torque. With FWD, this engine returns 28 mpg in the city, 34 mpg on the highway, and 30 mpg in combined driving, while AWD models net 27 mpg city/32 mpg hwy/29 mpg combined. The CR-V comes exclusively with a continuously variable automatic transmission.

The RAV4 Hybrid uses a 2.5-liter 4-cylinder paired with an electric motor that sends power to the front wheels, while a second electric motor powers the rear wheels. Total system output is 219 hp. Fuel economy for the RAV4 Hybrid is an exceptional 41 mpg city/38 hwy, and 40 combined — besting the CR-V Hybrid by 1 mpg in the city, 3 on the highway and 2 overall.

More: A first look at Toyota’s plug-in hybrid version of the RAV4

Add it all up, and the RAV4 comes out ahead once again due to its traditional geared 8-speed automatic transmission, more sophisticated AWD systems, more powerful engine and more efficient hybrid model.

The CR-V and the RAV4 can both be had loaded with a healthy amount of modern tech. Both vehicles offer a full array of active safety features as standard on all trims, including automatic emergency braking, full-speed radar cruise control, lane-keeping assist and automatic high beams. The RAV4’s system is a little more sophisticated, though, offering lane-centering capability and traffic-sign recognition. Blind spot monitoring is offered on all but the base CR-V, while the RAV4 makes it optional on all trim levels.

The 2020 RAV4 comes standard with both Android Auto and Apple CarPlay on all trim levels, while the CR-V offers both on all but its base LX trim level. Both vehicles can also be had with a hands-free power lift gate, LED headlights, a heated steering wheel and more. Neither offers a panoramic sunroof, while only the RAV4 offers available ventilated front seats and heated rear seats.

Don’t miss: This car could be Toyota’s best-kept secret

While neither of these vehicles is really an off-roader, the RAV4 offers more features for off-road driving than the CR-V. Multi-Terrain Select and hill descent controls are offered on certain trims, as is a three-prong homestyle power outlet in the cargo area. On top of that, the new TRD Off-Road model adds all-terrain tires and a more robust suspension to the mix. On the other hand, the sporty XSE Hybrid adds a sport-tuned suspension into the mix.

Overall, both of these vehicles cover the basics, but the RAV4 offers more of a wow factor, if you’re willing to pay for it.

The RAV4 starts at just under $27,000 and tops out at just under $41,500. The regular CR-V starts at a little over $26,000 and tops out just north of $38,000 with the fully loaded Hybrid Touring trim. Blame the RAV4’s higher max price on the availability of unique specialty trim levels, while the CR-V keeps things pretty basic. When you compare apples-to-apples, the two vehicles are priced very similarly.

Both of these vehicles are extremely competitive in the compact SUV segment. The both offer fine powertrains and a healthy array of standard and available features. That said, while the CR-V is a little bigger on the inside, the RAV4 is slightly more impressive and, dare we say, exciting and for a number of reasons. It offers more exciting trim levels, such as the rugged TRD Off-Road and sporty XSE Hybrid models, a better interior, more sophisticated active safety tech and slightly better fuel economy from its Hybrid model. For this reason, we’d be inclined to give the RAV4 a nod in this comparison, but rest assured that you really can’t go wrong with either of these segment-leading compact crossovers.