Home
Stocks
The Margin: This is the new frothy coffee craze the internet is buzzing about — and here’s how to make it
Prev Article Next Article
This post was originally published on this site

Jonesing for your fancy coffee fix now that your favorite cafe is closed and you’re sheltering at home? Well, this DIY caffeinated concoction is whipping people into a frenzy.

It’s called dalgona coffee — or whipped coffee: a mixture of equal parts instant coffee, sugar and hot water that is beaten until it reaches a creamy peanut butter-like consistency, which is then spooned over a glass of milk on the rocks. The drink first came into the public eye in January, when actor Jung Il-woo tried it on the popular South Korean TV show “Stars’ Top Recipe at Fun-Staurant.” He likened the drink to dalgona — a South Korean honeycomb toffee candy.

But dalgona coffee didn’t get much buzz outside of South Korea until early March, when TikTok user Hannah Cho (@iamhannahcho) posted a couple of how-to videos for mixing the drink, including one where she whips up a cup for her mom that’s been viewed more than 12 million times, and another where she and her best friend have fun making a mess of it. By March 13, President Trump had declared the COVID-19 outbreak a national emergency, and many states were in the process of temporarily closing non-essential businesses and schools, and encouraging Americans to work from home, if possible. That’s also when Google GOOG, -0.33% saw a spike in searches for “dalgona coffee,” which peaked the week of March 29-April 4, before a resurgence at the beginning of this week. 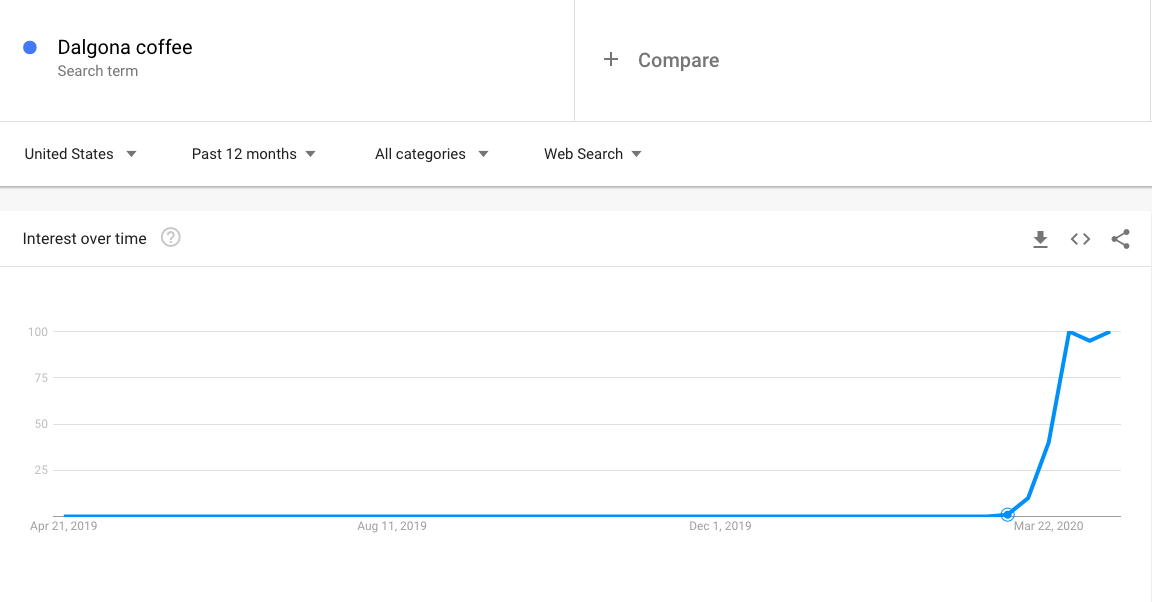 Google searches for “dalgona coffee” spiked in March, before peaking in April.

Now the hashtag #dalgonacoffee has at least 214.3 million views on TikTok. The same hashtag finds almost 300,000 posts on Instagram. And the trend has inspired ASMR-style YouTube tutorials that linger over the sounds of the instant coffee crystals being scooped into the bowl; this clip below has racked up more than 4.5 million views.

Others have tapped their inner barista to put their own spin on it, such as substituting the instant coffee for matcha or cocoa powder to create green tea or mocha variations, or topping the confections with spices or marshmallows. (Indeed, some analysts are concerned that Starbucks customers won’t spend the way they used to once the lockdowns are lifted.)

But considering all of the booze and comfort food that people are turning to while isolating themselves at home (like baking copious amounts of bread), why did a frothy coffee become the first foodie trend to blow up on social media during quarantine?

Stephanie Le, who writes the I am a Food Blog with her husband/photographer Michael, told MarketWatch that she believes dalgona coffee satisfies our craving for that latte or other specialty sip that folks used to grab during their daily commutes or coffee breaks before so many offices and coffee shops closed.

“It’s probably one of the things that people started really missing: their daily coffee fix either from Starbucks SBUX, -1.29% or whatever their favorite coffee place happened to be,” she said. “Dalgona is a cute way to have cafe time at home.”

Plus, even if it can take five minutes or more to whip up that coffee cream just right, this is still a snap compared with spending up to eight days or so cultivating a sourdough starter from scratch. And many people already have the four main dalgona ingredients on hand: instant coffee, sugar, water and milk. “Not everyone has everything they need to make chocolate chip cookies or fun cocktails,” added Le. “(But) almost everyone has instant coffee, and if not, it’s just one ingredient to pick up as opposed to many.”

Here’s her recipe for whipping up two servings of Dalgona coffee:

And here are her five hacks for mixing the perfect cup of dalgona coffee: