Home
Stocks
Market Extra: Small caps had best month in nearly a decade and if history is a guide it may signal a broader market rally, analysts say
Prev Article Next Article

Small-capitalization stocks are coming into focus in the second quarter as a key indicator of the health of the broader stock market rally, after notching their best monthly performance in April since 2011, as investors prepare for another week of corporate earnings and the U.S. Labor Department’s closely watched jobs report, due Friday.

Early stages of bull markets are typically accompanied by small-cap outperformance, analysts say, and therefore bulls can point to the outperformance of the Russel 2000 index RUT, -3.82% and the S&P 600 index SML, -4.03%, which track lower market capitalizations, relative to the benchmark S&P 500 SPX, -2.80% , as evidence that a sustainable bull market is taking shape.

“This is what you expect at the beginning of a rally,” said Steven DeSanctis, equity analyst at Jefferies, who pointed out through Wednesday’s close, the Russell 2000’s performance from its March 18 low almost exactly mirrored its performance over the same time span following the bottom of the market in 2009. By November of 2011, the Russell 2000 had rallied 93.2% compared to the S&P 500’s 66.2% advance.

“We’re getting better news on getting back to a more normal economic environment, and thinking that in the third and fourth quarter U.S. GDP will start to accelerate,” DeSanctis said. “That’s going to be good for small-caps.” 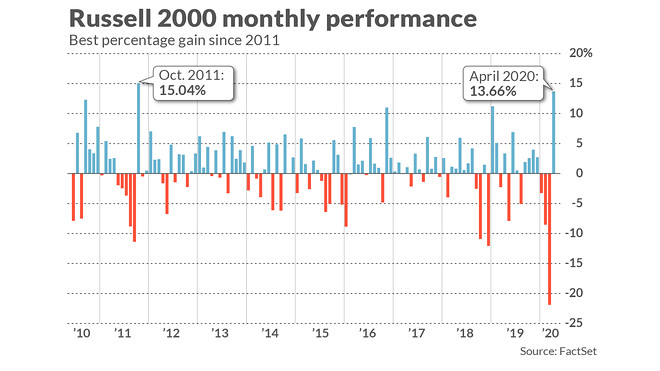 But after consecutive sessions this week when the small caps lagged large caps in a broad selloff that saw the Dow Jones Industrial Average DJIA, -2.55%, S&P 500 index SPX, -2.80% and Nasdaq Composite index COMP, -3.20% erase gains for the week, there’s cause for concern that the Russell 2000’s run was just an oversold bounce in what will prove to be a volatile remainder of the year.

“Tactically there’s been trading around these riskier parts of the market like small caps, but I wouldn’t overplay this trend,” said Matt Miskin, co-chief investment strategist at John Hancock Investment Management. “We advise to look at companies with strong balance sheets, and instead use pockets of strength to trim recent outperformers like small caps.”

Small cap stocks tend to outperform in anticipation of higher economic growth, because a hotter economy creates a better environment for new products and services and because it increases appetite for risky assets. Such an environment also tends to give smaller companies easy access to credit, leveling the playing field with larger rivals.

Miskin said that the market appears to be pricing in a quick and vigorous economic rebound amid optimism that the worst of the COVID-19 epidemic has passed, but “in our view its better to take a more conservative assumption that growth won’t return” until the final three months of the year, at the earliest.

See also: Opinion: Small stocks are sending a big message about a retest of the bear market low

Investors will look for clues on the economic outlook in the week ahead as they parse earnings results and management commentary from dozens of S&P 500 firms including Tyson Foods Inc. TSN, -3.50% on Monday and Walt Disney Co. DIS, -2.45% and Activision Blizzard Inc. ATVI, +1.55% on Tuesday.

In economic data, the big draw will be the U.S. April nonfarm payrolls report due Friday at 8:30 a.m. Eastern Time, which will indicate the number of job losses during the first full month of widespread efforts to combat COVID-19, with the unemployment rate having the potential to see its worst reading since the Great Depresssion of the 1930s.

Other reports include a reading on factory orders in March due Monday and readings of the health of the services sector from IHS Markit and and the Institute of Supply Management on Tuesday. On Wednesday, payroll firm ADP will issue its estimate of private sector U.S. payroll changes and Thursday will feature data on weekly initial jobless claims and productivity in the first quarter.