Home
Stocks
The Tell: The U.S. economy may be in for a ‘square root’-shaped recovery—and you won’t like it any more than algebra class
Prev Article Next Article
This post was originally published on this site

There’s an alphabet soup of possible outcomes for the economy, and now one mathematical symbol, too.

Some strategists expect the shape of the recovery to resemble a “V”: growth rocketing straight up and to the right after months of being pent-up. Others more cautiously propose a gradual curve, like a “U.” Alternately, a “W” might suggest a double-dip recession.

Now add to that alphabet soup a square root, which is what analysts at Ned Davis Research are forecasting. If you thought math class was a slog, the economy visualized by a square-root symbol won’t warm your heart either.

Read:Why the S&P 500 outlook depends on what letter of the alphabet the coronavirus recovery looks like

The Ned Davis analysts, Pat Tschosik and Rob Anderson, didn’t coin the phrase. Famed investor George Soros may have been the first to use it.

At a particularly fraught moment in 2009, just after the stock market bottomed and a few months before the official end of the 2007-09 recession, Soros told Reuters that the economy would naturally bounce a bit after it hit bottom, but then would “settle” into a prolonged period of subpar growth — a “lasting slowdown” that would look like an “inverted square root sign.” 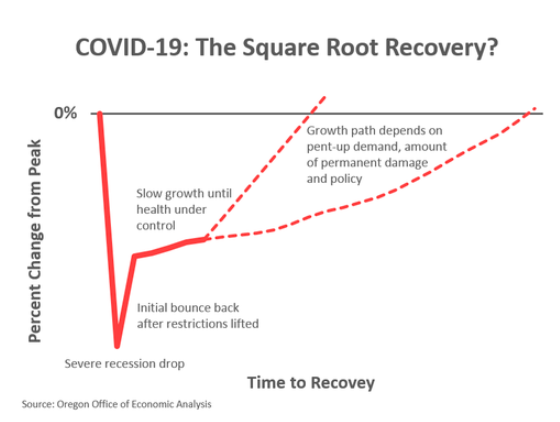 That is a bit gloomier—not to mention arguably the wrong call—than the scenario visualized in the graphic shown above. The chart, from the Oregon Office of Economic Analysis, shows a few options for the trajectory of the economy.

The dotted line on the right is worth paying attention to, because while it signals growth, it also suggests it could take some time for a growing economy to reach the same baseline as before the shock that caused contraction.

Related: The ‘Great Repression’ is here and it will make past downturns look tame, economist says

It is that slower-for-longer trend that informs the Ned Davis team’s thesis. Tschosik and Anderson write, “The market continues to rise on a flattening of the COVID-19 curve and hopes of new treatment and/or vaccine. Absent a high-efficacy vaccine, expect the recovery to settle into the ‘new normal’ of lifted stay-at-home orders, but a cautious, if not unemployed, consumer.”

Perhaps more important to the Ned Davis team is that financial markets are, so far, confirming no “V” is in the works. That would take a “convincing breadth thrust,” meaning a recovery in stocks that’s much more widespread than the one currently under way, which is largely concentrated in technology.

As MarketWatch’s Chris Matthews wrote in late April, market breadth is currently at its lowest since the dot-com bubble two decades ago.

For now, investors seem to be content to look through poor earnings in anticipation of 2021 earnings growth estimates, Tschosik and Anderson say.

How to best trade such an environment? The researchers recommend what they call “Covid Staples,” or pharmaceutical/biotech companies that may benefit from work on virus drugs or vaccines, consumer staples that get a boost from the demand for household products and food, and tech titans like Facebook FB, +0.84% , Amazon.com Inc AMZN, +0.54% , Netflix NFLX, +0.79% , and Microsoft Corp. MSFT, +0.73%, enhanced by “home entertainment software” GAMR, +1.62%.

See:Fool me twice? For businesses and consumers, coronavirus is the financial crisis all over again