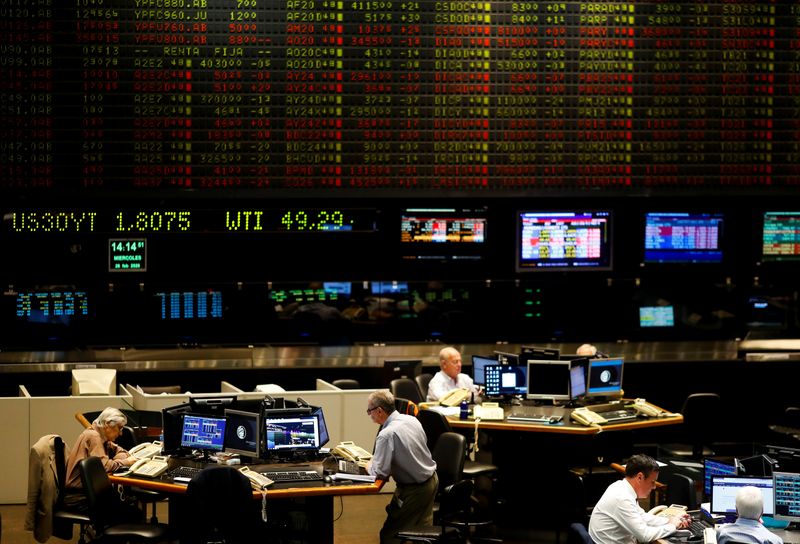 NEW YORK/LONDON (Reuters) – Argentina’s stocks are rocketing, outpacing equity market peers around the world in the second quarter as growing risk appetite has lured investors to the country’s listed firms despite biting economic and debt crises.

The S&P Merval stock index (MERV) plunged near 50% from mid January to mid March. But this quarter, price returns in pesos for the 20-stock index have climbed as much as 100%. When translated to U.S. dollars using the official exchange rate, they are now up 64%, the most among the largest stock markets globally.

Investors jumped in even as Argentina’s government has scrambled to restructure around $65 billion in foreign debt and forecasts called for the economy, mired in recession since 2018, to contract as much as 10% this year.

“There are periods of time where it gets just so cheap that people come rushing and move it to the opposite side for a while,” said Robert Lutts, chief investment officer at Cabot (NYSE:CBT) Wealth Management in Salem, Massachusetts.

Lutts recently added to his holdings of Buenos Aires-based e-commerce giant Mercado Libre (O:MELI) but said he would not broaden his exposure to Argentina partly on concerns over financial markets’ lack of confidence in the country.

Argentina defaulted for the ninth time in May following turmoil sparked last year by the sharp political decline of President Mauricio Macri, seen as a market reformer.

Yet his successor, moderate Peronist Alberto Fernandez, is now seemingly closing in on a debt restructuring deal with international creditors, a development credited as one reason behind the latest leg of the stocks rally.

Some analysts said tight capital controls have added luster to the rally. Parallel trades of the peso value the currency much more cheaply than the official rate, a gap which has widened sharply this year.

“The record in peso terms is more an effect of the currency’s devaluation than anything else,” said Gustavo Ber, senior economist at local consultancy Estudio Ber.

“The stock market is not reacting to fundamentals as much as it is to money flows,” said Ber, adding it was “mostly hot money” meaning traders ready to cash gains.

The Merval is off 12% since hitting a record high on Monday.

Ber said the global “risk-on” mentality was first seen in the performance of Argentine stocks traded in U.S. exchanges and those speculative bets were later reflected in the local market.

The return on Argentina’s American Depositary Receipts (ADRs) is 22% for the quarter so far (BKAR), compared to a 16% increase for the U.S. benchmark S&P 500 (SPX).

What makes Argentina exceptional is that all its major stocks are listed in New York as ADRs, offering international investors an easy way to play Argentina.

“That means a lot of stocks remain investable under a sovereign default which would normally put equities off limits,” said Dubai-based Hasnain Malik, emerging markets equity strategist at Tellimer.

Some like Mercado Libre (O:MELI) and Globant (K:GLOB) offer investors exposure further afield. They are based in Argentina but generate most revenues internationally.

“While there are still massive uncertainties ahead for the sovereign debt restructuring and the economy, there are unique circumstances for one or two of these ADR listings,” Malik said.

Mercado Libre’s ADR is up near 50% this year and 75% this quarter alone. The local stock (BA:MELI), up 137% this quarter, is not part of the Merval index.

Argentina exposure has the sixth-largest overweight among active global emerging market funds at +0.66% above benchmark, according to Copley Fund Research. Some 40% of active Global EM funds in a sample of 224 were invested in Argentina and 38% are overweight the country.

“Confidence is starting to return with ownership and allocations rising over the last 6 months,” said Holden.