Home
Stocks
Market Extra: The Nasdaq Composite is aiming for its longest streak ever without back-to-back losses
Prev Article Next Article
This post was originally published on this site

Quick! When was the last time the Nasdaq Composite Index registered consecutive losing days? It’s been a while.

In fact, the streak has run 48 trading days, including today, going back to the two-session losing period ended May 13. Since then the popular stock gauge has seen a nearly unceasing climb, which now finds the tech-heavy index on the verge of equaling the longest streak without back-to-back losses since May 7, 1978, according to Dow Jones Market Data. 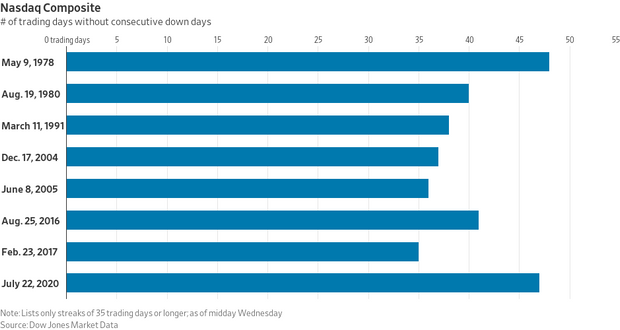 This current financial and economic crisis has been characterized by a remarkable surge in technology and e-commerce companies that are seen as, perhaps, more resilient to the COVID-19 pandemic that has rocked the broader market.

For that reason, the Nasdaq has enjoyed a dazzling degree of buoyancy, following its late-March low, even as its peers have also rallied mightily.

Indeed, the Nasdaq has gained nearly 56% since its March 23 coronavirus-induced low. By comparison, the Dow Jones Industrial Average DJIA, +0.29% has climbed nearly 45% and the S&P 500 SPX, +0.23% has gained nearly 46% over the same period. Both the S&P 500 and the Dow are viewed as less weighted by tech and tech-related companies, so there uptrend has been less stratospheric than the Nasdaq’s.

–Ken Jimenez contributed to this article