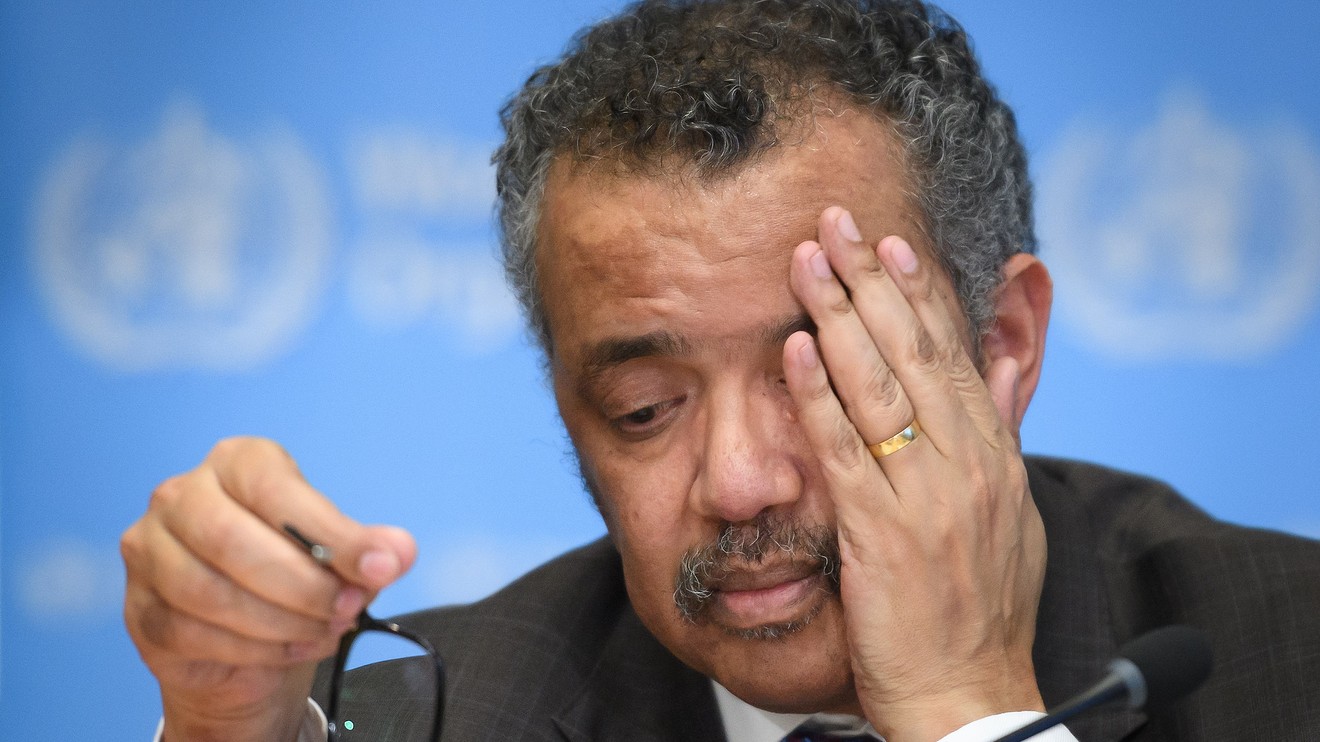 The World Health Organization said a record number of cases of the coronavirus that causes COVID-19 were recorded on Sunday around the world for a total of 307,930 in a 24-hour period, the highest number recorded since the start of the outbreak.

New cases numbers were led by India, which counted 94,372 new infections, followed by the U.S. with 45,523 and Brazil with 43,718, according to WHO data. The Indian spike is due to clusters of cases, and the virus is spreading through community transmission in India and the U.S.

There was alarm after President Donald Trump pushed ahead with his first indoor rally since June in a warehouse in Nevada, at which he addressed a tightly packed crowd of supporters, most of whom were not wearing face masks. The decision to hold the event indoors defied the directive of state officials and his own health experts’ guidelines on gatherings. The last indoor rally in Tulsa, Okla., in June, was blamed for a subsequent surge of new cases, even though it was relatively sparsely attended.

Gov. Steve Sisolak, a Democrat, has since May limited in-person gatherings both indoors and outdoors in Nevada to 50 people, a recommendation based on White House reopening guidelines, as the Associated Press reported. Sisolak said in a statement issued ahead of the rally that Trump was “taking reckless and selfish actions that are putting countless lives in danger here in Nevada.”

“To put it bluntly: He didn’t have the guts to make tough choices,” Sisolak said of Trump’s handling of the virus. “He left that to governors and the states. Now he’s decided he doesn’t have to respect our state’s laws. As usual, he doesn’t believe the rules apply to him.”

Trump is due to travel to California on Monday to be briefed on the wildfires that are still racing across the state. The president has been mostly silent on the fires that have killed dozens of people in Oregon and California.

Meanwhile, journalist Bob Woodward told CBS’s “60 Minutes” late Sunday that Trump told him that “nothing more could have been done” about the pandemic. At the time, more than 167,000 Americans had died from COVID-19, and Trump and his cabinet had been widely criticized for their handling of the crisis, with polls showing Americans dissatisfied with Trump’s approach to the public health emergency.

Trump’s comments were recorded in an Aug. 14 phone interview with Woodward. Last week, excerpts from Woodward’s upcoming book “Rage” revealed that Trump knew the coronavirus was “deadly stuff” early in the pandemic but continued to play down its severity publicly.

“ ‘Nothing more could have been done.’ Does he remember what he told me, back in February, about, it’s more deadly than the flu?” Woodward wondered during his interview with CBS News correspondent Scott Pelley, according to a transcript. “I mean, it almost took my breath away, that there was such certainty, when he was absolutely wrong about the issue that defines the position of this country right now.”

• The WHO warned that it is expecting a fresh rise in daily numbers of COVID-19 deaths in October and November, according to Agence France-Presse. WHO European head Hans Kluge told the agency the recent surge in cases will result in an uptick in deaths. He also cautioned that the development of a vaccine will not necessarily be a panacea.

“And then if we have to order different vaccines, what a logistical nightmare! The end of the pandemic is the moment that we as a community are going to learn how to live with this pandemic. And it depends on us, and that’s a very positive message.”

• Former Italian Prime Minister Silvio Berlusconi has left hospital, after being admitted last week after testing positive for coronavirus, Reuters reported. The 83-year-old Berlusconi told reporters he had survived “the most dangerous challenge of my life.” The politician and media tycoon developed double pneumonia and was deemed a high-risk patient because of his age and underlying medical conditions, Reuters reported.

• Israel has become the first country to reimpose a strict national lockdown that will last three weeks and come into effect this Friday, the Jewish new year, BBC News reported. The move comes after more than 3,000 daily new infections were recorded every day in recent weeks. Israel has a population of about 9 million. It has 156,823 confirmed cases of COVID-19, according to data aggregated by Johns Hopkins University, and 1,126 people in Israel have died.

• New Zealand will remain on its current COVID-19 alert level for at least another week, according to Prime Minister Jacinda Ardern, the Guardian reported. The country has implemented some restrictions after continued community transmission of the virus in Auckland, its largest city. The current gathering-size restriction of just 10 people will be reviewed on Sept. 21, she told reporters at a briefing.

There are now 29 million confirmed cases of COVID-19 worldwide, the Johns Hopkins data show, and at least 924,879 people have died. At least 19.6 million people have recovered.

Brazil has the second highest death toll at 131,625 and third highest case tally at 4.3 million.

China, where the virus was first reported late last year, has 90,211 cases and 4,735 deaths, according to its official numbers.

The chief executive of Pfizer Inc. said the drug company should know whether its experimental COVID-19 vaccine works by the end of October — and, if approved, it could be distributed in the U.S. by the end of the year, MarketWatch’s Mike Murphy reported.

In an interview on Sunday with CBS’s “Face the Nation,” CEO Albert Bourla said there is a “good chance” of getting key data from late-stage trials to the Food and Drug Administration by the end of October, and that the company is already producing the vaccine, just in case.

“We started already manufacturing, and we have already manufactured hundreds of thousands of doses, so just in case we have a good study readout, conclusive, and FDA, plus the advisory committee, feels comfortable, that we will be ready,” Bourla said.

Read:Here’s what you need to know about clinical trials as drug makers push forward with coronavirus vaccine studies

He said Pfizer PFE, +2.92%, which is teaming with German drug maker BioNTech BNTX, +5.37% on the coronavirus vaccine’s development, will absorb a financial hit if the vaccine fails but was adamant about not taking government funding to keep the process apolitical, with CEOs of nine pharmaceutical companies having recently felt compelled to push back against a growing perception that Trump and his administration were pressuring regulators to get vaccines and therapies to market ahead of the Nov. 3 presidential election, pledging that their companies would not seek premature approvals or authorizations.

The Food and Drug Administration earlier this year authorized remdesivir as a treatment for some hospitalized COVID-19 patients, though the drug has not received a full approval at this time. A number of clinical trials are under way that are testing remdesivir in combination with other therapies, including Olumiant. The Phase 3, double-blind, randomized, controlled study testing Olumiant and remdesivir in 1,000 patients was sponsored by the National Institute of Allergy and Infectious Diseases, or NIAID); it found that adding Olumiant to the dosing regimen shortened recovery times by one day, when compared to prescribing remdesivir on its own.

The full data from the trial were not disclosed in the press release. However, Lilly said the NIAID plans to publish the data in a peer-reviewed medical journal. Lilly said that it plans to discuss an emergency-use authorization with the FDA and that it will propose the drug is sold “through commercial channels.” The EUA for remdesivir requires that the federal government distribute the drug.

Finally, Vaxart Inc. VXRT, +47.54%  said it has received the go-ahead from the FDA to begin testing its experimental oral COVID-19 vaccine in a Phase 1 clinical trial. Vaxart said it expects to begin recruiting participants for the open-label study sometime this month.

What are companies saying?

• Cheniere Energy Inc. LNG, +1.95% is planning to issue $1.0 billion of eight-year bonds, joining the many companies issuing record levels of debt during the pandemic. Proceeds will be used to repay part of the liquefied-natural-gas company’s $2.695 billion term loan facility entered into in June.

• Delta Air Lines Inc. DAL, +1.92% and subsidiary SkyMiles IP Ltd. are planning to offer bonds and enter a senior secured term loan facility for an aggregated $6.5 billion. SkyMiles will then lend Delta the proceeds, after depositing a portion in a reserve account. Delta will use the sum for general corporate purposes and to bolster liquidity. U.S. companies have been borrowing at record levels in 2020 during the pandemic.

• Hologic Inc. HOLX, -1.54% is planning to offer $950 million of nine-year bonds, joining the many companies issuing record levels of debt during the pandemic. Proceeds will be used to refinance the medical imaging company’s 4.375% bonds due 2024 and to pay related fees.

• OneWater Marine Inc. ONEW, -10.09%, a recreational boat retailer, announced a public offering of 3.17 million shares. The offering includes 425,000 shares offered by the company and 2.75 million shares offered by selling stockholders. The total shares offered represents about 21.8% of the shares outstanding. Separately, the company said based on quarter-to-date information, it expects fourth-fiscal-quarter revenue increased more than 20% from a year ago, while same-store sales are expected to rise 17%. The FactSet revenue consensus of $248.9 million implies 19% growth. OneWater said quarter-to-date results suggest demand remains “resilient” in the face of the COVID-19 pandemic, as families have increasingly focused on outdoor socially distanced recreation.

• Wyndham Destinations Inc. WYND, +5.41% said gross vacation ownership, or VOI, sales came to $168 million in July and August with the trend improving in August from July. The vacation club company said August VOI sales were down 57% from a year ago, after being down 69% in July, due to the pandemic. Volume per guest improved more than 30% in each month versus the prior-year period. As of Aug. 26, 84% of the company’s resorts and 76% of its sales operations were open. Occupancy at open resorts was 59% in July and 58% in August, and over the Labor Day weekend, it achieved average occupancy of 77%, in line with prior-year levels. Reopenings in Hawaii and California are being pushed out, the company said. “As we said in July, we’re continuing to see the green shoots of the recovery with continued steady growth in VPG as resort occupancy started to rebound while our owners began to enjoy their summer vacations,” said the company. “While many resorts in Hawaii and California have yet to reopen, we’re able to reaffirm key business metrics that demonstrate the resiliency of our business.”