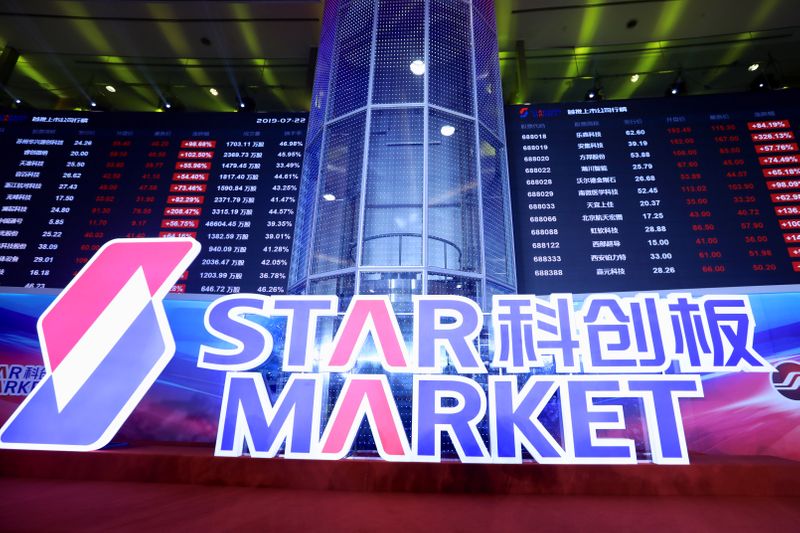 HONG KONG (Reuters) – A fee bonanza on China’s Nasdaq-style STAR Market, which is set to surge with Ant Group’s mega-listing, is passing Western banks by due to their limited local presence and worries about a unique co-investment rule for managing IPOs.

Chinese financial technology giant Ant plans to raise more funds on the year-old STAR than in Hong Kong as part of its up to $30 billion dual-listing, sources have told Reuters.

Regulators dictate lead underwriters for STAR IPOs must buy 2% to 5% of stock on sale and hold it for two years, which bankers and analysts said is risky in volatile financial markets and at a time when many banks face capital pressure.

Companies raised $10.3 billion via initial public offerings (IPOs) over January-July on the STAR Market, making it the second-biggest market globally, showed Refinitiv data, behind Nasdaq but ahead of Shanghai’s main board and Hong Kong.

“That’s a lot of risk you’re holding and that can either work out very well or not,” said an investment banker at a U.S. firm in Hong Kong when asked about the co-investing requirement.

The co-investment rules are aimed at discouraging underwriters from setting IPO prices too high as they need to put some of their money at stake, said the China Securities Regulatory Commission when the STAR Market was launched in 2019.

For the STAR tranche of Ant’s IPO, China International Capital Corp Ltd (HK:3908) and China Securities Co Ltd (HK:6066) are sponsors – the most senior role in an IPO.

Not all Western banks have Chinese underwriting licences, and they struggle to compete with local rivals due to limited securities distribution networks. This could change as China opens up its financial sector, allowing for expansion.

“Chinese banks have led the majority of deals to date although we are beginning to see increased participation from international banks on certain deals,” said analyst Alex Owen at banking data provider Coalition.

All but three of the STAR Market’s 177 listings – raising $38 billion – have been led by mainland Chinese banks.

UBS Group AG (S:UBSG) is the only Western bank to be sole sponsor when it led a $224 million listing in October. Zhong De, a venture between Deutsche Bank AG (DE:DBKGn) and Shanxi Securities Co Ltd (SZ:002500), was sole sponsor of two deals last year.

For those underwriters willing to take the risk, rewards could be lucrative.

Equity offerings at the STAR Market have paid an average of nearly 6% in fees to investment banks in the year since launching, showed Dealogic figures, versus 5.3% for Nasdaq and just 2.4% for Hong Kong.

“Bankers need to set prices themselves, have more expertise, and shoulder more responsibility, so naturally, the fee ratio is higher,” said analyst Li Xingjin at Capital Securities in Beijing.