Home
Breaking News
Exclusive: FAA in final stages of Boeing 737 MAX review; could approve as early as Nov. 18
Prev Article Next Article
This post was originally published on this sitehttps://i-invdn-com.akamaized.net/trkd-images/LYNXMPEGA900E_L.jpg 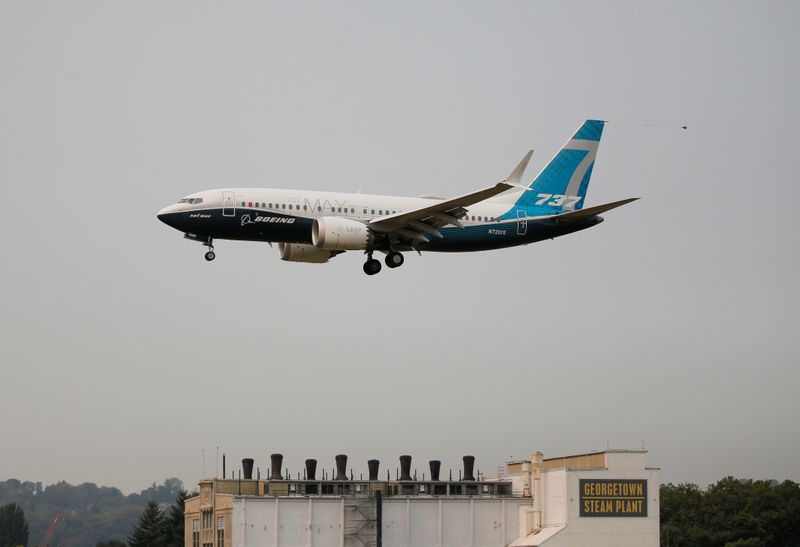 WASHINGTON/SEATTLE (Reuters) – The U.S. Federal Aviation Administration is in the final stages of reviewing proposed changes to Boeing (NYSE:BA) Co’s 737 MAX and expects to complete the process in the “coming days,” the agency’s chief told Reuters on Monday.

Three sources briefed on the matter told Reuters the FAA is set to lift its grounding order on the plane as early as Nov 18.

FAA Administrator Steve Dickson told Reuters in a statement that he expects “this process will be finished in the coming days, once the agency is satisfied that Boeing has addressed” safety issues involved in two fatal crashes that killed 346 people.

The FAA decision comes as other global regulators are also moving closer to decisions on allowing the plane to again resume flights and could approve the MAX around the time U.S. regulators act, the sources said.

The ungrounding would be a vital step in a still-arduous path to recovery for Boeing, plunged into its worst-ever crisis by the crashes and the worldwide grounding of its best-selling plane in March 2019.

“The FAA continues to engage with aviation authorities around the world as they prepare to validate our certification decision,” Dickson said.

“As I have said many times before, the agency will take the time that it needs to thoroughly review the remaining work. Even though we are near the finish line, I will lift the grounding order only after our safety experts are satisfied that the aircraft meets certification standards.”

Following the FAA green light, airlines must complete software updates and fresh pilot training, a process that will take at least 30 days, before the planes can return to the skies.

Southwest Airlines (NYSE:LUV), the world’s largest MAX operator, has said it would take several months to comply with the FAA requirements and that it does not plan to schedule flights on the aircraft until the second quarter of 2021.

The grounding has cost the U.S. planemaker billions, hobbled its supply chain, and triggered investigations that faulted Boeing and the FAA for a lack of transparency and weak oversight during the jet’s development, among other problems.

As the coronavirus pandemic exacerbated the MAX crisis, Boeing slashed production and shed thousands of jobs. It has been locked in negotiations with airlines over taking delivery of some 450 already built 737 MAX planes being stored at facilities around the United States.

Last month, China’s aviation regulator said it had not set a timetable for the plane’s return to service.

Europe’s chief aviation safety regulator said in September the MAX could receive regulatory approval to resume flying in November and enter service by the end of the year.