Home
Stocks
The Margin: Do not miss this: Texas lawyer commits hilarious Zoom fail by keeping kitten filter on
Prev Article Next Article
This post was originally published on this site 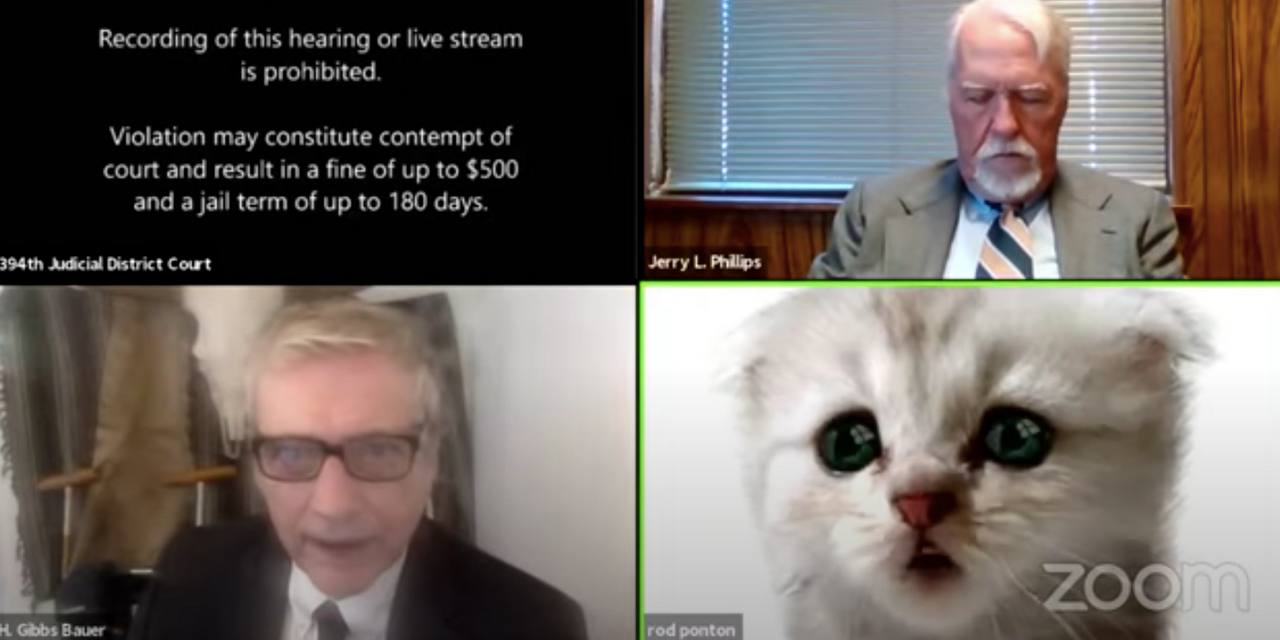 Talk about a faux paws — a Texas lawyer has gone viral by showing up to virtual court with a kitten filter on, in what may be the most adorable jurisprudential mishap ever.

Judge Roy B. Ferguson was presiding over a case for the 394th district of Texas over Zoom ZM, +4.68% when he noticed that one of the attorneys, Rod Ponton, appeared to have been replaced by a fluffy white kitty wearing a very worried expression. And he has posted the video to YouTube GOOGL, -0.44% GOOG, -0.45% and Twitter TWTR, +2.87%, which has resulted in the purr-fect videoconferencing fail to go viral.

“Mr. Ponton, I believe you have a filter turned on in your video settings,” the judge deadpans on the clip that’s already been shared tens of thousands of times on Twitter since he posted it on Tuesday.

In response, the young cat standing in for Ponton flicks its eyes up and down — perhaps scanning the toolbars for a way out of this mess — before looking back up and responding, “Can you hear me, judge?” What makes the scene even more delightful is that the kitten’s mouth moves as Ponton speaks.

Ponton acknowledges on the video that it is indeed a filter, and adds: “I don’t know how to remove it.”

“I’m prepared to go forward,” he says, before delivering this gem: “I’m here live. I’m not a cat.”

Ponton, who has been dubbed “cat lawyer” and “filtered lawyer” by the internet, later told Vice that he was using his assistant’s computer, and “for some reason she had that filter on.” They were able to eventually remove the filter and proceed with the case without further missteps.

The judge suggested that perhaps the assistant’s child had left the filter on, tweeting: “IMPORTANT ZOOM TIP:  If a child used your computer, before you join a virtual hearing check the Zoom Video Options to be sure [sic] filters are off. This kitten just made a formal announcement on a case in the 394th (sound on).”

He also noted that everyone in the virtual courtroom handled the adorable distraction “with dignity, and the filtered lawyer showed incredible grace.”

Some eagle-eyed viewers noted that a disclaimer shown on the Texas legal video notes that recording or live-streaming this hearing was prohibited, and that violating this could result in a fine of up to $500 and a jail term of up to 180 days.  But the judge who shared the clip tweeted that, “These fun moments are a by-product of the legal profession’s dedication to ensuring that the justice system continues to function in these tough times.”

And the puns were flying in no time. “He’s not a lawyer. He’s an advocat,” cracked one.

Some noted the lighthearted video was a welcome distraction from the beginning of former President Trump’s second impeachment trial, as the House impeachment managers aired a video of the Jan. 6 storming of the U.S. Capitol as part of their opening arguments. “Just had the emotional roller coaster of watching the impeachment video followed by the lawyer with the cat filter,” mused one viewer.

“Whew. The human brain is weird that I can spend 2 hours being so angry, anxious and traumatized by the violent insurrection trial and then stumble on this and laugh out some tears from my face,” added another. “Thank you, Lawyer Cat.”

Speaking of the impeachment trial, there were also plenty of jokes that the “cat lawyer” might be preferable to Trump defense lawyer Bruce Castor.

This harks back to the woman who went viral earlier in the pandemic after accidentally logging into a Microsoft MSFT, +0.54% Teams meeting with a potato filter on. “I just kind of gave up and stayed as a potato for the rest of the call,” Lizet Ocampo, who was dubbed the “potato boss,” told Buzzfeed at the time.

And the “cat lawyer” incident isn’t nearly as cringeworthy as when New Yorker writer Jeffrey Toobin exposed himself during a during a Zoom meeting with staffers of the New Yorker and WNYC radio last fall. He lost his job at the magazine and stepped down from his legal analyst role at CNN.

Ponton told the New York Times that he was happy to be a temporary distraction from the pandemic and political turmoil on Tuesday. “If I can make the country chuckle for a moment in these difficult times they’re going through, I’m happy to let them do that at my expense,” he said.