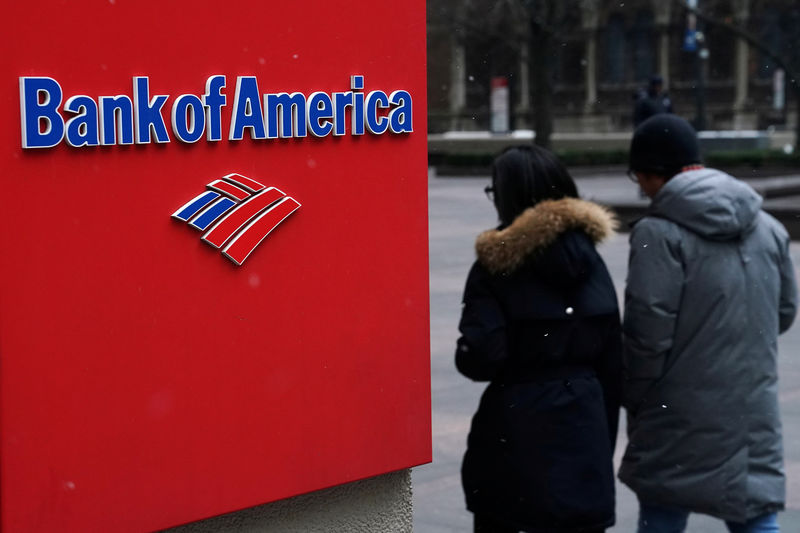 © Reuters. A Bank of America logo is pictured in the Manhattan borough of New York City

(Reuters) – Bank of America Corp (N:) will reward employees for the bank’s strong performance through special bonuses for the third straight year, according to an internal memo viewed by Reuters.

Roughly 95% of the bank’s employees will receive the special bonus this year. Those making less than $100,000 a year will get$1,000 in December, and those making between $100,000 and $350,000 a year will receive stock awards in first quarter of next year. “A critical part of our commitment to making Bank of America a great place to work is our ongoing focus on recognizing achievements and sharing our success,” Chief Executive Officer Brian Moynihan said in a memo addressed to employees.

The second-largest U.S. bank by assets has posted record profits both years since President Donald Trump’s 2017 tax cuts, and has shared some of those earnings with employees through wage increases and special compensation. The bank has paid out about $1.6 billion in special bonuses since 2017 and has set goal of raising its minimum wage to $20 over the next two years from $13.50 in 2017.

The bonuses were reported earlier by Bloomberg.

Last year, the Charlotte-based bank’s board awarded Moynihan a 15% raise for a total compensation of $27 million reflecting a higher variable compensation tied to company performance. Other C-suite executives got bonuses that were on average 9% higher, according to filings.