Home
Stocks
FA Center: U.S. stocks are getting a run for the money from some unlikely parts of the world
Prev Article Next Article

Pigs may not fly, but it appears as though the PIIGS are doing just that.

I am referring to the countries in Europe whose economies several years ago looked like such basket cases that they might be forced out of the European Union and/or lead to the EU’s dissolution: Portugal; Italy; Ireland; Greece, and Spain (PIIGS). Over the past 12 months, their stock markets on average have outperformed the S&P 500 SPX, +0.18%  — as you can see from the accompanying chart. 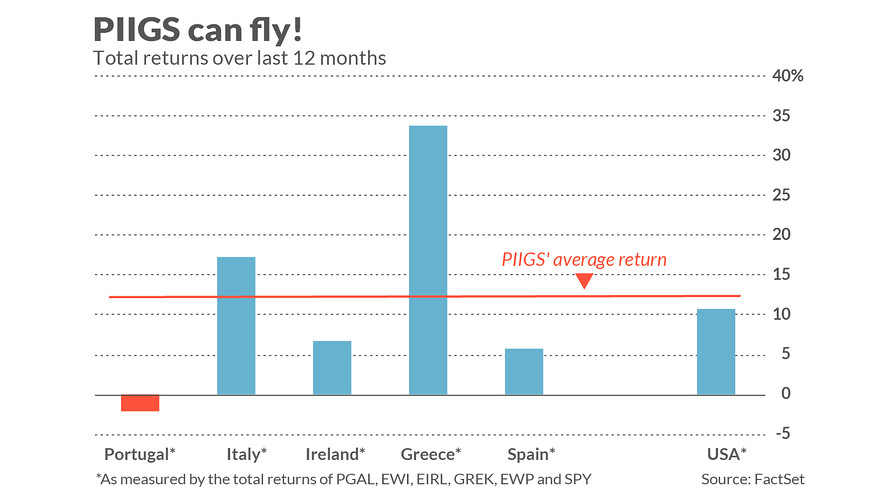 Particularly noteworthy is the performance of equities in Greece — the country whose economy was arguably in the worst shape of any of the PIIGS. Over the past 12 months, the Global X MSCI Greece ETF GREK, -0.20%   has gained about 35% — more than double the return of the S&P 500 SPX, +0.18%  .

These results come as a surprise not just because the PIIGS had looked so bleak. It’s also noteworthy because the U.S. market for years has outperformed its rivals in almost every region of the world. As a result, many U.S. investors have become complacent, in effect forgetting that international stock markets don’t always lag Wall Street.

Might the tide be turning? If so, this shift would be supported by the fundamentals. This is perhaps best illustrated by the Cyclically-Adjusted P/E Ratio, or CAPE, the valuation metric made famous by Yale University finance professor (and Nobel laureate) Robert Shiller. To be sure, as is the case for almost all other valuation measures, the CAPE does not do a particularly good job forecasting returns over the subsequent year. But, researchers have found, its record at forecasting subsequent 10-year returns is impressive.

The table below shows recent CAPE ratios for the U.S. and those of other regions around the world:

As you can see from the table, U.S. equities are more richly valued than any other region — in some cases much more. In fact, among individual countries, only two have higher CAPE ratios than the U.S. This does not bode well for the relative performance of U.S. equities over the next decade.

Note carefully that you can’t wriggle out from underneath this ominous conclusion by arguing that CAPE ratios today deserve to be higher than many decades ago. Many in the U.S. use this argument to dismiss comparisons of the current U.S. CAPE to those in earlier decades of the country’s history. But the table doesn’t compare CAPEs across time; they instead are comparing across countries and regions.

To be sure, for a number of years now the U.S. CAPE has been one of the highest in the world, and so far it has successfully resisted the gravitational pull of its high valuation. Take a column I wrote in April 2014 about an ETF that was divided between the 11 countries with the lowest CAPE ratios: The  Cambria Global Value ETF GVAL, -0.10%  . Since that column appeared, this ETF has produced an annualized return of just 0.6%, according to FactSet — far lower than the 11.1% annualized comparable return of the S&P 500.

But the disappointing return over the past five years of the countries with the lowest CAPE ratios doesn’t mean that these countries will lag forever — unless valuations no longer matter. The last time I heard people argue that valuations are irrelevant was the top of the internet bubble, and we all know what happened next.

None of this amounts to a guarantee that the tide has turned in favor of non-U.S. equities, of course. Recent years have seen many predictions that the tide was turning and, so far, they have all proven to be wrong.

But U.S. equities won’t forever outperform those of the rest of the world, and relative valuations are now even more favorable for non-U.S. equities. So don’t be surprised if you look back a year or two from now and see that 2019 was a turning point.

More:   This may be the perfect time to buy European stocks

Plus: Sign up here to get MarketWatch’s best mutual funds and ETF stories emailed to you weekly!