Home
Stocks
Market Extra: Here’s how the stock market tends to perform after the Fed cuts interest rates 3 times in a row
Prev Article Next Article

Wall Street is bracing for what seems almost assuredly to be a third interest rate cut in as many meetings of the Federal Reserve on Wednesday afternoon.

And although there may be some trepidation about policy makers delivering another dose of monetary easing to a stock market that is at or near records, history shows that the market tends to extend its gains after three successive interest-rate cuts of a quarter percentage point, according to data from LPL Financial (see chart below). 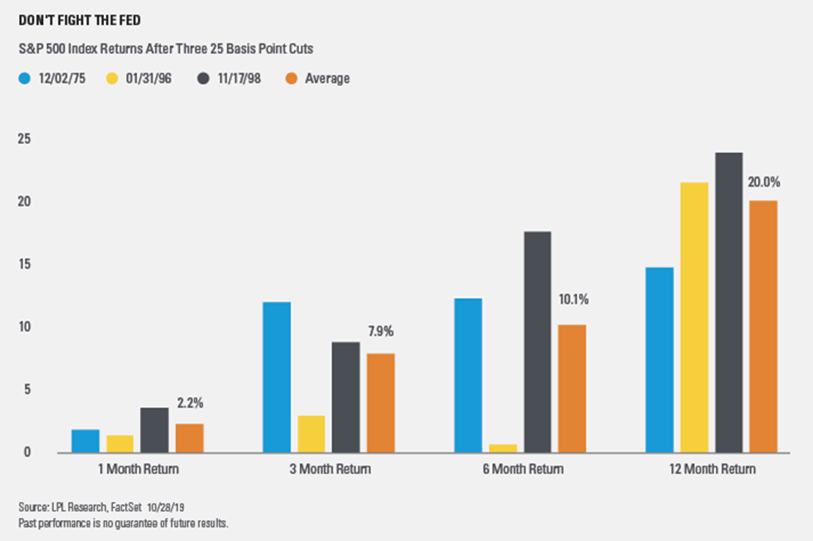 How good have returns been in those periods in which the Fed has delivered a trio of interest rate cuts of 25 basis points ? They have been spectacular in the 6-and-12 month period following those decisions by the rate-setting Federal Open Market Committee.

“We’ve seen periods of economic slowdowns that had three consecutive 25 basis point cuts, most recently in the mid- and late 1990s,” said LPL’s senior market strategist Ryan Detrick. “The good news is the economy accelerated after the slowdowns and stocks did quite as well.” he said.

Of course, gains for the U.S. stock market this year may make it difficult for the Fed to rationalize a third cut.

And if a cut is delivered on Wednesday, how the Fed communicates what happens next could do a lot in helping to influence investor sentiment, notes the Wall Street Journal’s Nick Timiraos. The WSJ said the Fed will be walking a tightrope in leaving its options open to further rate cuts, in this “insurance cut” cycle — implemented to stave off the harmful effects of the Sino-American trade war and a global economic slowdown — as the market and U.S. economy appear OK, for now.

The market isn’t expecting another rate cut until February after Wednesday’s decision.

What’s most likely on Wednesday is a so-called “hawkish” cut, one in which the Fed lowers interest rates as expected but communicates its intention to hold off on further monetary policy easing until further signs of economic weakness appear.

That could be disappointing for Wall Street, at least in the immediate term.