Home
Stocks
Need to Know: A bear-market catalyst is lying in wait for stocks, warns UBS
Prev Article Next Article

If you’d listened to some statisticians you could have seen Monday’s bullish session, and a fresh record for the S&P 500 SPX, +0.12%, coming from a mile off.

Aside from historic patterns to go by, Wall Street had encouraging trade chatter and earnings on its side. But Tuesday is looking tougher as investors face up to disappointing results from Alphabet, Google’s parent company, while Apple AAPL, -0.98% and Facebook FB, +0.11% report earnings on Wednesday.

We’re also a day away from a potential interest-rate cut from the Federal Reserve. Expectations of this have been credited by some for helping stocks rebuild strength since October’s rocky start.

But our call of the day from strategists at UBS warns a big threat is lying in wait for equities: earnings expectations.

“Every bear market of the past 50 years has witnessed an actual decline in S&P 500 forward earnings,” says lead strategist Francois Trahan, who lays out a deteriorating landscape in a note to clients.

He says the consensus year-on-year growth rate in S&P 500 forward earnings has dropped to a mere 1% from a peak of 23% in September 2018. And leading economic indicators, which forecast future activity and can offer clues on future earnings trends, also hint at more weakness ahead, as this chart shows: 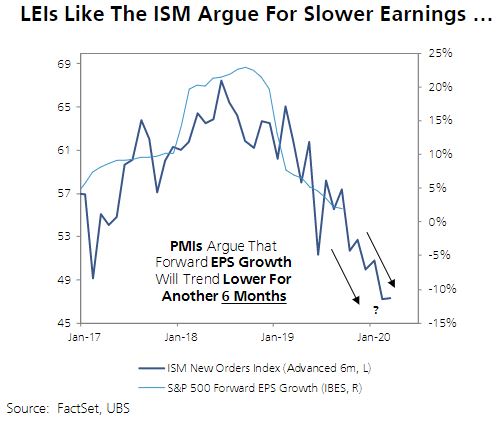 He also suggests investors do not count on the Fed throwing stocks a lifeline here because interest rates and equities are positively correlated at present, which means if rates are lower stocks will follow, as was the reaction after the last two cuts.

Read: The U.S. is like a banana republic and a depression could be on the way, warns money manager

Plant-based meat alternatives have been all the rage, but shares for one big company in that space, Beyond Meat BYND, -17.12%, got a poor reception late Monday to the first profit in the company’s history, as our chart of the day shows. 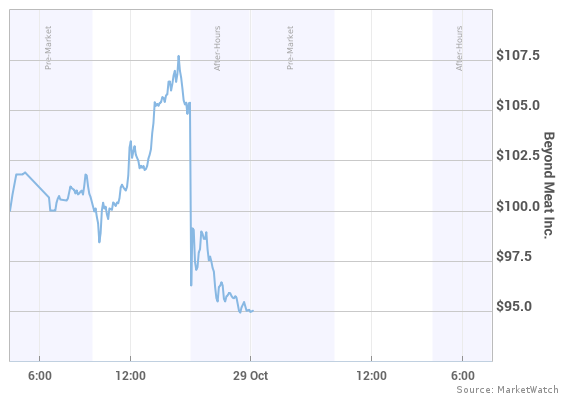 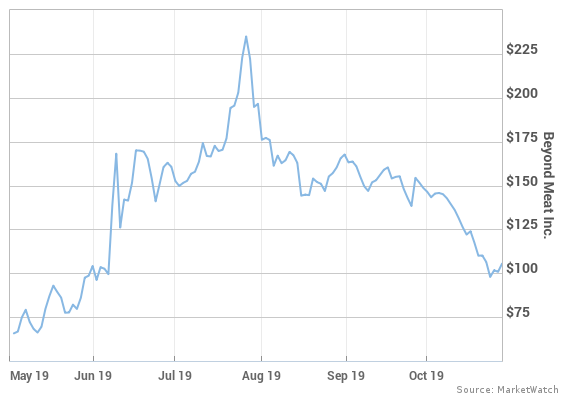 A brief history of Beyond Meat

Shares of Alphabet GOOGL, -1.63%  are off after an earnings miss (read all about the company’s recent spending spree). And stock in online food delivery group Grubhub GRUB, -41.35% is off due to disappointing results.

Pacific Gas & Electric PCG, +16.05%  says its power lines may have started two wildfires; it will cut more electricity on Tuesday as several blazes burn across the state.

Case-Shiller home prices, consumer confidence and pending home sales are all ahead. A two-day Fed meeting, which is expected to produce an interest-rate cut, also kicks off.

U.K. will melt down thousands of commemorative 50-pence Brexit coins