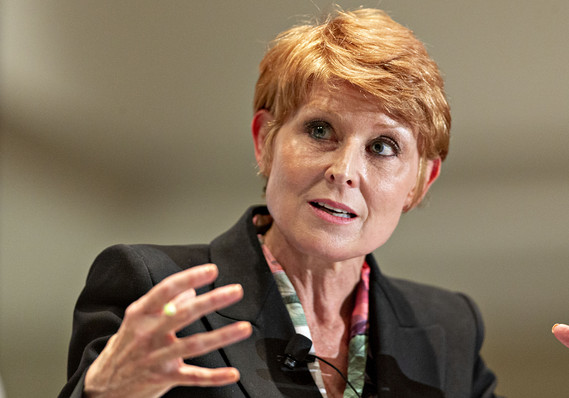 Diane Swonk is the chief economist at Grant Thornton LLP in Chicago.

Economists who are known for sometimes not agreeing about the time of day are currently in lockstep about the outlook for U.S. monetary policy.

There is wide consensus among Wall Street economists that the Federal Reserve will cut interest rates by a quarter of a percentage point on Wednesday following a two-day policy meeting. That would be the third rate cut in successive meetings.

One of the only outliers to this consensus is Diane Swonk, chief economist at Grant Thornton.

Technically, Swonk is of the opinion that the Fed’s decision to cut or pause at the October meeting is a 50-50 proposition, but she’s clear as to what she believes the central bank should be doing. “I think they should pause,” Swonk said in an interview with MarketWatch.

She noted that a decision on Brexit doesn’t look imminent and that there is a quasi-truce in the U.S.-China trade war. So, in her view, it is a good time for the Fed to pause and wait and see if the two rate cuts to date have had any positive effect. “You take your time when you can,” Swonk said.

One critical factor persuading Fed watchers that a rate cut is in the works is that the markets expect the Fed to ease, and that the recent easing has improved financial conditions and helped the economy.

So most economists see it as important that the Fed follow through with a rate cut to maintain current financial conditions.

Economists have observed that Fed officials have had many chances to “push back” on the market’s view, and they have not done so. “The Fed could have gently steered the market in a different direction,” said Avery Shenfeld, chief economist of CIBC Capital Markets.

Now, if the Fed were to decide at this week’s meeting to hold rates steady, this will send a “shock wave” through financial markets, Shenfeld added.

Swonk doesn’t think so, she said. She noted that the market expects one cut by the end of the year, and so a nonmove wouldn’t be so disruptive.

Fed policy makers, she said, opted not to push back on the market expectations because “they didn’t know what the news flow was going to bring them.”

Fed officials have played their cards notably close to their vests over the past six weeks.

Our latest roundup of the best in Fed speak shows key central bankers really didn’t want to tip their views about the October FOMC. https://t.co/ceGBYpXdXf

Many who expect a rate cut a week from now think it will be a “hawkish cut,” meaning the Fed statement accompanying the decision will signal a pause after the move.

To Swonk, this would be counterproductive. “That’s bad communication. It would not be communicating reality or intention,” she said, noting that the Fed needs to maintain an option to cut further. So it is a better idea to pause now and leave the door open for later in the year, she argued.

Swonk is not a newcomer to the Fed beat. She’s been watching the Fed since the mid-1980s and is a former president of the National Association for Business Economics.