Home
Stocks
The Margin: The internet was born 50 years ago — this timeline tracks the rise of tech giants like Microsoft, Apple and Amazon
Prev Article Next Article

What a difference half a century makes.

On Oct. 29, 1969, a UCLA computer science professor and a graduate student sent the first digital transmission from their computer to another one at the Stanford Research Institute.

That first “L” and “O” (intended to be “login,” but the system crashed after sending the second letter of the word) sent across California through the ARPANET network of academic computers was the forerunner of the internet as we know it today.

That’s opened the door for the texts and DMs, emails and cloud services, web pages and social media accounts, online shopping sites, mobile banking, cat videos and all of the other online activity and transactions that have us staring at our screens for more than 11 hours a day.

The internet also launched the tech boom (and 2000 bust, and later resurrection) that has spawned the first trillion-dollar U.S. public companies in Apple AAPL, -1.96%, Amazon AMZN, -0.53%  and Microsoft MSFT, -0.73%. It has led to the social media conundrum where people are more “connected” than ever, at least digitally — but also more exposed, through networks like Facebook FB, +0.18%, Twitter TWTR, -0.57%  and Snapchat SNAP, +0.17%. Companies like Google GOOG, -2.28%  have become a verb. And streaming services such as Netflix NFLX, +0.25% and Hulu have ushered in watching movies and TV on demand from anywhere, leading many cable customers to cut the cord — and spurring a battle of the streaming services that sees Disney DIS, -0.63%  and Apple launching their own in November.

Here’s a look at how the internet gave birth to the FAANG stocks, and some highlights along the way that have defined modern life as we know it. 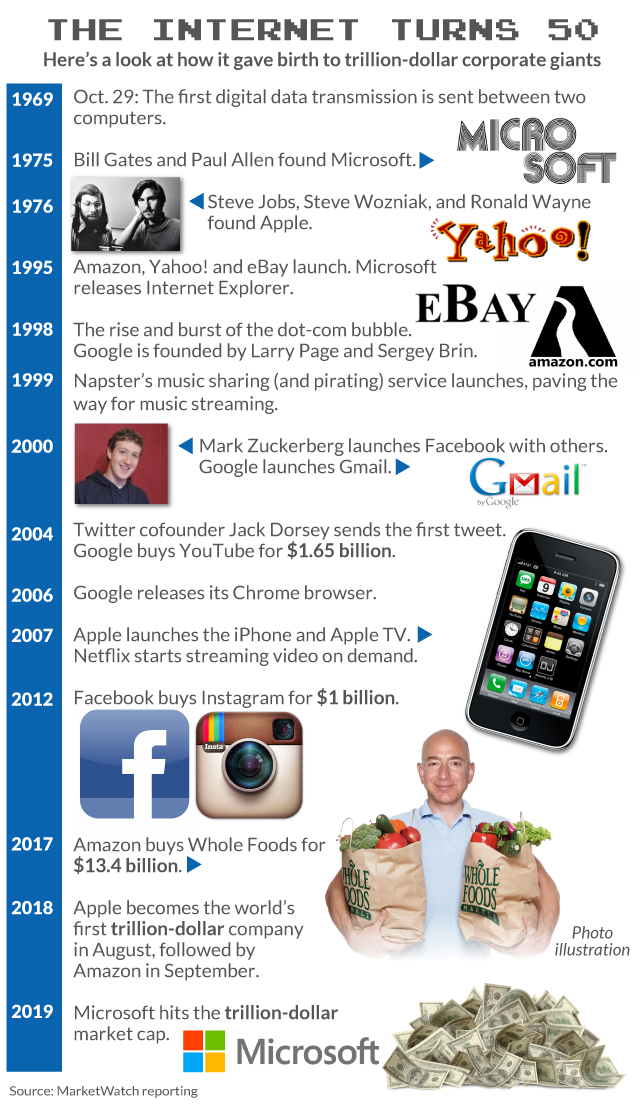