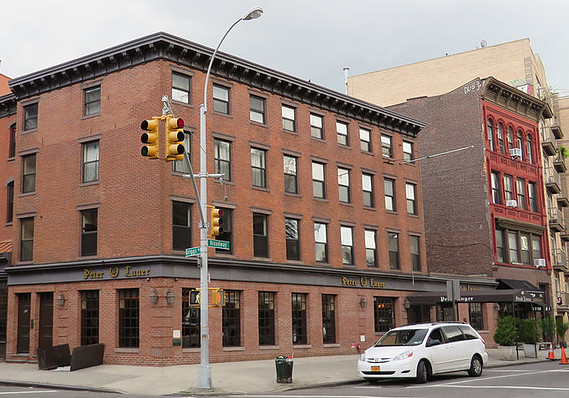 The famed steakhouse opened as Carl Luger?s Café, Billiards and Bowling Alley in the Williamsburg section of Brooklyn. A second location is located on Long Island.

New York institution Peter Luger has been ripped as a washed-up, overpriced scam in an excoriating zero-star review by the New York Times.

The blistering critique by restaurant critic Pete Wells plunges in the steak knife — describing the South Williamsburg eatery’s porterhouse as “far from the best New York has to offer.”

“And after I’ve paid, there is the unshakable sense that I’ve been scammed,” Wells wrote on Tuesday under the headline “Peter Luger used to sizzle. Now it sputters.”

The review has sparked a chorus of online commentary from unsatisfied rank-and-file restaurants who agree the lauded steak icon, which opened in 1887, is no longer worth its long waits and seismic bills. “I feel like that Peter Luger review has been coming for a while now,” wrote Phil Hughes on Twitter, calling the restaurant “wildly forgettable in every way.”

Wells’s appraisal comprises a laundry list of complaints, describing the waiters as rude, the food dreadful and the management miserable.

The shrimp cocktail tastes like “cold latex dipped in ketchup and horseradish,” while the once-delicious German fried potatoes are now “mushy, dingy, gray and sometimes cold.”

“Was the Caesar salad always so drippy, the croutons always straight out of a bag, the grated cheese always so white and rubbery?” Wells pondered.

“You start to wonder who really needs to go to Peter Luger, and start to think the answer is nobody,” he added.

‘Diners who walk in the door eager to hand over literal piles of money aren’t greeted; they’re processed.’

Dubbed one of the best steakhouses in the city — and the recipient of a Michelin star — porterhouse for four will lighten your wallet by $229.80.

But Wells accused the 132-year-old institution of being incapable of producing a delicious and well-cooked slab of boeuf — calling the kitchen well past its prime.

“It rarely achieves a hypnotic or compelling or even interesting [steak],” Wells lamented in the devastating review.

“What gnaws at me every time I eat a Luger porterhouse in the realization that it’s just another steak, and far from the best New York has to offer,” he added. “Other restaurants, not just steakhouses, can put a formidable crust on both sides of the cut; Luger caramelizes the top side only, while the underside is barely past raw, as if it had done all its cooking on the hot platter.”

The other rub for the famed food critic was what he called the gouging of customers by a management he believed “seems to go out of its way to make things inconvenient.”

“Diners who walk in the door eager to hand over literal piles of money aren’t greeted; they’re processed,” he said. “The Department of Motor Vehicles is a block party compared with the line at Peter Luger.”

“Guy Fieri, have you eaten at your new restaurant in Times Square?” Wells wrote. “Hey, did you try that blue drink, the one that glows like nuclear waste? The watermelon margarita? Any idea why it tastes like some combination of radiator fluid and formaldehyde?”

This story previously appeared at NYPost.com.