GrubHub Inc. stock plummeted 42% in Tuesday trading after the company explained in a shareholder letter that customers are spreading their business across a number of online food ordering and delivery businesses, driving the need for a new approach to acquire and retain diners.

“For years, we saw in our data that a Grubhub diner was extremely loyal to our platform,” the letter said. “However, our newer diners are increasingly coming to us already having ordered on a competing online platform, and our existing diners are increasingly ordering from multiple platforms. We find this ‘sharing’ to be greatest among our newest diners, in our newest markets, but believe it is happening to some degree throughout our diner base.”

Grubhub GRUB, -41.60%   has a strategy that it’s going to implement over the next 12-to-18 months “to increase restaurant supply aggressively while making our diner experience more sticky.” Small- and medium-sized businesses are a focus.

On the earnings call, Matthew Maloney, Grubhub’s chief executive, began by walking back the shareholder letter, saying that the conditions described are true for the industry, not just Grubhub.

“To be clear, a very small fraction of our diners use other platforms in general and the newer of our diners use multiple [platforms] with a much greater frequency,” he said, according to a FactSet transcript. “The older cohorts are definitely more stable, but we think that small parts of those cohorts are testing the waters at different points and that’s why closing the restaurant gap is so important.”

Also: McDonald’s expected to jump into the chicken sandwich war next year: KeyBanc

Bank of America slashed its price objective to $30 from $98. 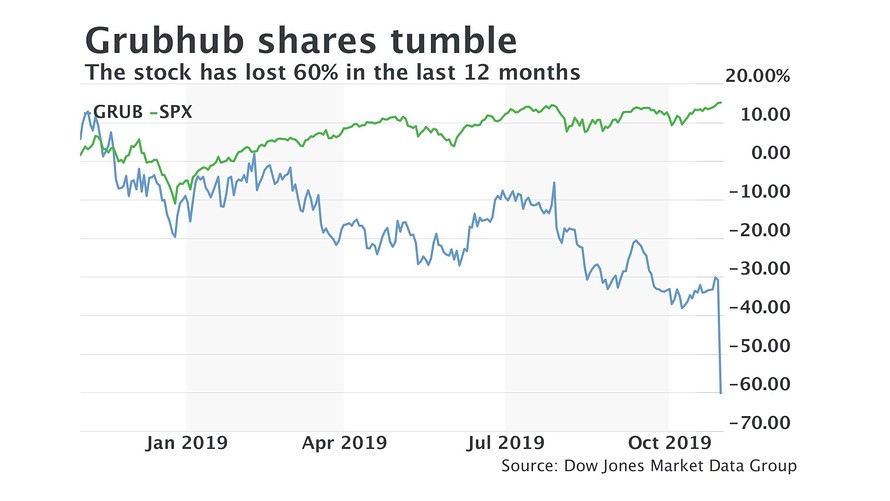 Grubhub was also downgraded at Oppenheimer, to underperform from outperform. Analysts dropped their price target to $34 from $91.

In Grubhub’s letter, the company said it plans to double the number of restaurants on its platform by the end of 2020, help with loyalty programs, and take other steps.

BTIG analysts say there’s no telling how long these measures will take to show results.

“We view this as a material change in tone and strategy, which could take several years to bear fruit that will not be well received by investors,” analysts said in a note before the earnings call.

“Aside from incremental spending to defend market share and increase restaurant inventory, we are unclear as to the path forward from here. Given the turmoil many of these delivery platforms are enduring, we believe consolidation is becoming more likely.

Founded in 2004, and based in Chicago, Grubhub is an online food ordering and delivery platform that connects diners with local takeout restaurants. As of Q1 2019, the company had about 20 million active users and 115,000 associated restaurants across 2,200 cities in the U.S.