Home
Stocks
The Tell: The signals are ‘loud and clear’ — a new bull market is underway, strategist says
Prev Article Next Article

Stocks just took out new highs, the Federal Reserve continues to pump money into the U.S. economy, equity valuations are looking rather toppy, and there’s an abundance of fear peddling among Wall Street pundits.

Proof: ‘We are all screwed!’ The U.S. is like a banana republic and a depression could be on the way

What’s it all mean? Well, good things for investors, according to the latest take from Callum Thomas, head of research at Topdown Charts.

“Something very interesting is happening right now in global equities, and most people have probably missed it,” he wrote. “A set of unique indicators have put in some rare signals that are usually only seen at the start of a bull market.”

Yes, he believes a new bull market is here.

“This flies in the face of the current conventional wisdom that the global economy is heading into recession,” Thomas said, “so it’s a bold statement.”

He started with a look at this chart of the number of countries making 52-week stock-market highs, which just reached a level not seen in two years: 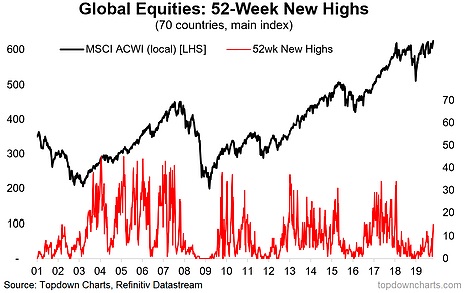 “It’s a classic bull market commencement signal, and we saw this at the start of the last 3 cyclical bull markets (2009-11, 2012-15, 2016-18),” Thomas wrote. “Ideally we want to see more countries making new 52-week highs [and] basically for the strength to spread across markets and to maintain.”

Next, he pointed to an unusual indicator tracking the proportion of countries whose equity benchmarks are up at least 20% from annual lows.

“Why would this be interesting?” he asked. “Very simply, it is a crude approximation of the number of countries in a bull market, where 20% is the (albeit somewhat arbitrary) rule of thumb for whether a stock index is in a bull market.” 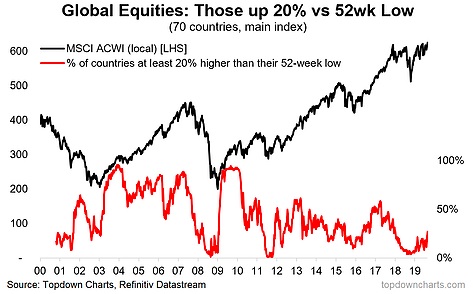 “With this indicator you basically want to see it collapse, and then turn up (like now) to signal a major market bottom and subsequent bull market in global equities,” Thomas explained. “This chart served me well in building conviction on my bullish global equity call in 2016, so it’s something I’m watching closely now.”

Lastly, he’s watching the proportion of countries whose main equity benchmarks are positive on a year-on-year basis. 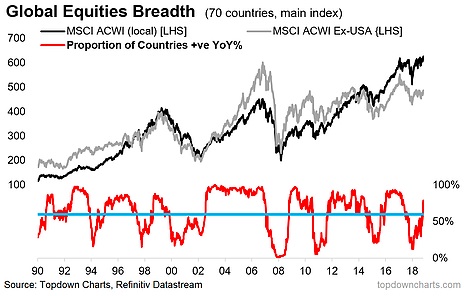 “It’s very much a similar picture to the other two charts, but this one I think is even more interesting given how at its worst point back in January it was only matched by the financial crisis and the Eurozone debt crisis,” Thomas wrote. “What’s also interesting is how it has crossed up through that key threshold — basically sounding loud and clear a signal that a new bull market is underway.”

It’s not just these three breadth indicators that are delivering the “clear and classic picture of a new cyclical bull market,” he said, adding that there’s more than the technical case for buying into equities.

Thomas said he believes global equities are looking like a bargain, and, relative to bonds, the equity risk premium is attractive. He also pointed out that institutional positioning remains fairly light — a contrarian bullish signal.

“And perhaps most important of all,” he concluded, “the global monetary-policy pivot is clear, material, and reinforces my core view that we see a rebound/re-acceleration in the global economy heading into 2020 (call it a late-cycle extension).”