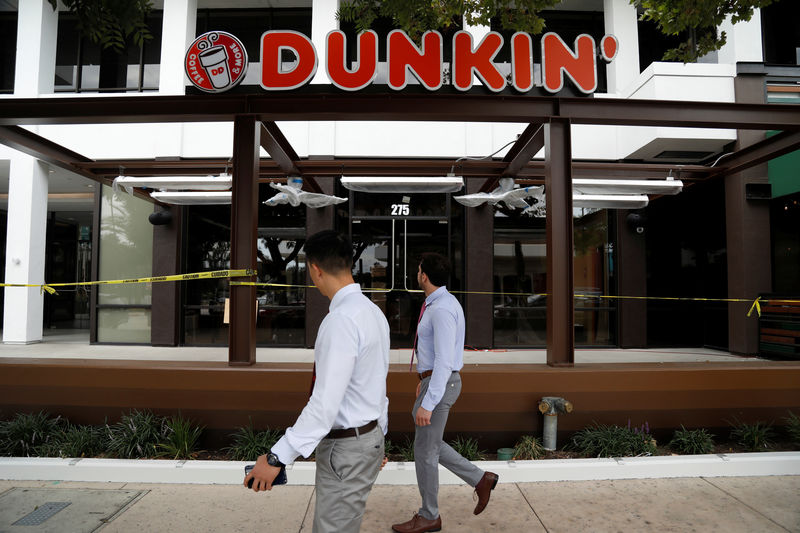 Shares of the company, whose brand has been built around donuts and coffee, climbed 6% to $78.43 in morning trading.

Besides pushing for speedy delivery and introducing new menu items, the company has also latched on to the plant-based meat trend that has taken over the restaurant industry, by rolling out Beyond Meat (O:) breakfast sandwiches.

“We believe it’s a trend and not a fad,” Chief Executive David Hoffmann told Reuters in a phone interview, adding that the chain put its unique “Dunkin’ spin on it.”

It will be the first breakfast restaurant to launch a plant-based protein nationwide when it rolls out its Beyond Sausage Sandwich on Nov. 5 after successful tests in Manhattan and a few other areas.

Sales at its U.S. Dunkin’ stores open more than an year rose at a slower-than-expected pace, growing 1.5% in the third-quarter ended Sept. 28, below 1.7% estimates, according to IBES data from Refinitiv.

It also saw a decline in traffic versus Starbucks’ 3% gain. Dunkin’ didn’t provide details on the drop in traffic.

“Although we believe espresso, along with targeted $2 afternoon beverage promotions, helped deliver afternoon traffic, it likely was not enough to offset the traffic decline” in the core morning part of the day, Maxim (NASDAQ:) analyst Stephen Anderson wrote in a note about Dunkin’.

“We know there is more to be done. The consumer, we think, is strong. We are seeing a really good, healthy consumer,” Hoffmann told Reuters.

Dunkin’s DD Perks loyalty programme had 12 million members at the end of the third quarter as it continued to boost its digital programs.

“We know we’ve got some gaps to close in terms of our loyalty and also mobile order and pay,” Hoffmann told investors during an earlier call.

General and administrative expenses fell nearly 6% in the quarter.