Home
Stocks
Economic Preview: U.S. October jobs report is likely to be a big dud, but not because the labor market is tanking
Prev Article Next Article 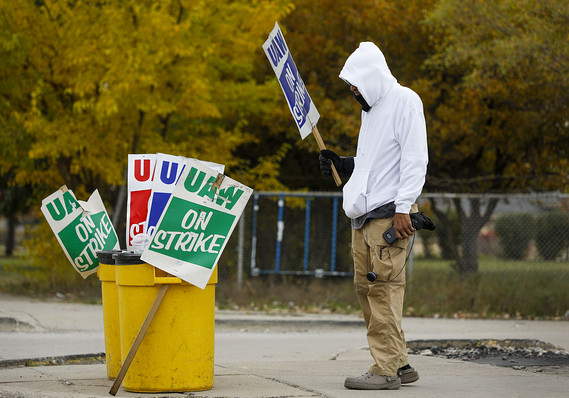 A strike at General Motors depressed employment growth in October by as many as 50,000 jobs.

A big dud. That’s what Wall Street suspects when the government tells us how many new American jobs were created in October.

Not just because hiring in the U.S. has slowed, although it has. A six-week strike at General Motors might play an even bigger role. Here’s what to watch in the employment report due Friday morning.

Economists polled by MarketWatch predict the U.S. added a meager 75,000 new jobs last month, down from a lackluster 136,000 in September. 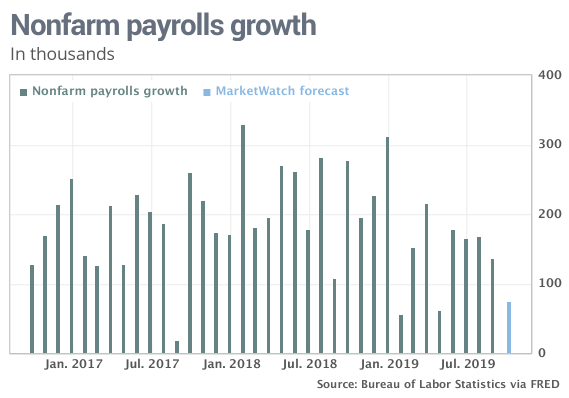 Such a Lilliputian tally would come with a huge caveat, however. The GM GM, -2.32%  strike kept at least 47,700 people out of work, the Bureau of Labor Statistics estimates. And perhaps more if workers at parts suppliers are included.

So add at least 50,000 to the headline number and go from there.

The nation’s jobless rate is forecast to rise slightly to 3.6% from a 3.5% reading in August that was the lowest in 50 years.

Don’t read much into any increase in the unemployment rate. The pace of layoffs have clung near a 50-year low since the start of the year and have shown no sign of rising. Businesses aren’t hiring as many workers, but they’re not firing many, either.

The average worker’s pay rose steadily from 2014 until earlier this year, when the yearly increase in wages topped out at a 10-year high of 3.4%.

Wage growth has slowed since then to just under 3% a year. Not bad, but disappointing in light of how tight the labor market is. Nor is it enough to push the economy to fresh heights.

Economists predict wages gains will cling to around 3% year over year.

Hiring in heavy industry softened considerably before GM GM, -2.32%  workers struck. American manufacturers had created just 41,000 net new jobs in the first nine months of 2019 even before the labor standoff.

The strike could basically wipe out all the gains for the year, but take it with a grain of salt. These jobs will be added back in November — and make the November report look a lot stronger.

Retailers in the dumps, too

The slowdown in hiring in 2019 largely reflects weakness in manufacturing, construction and retail.

The traditional retail industry, under siege from Internet rivals, has reduced employment for eight straight months. Many forecasters predict another decline.