Home
Stocks
Mark Hulbert: What are the odds the market will crash during your retirement years?
Prev Article Next Article

What would a stock market crashed during your retirement years do your finances?

While few retirees or soon-to-be retirees ever stop to ask that question, they should—unless their equity exposure is so low that a crash wouldn’t materially impact their retirement financial plan. So for this column, I’m using the 32nd anniversary of the 1987 crash—which was officially “celebrated” on Oct. 19—to ask the question for you.

Many dismiss the 1987 crash, the worst in U.S. stock market history, as a one-off event—with no historical relevance. They furthermore add that, even if the market were otherwise wanting to crash, government safeguards that were put in place in recent years would prevent it from doing so. As you will see, I will argue that both of these arguments are wrong.

In making that bold assertion, I rely heavily on a study conducted a number of years ago called “Institutional Investors and Stock Market Volatility,” by Xavier Gabaix, a finance professor at Harvard University, and three scientists at Boston University’s Center for Polymer Studies: H. Eugene Stanley; Parameswaran Gopikrishnan, and Vasiliki Plerou. They came up with a formula that predicts the frequency of stock market crashes over long periods of time.

I’ll get to their formula in a minute, but notice that—if they’re right—crashes are inevitable. We therefore are kidding ourselves if we think crashes are one-off events that will never reappear.

To appreciate what the professors found, imagine yourself retiring at age 65 with a life expectancy of 30 years. Using their formula, we can calculate the likelihood of a market crash during your retirement.

The accompanying chart reports the probabilities. Of course, the bigger the crash the lower the probability. But the odds of a huge crash are still high enough that you should expect at least one, and perhaps more, during your retirement. 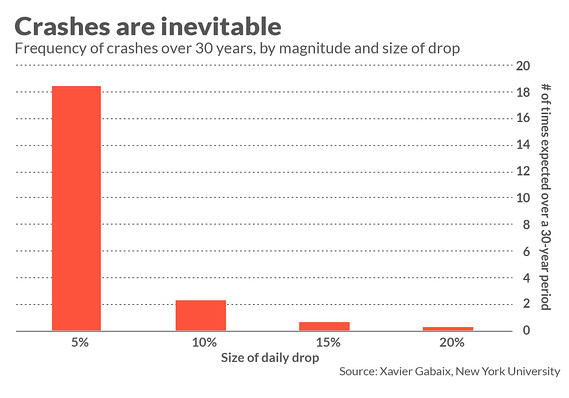 Consider first a 15% daily drop which, at current levels for the Dow Jones Industrial Average DJIA, -0.60%, translates to a daily decline of around 4,000 points. According to the professors’ formula, there’s a 67% chance that such a drop will occur at some point over your 30-year retirement.

Note carefully that this doesn’t mean crashes of this magnitude occur like clockwork every so many years. The formula instead predicts what their average frequency will be over long periods. So it’s possible that you will see no 15% crash during your retirement—or suffer through more than one. But for planning purposes you are on shaky ground if you have arranged your retirement finances on the assumption that such a crash will not occur.

What impact would a 15% daily drop in your stockholdings have on your retirement finances? There’s no one answer, of course, since it depends on the equity exposure of your portfolio and whether you have the flexibility to alter your spending when your portfolio loses significant value.

But the biggest impact of such a drop could very well be psychological, prompting some skittish retirees to go to cash. That could have terrible long-term consequences, of course, since the longer term performance of other asset classes is dismal. In the case of many segments of the bond market, for example, the expected return is negative in inflation-adjusted terms. So getting rid of equities could very well lead to a big drop in retirement spending.

The chart also shows the expected number of smaller crashes. Over the next 30 years, according to the professors’ formula, you should expect 18 daily drops of at least 5% — equivalent to a drop of more than 1,300 Dow points. That’s a little more than one a year. (Over the last 30 years, it’s interesting to note, there have been 15 such daily drops—slightly lower than the formula’s prediction but still remarkably close.)

Why governments are helpless to prevent crashes

Many of my clients, when presented with this data, insist that regulations and safeguards instituted by the government and stock exchanges will prevent crashes from occurring in the future. The researchers believe they are kidding themselves.

That’s because of why crashes occur in the first place, according to Professor Gabaix. They take place, he explained to me in an interview, because there inevitably will be occasions when, for any of a number reasons, large institutional investors will simultaneously want to get out of stocks. And when they want to get out, they will find ways of doing so.

That’s because the markets are globally interconnected and U.S. regulations are largely powerless to restrict sales outside the U.S. Take circuit breakers, trading halts and the like, for example. However effective they might be on U.S. exchanges, and many have serious doubts that they are, they in any case will be powerless to prevent the sales of U.S. stocks that are listed on foreign exchanges or via the short sale of stock-index futures contracts or options.

The bottom line? Retirees and soon-to-be retirees need to face squarely not just the possibility, but the probability, of one or more stock market crashes during their retirement years. This realization should in itself be a source of solace, so that you aren’t surprised when one does occur.

Furthermore, if you are the kind of investor who would be so psychologically scarred by a crash that you would want to go to cash if one did occur, then you should alter your retirement financial plan now so as to reduce and/or hedge your equity exposure.