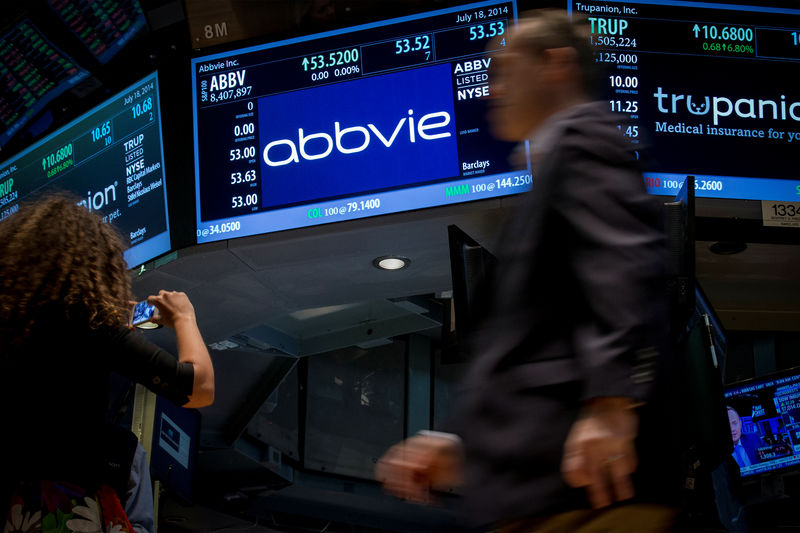 (Reuters) – AbbVie Inc (N:) posted quarterly sales above estimates on Friday and raised the lower end of its 2019 profit forecast, helped by strong demand for cancer medicine Imbruvica and a lower-than-expected drop in bestseller Humira’s revenue.

In June, AbbVie announced a $63 billion deal for Botox-maker Allergan Plc (N:), in a bid to diversify its drug pipeline amid growing threats to Humira’s longevity.

The world’s top-selling drug, which treats rheumatoid arthritis and psoriasis, has come under pressure from cheaper rivals in Europe and faces patent expiration in the United States, its biggest market, in 2023.

Humira sales totaled about $20 billion last year and the drug has accounted for the bulk of AbbVie’s revenue for years.

In the quarter ended Sept. 30, Humira sales dipped 3.7% to $4.94 billion, hurt by biosimilar competition outside the United States, but beat estimates of $4.89 billion, according to five analysts polled by Refinitiv IBES.

Cancer drug Imbruvica brought in sales of $1.26 billion, ahead of estimates of $1.19 billion.

AbbVie raised the lower end of its 2019 adjusted earnings per share forecast by 8 cents to $8.90, while maintaining the top end at $8.92.

Net earnings fell to $1.88 billion, or $1.26 per share, from $2.75 billion, or $1.81 per share, a year earlier, as research and development costs soared and the company took a charge related to assets acquired as part of an acquisition in 2016.

AbbVie said it continues to expect its deal for Allergan to close early next year and that both companies were cooperating with regulators after receiving a request for more information from the U.S. Federal Trade Commission in September.