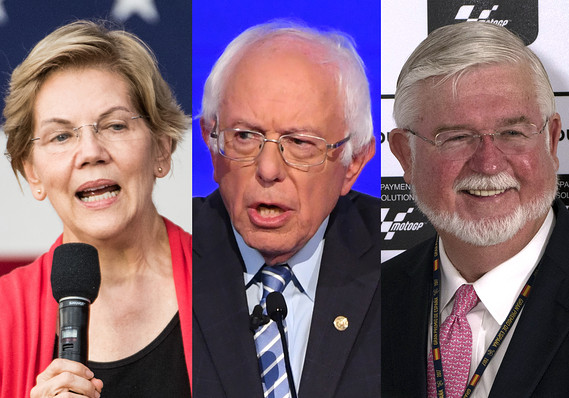 This person with political ambitions wants to erase billions in student loan obligations to address a debt crisis that’s weighing down the finances of far too many people.

Actually, it’s A. Wayne Johnson, a high-ranking official in the Trump administration’s Education Department who resigned from his post last week to run for a U.S. Senate seat in the Republican-leaning state of Georgia. The student loan system right now is “fundamentally broken,” he’s previously said.

Johnson — a self-described “moderate Republican” — acknowledges some similarities in the three plans to tackle $1.5 trillion in student loan debt. “Senator Warren and Senator Sanders fully understand the complete depth of the issue and the problem … I think that’s where we have complete agreement.”

Warren and Sanders have different ideas than Johnson on how to pay for debt cancellation, but their big picture goals are the same as his, said Johnson, who’s planning a run for a special election in 2020. “This not a partisan issue. This is what’s right for America,” Johnson told MarketWatch.

There are “intriguing” parallels between Warren’s plans and Johnson’s proposal, some observers say. The question is whether those similarities signal emerging bipartisan support for student debt cancellation. Some observers think it could be happening, but others doubt it and wonder if massive debt forgiveness is a good idea to start with.

Johnson, the former chief strategy and transformation officer at the Federal Student Aid office, would let all borrowers cancel up to $50,000 of their existing debts. His plan would wipe away $925 billion in student debt. People who already paid off their debts would get a tax credit up to $50,000.

Sanders’ plan would cancel all student-loan debt and has no income cap.

Johnson said he and Warren are focusing on the $50,000 figure because “it’s a significant inflection point where the majority of folks are taken care of.”

Americans owing student loan debt averaged a $32,700 balance as of the end of 2018, according to the Federal Reserve Bank of New York. Average student debt in Johnson’s state of Georgia is more than $40,000 this year, an 8% jump from last year, according to the credit bureau Experian EXPGY, -0.46%.

After debts are erased, what’s next?

The federal government would stop lending to students under Johnson’s plan. Instead, he would give students $50,000 to use the public or private school of their preference. “I believe people should have total choice where to go to school,” Johnson said.

How to pay for these proposals

Warren has said she will pay for her program with a wealth tax on the country’s richest 75,000 families. Sanders says he’ll fund his plan with a “Wall Street speculation tax” that’s a 0.5% tax on stock trades, a 0.1% fee on bond trades and a .005 fee on derivative trades.

Johnson would generate the money for his program with a 1% tax on the revenue of all for-profit and nonprofit organizations.

It is “highly unreasonable” to fund a major program by taxing a small number of people, Johnson said, referencing Warren’s plan. A 1% tax on companies and nonprofits is “sustainable” and an easy pill for businesses to swallow, Johnson said. “They are the ones that benefit directly from an educated workforce,” Johnson said.

The Warren and Sanders campaigns did not respond to requests for comment.

Could a bipartisan strategy on student-debt relief be in the works?

Seiberg said in a policy note this week that his firm has “long argued that student lending was the one issue that both Democrats and Republicans agreed was broken. The problem has been that neither side has ever put forward plans that we believe had a realistic chance of becoming law.”

Johnson’s plan “suggests there may be a middle ground,” even if the end result will not be total debt elimination, Seiberg wrote. It’s also a potential business opportunity for private student lenders to step in if the federal government gets out of the student lending business, he noted.

With the presidential election nearing, 2021 was the earliest there would be any legislative action on the idea, Seiberg said.

Some aspects could be ‘fairly mainstream’

Johnson’s proposals fit Republican thinking on higher education financing in some ways, but not in others, said Seton Hall professor Robert Kelchen.

Johnson’s ideas about getting the federal government out of the student lending business are “fairly mainstream” among conservatives, said Kelchen, who studies higher education finances.

For example, a Trump administration proposal in March called for limits on certain types of student loans and simplified repayment plans. “The current student loan system burdens students with debt and taxpayers with uncertainty about future costs,” the White House proposal said.

Johnson effectively wants to give students a $50,000 check to use at the school they see fit, which sounds a lot like the vouchers that Republicans favor the K-12 system.

On the other hand, Johnson’s “call for debt relief of that magnitude is unusual,” Kelchen said.

A YouGov poll in May said over half of all surveyed Republicans disagreed with student-debt cancellation, though 58% of Democrats supported the measure.

But is Johnson’s debt cancellation a GOP outlier?

“I wouldn’t read too much into this as a signal this is where the Republican party is heading. I don’t think so at all,” said Delisle, who disagrees with the idea of student loan debt cancellation.

Though some argue that student-loan debt is a crisis that’s forced millions to delay major life milestones including home buying and marriage, Delisle said he doesn’t “see a problem that needs to be solved there.”

Delisle pointed to a J.P. Morgan Institute study from July saying many families paid a median $179 in student loan bills every month. (The study was based on data from more than 4 million families with a Chase JPM, +1.95%  checking account.)

“Student debt isn’t bad per se. It isn’t harmful per se,” said Delisle. On the whole, the loans opened up educational opportunities, broadened careers and the “cost to taxpayers and the government is pretty modest, compared to the bang for the buck.”

Johnson sees it differently. For one thing, erasing debts could free up loads of money that could be used to start businesses or build up savings, he said. A 2018 study said student loan cancellation would increase the gross domestic product by $108 billion a year.

There’s a long way to next year’s special election, and Johnson’s never run for office before. But he thinks he’s already helped put a hard focus on student debt, just like Sanders and Warren.

“We have got to approach the problem that’s in plain sight,” he said.