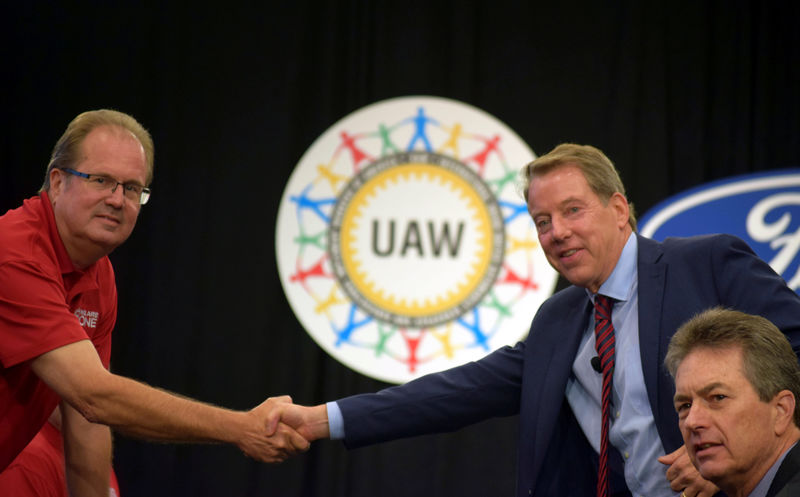 © Reuters. FILE PHOTO: UAW President Gary Jones shakes hands with Ford Motor Co Chairman Bill Ford at the start of contract talks between the union and the automaker in Detroit

By Ben Klayman and Nick Carey

DETROIT (Reuters) – United Auto Workers leaders from Ford Motor Co’s (N:) U.S. plants on Friday recommended approval of a tentative labor agreement that would allow the No. 2 U.S. automaker to avoid a strike like the one that cost its larger rival General Motors Co (N:) about $3 billion.

The union turned to Ford to negotiate a new four-year agreement after ratifying a contract last week with GM following a 40-day U.S. strike that shut down almost all of that company’s North American operations. Ford and the UAW quickly reached a tentative deal on Wednesday.

“This contract continues a strong pattern that gives all workers a path to traditional wages and maintains the job security and benefits our members deserve,” UAW President Gary Jones said in a statement.

Ford confirmed the deal in a statement and declined further comment.

The deal now must be ratified by the 55,000 UAW workers at Ford, with voting running through Nov. 15. While GM’s deal was approved, ratification is not a sure thing, as union members at Fiat Chrysler Automobiles NV (MI:) in 2015 rejected the first version of a contract.

Detailed terms of the Ford deal echoed those agreed to with GM, as the union typically uses the first deal as a pattern for those that follow. The UAW said the deal included agreements by Ford to invest more than $6 billion in its U.S. plants, and to create or retain more than 8,500 UAW jobs.

The spending includes a $1.1 billion investment in Ford’s Wayne, Michigan, pickup truck plant; $1 billion for the Louisville, Kentucky, plant, where Ford makes pickups and SUVs; and $900 million in an Ohio plant where it produces heavy-duty pickup trucks. A new unnamed vehicle will be added to the Ohio plant in 2023.

Full-time UAW members at Ford will receive a signing bonus of $9,000, but the deal will allow the Dearborn, Michigan, company to close an engine plant in Romeo, Michigan.

The deal includes pay raises and lump-sum payments over the life of the contract, a pathway to full-time employment for temporary employees and unchanged healthcare coverage.

Once the Ford deal is ratified, the UAW will turn to Fiat Chrysler to complete its quadrennial talks with the Detroit automakers.

The talks have at times been overshadowed by an ongoing federal corruption probe that has involved several UAW senior leaders and been linked to Jones. A UAW spokesman on Friday declined to address the probe.