Home
Breaking News
AT&T to add directors, sell up to $10 billion in assets next year
Prev Article Next Article 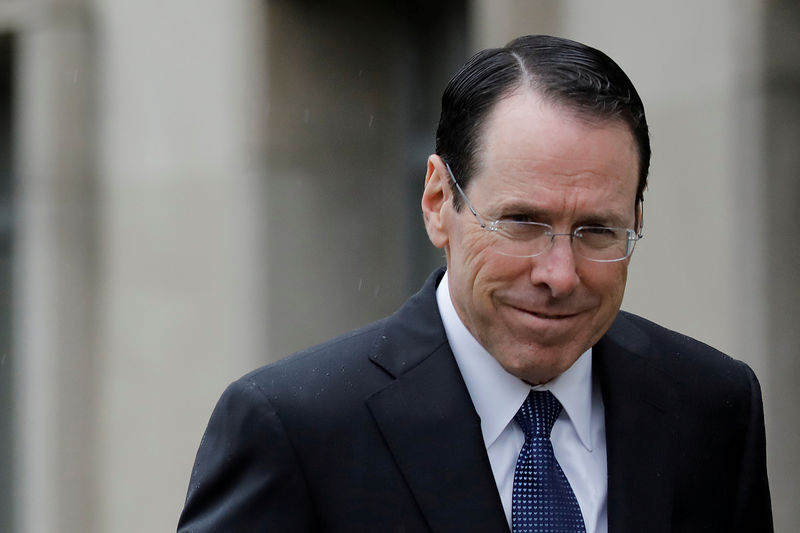 By Sheila Dang and Svea Herbst-Bayliss

(Reuters) – AT&T Inc (NYSE:) on Monday unveiled a three-year strategic plan that included selling up to $10 billion worth of businesses next year, paying off all its debt from the purchase of Time Warner and adding two new board members, bowing to pressure from activist investor Elliott Management.

The second-largest U.S. wireless phone carrier by subscribers has struggled with a stagnant stock price despite having spent billions on a bet that owning media content, as well as all the ways that people can access it through their phones, TVs and the internet, would pay off.

The result of that wager, AT&T’s HBO Max subscription streaming video service, will be unveiled on Tuesday in Burbank, Calif.

AT&T’s heavy debt load and declining revenue from segments like satellite TV provider DirecTV caught the attention of Elliott, one of the industry’s most powerful activist investors, which bought a $3.2 billion stake earlier this year.

The New York-based hedge fund, which invests $38 billion, last month criticized Dallas-based AT&T, which has market capitalization of $283 billion, for its acquisitions, bloated costs and leadership structure. It asked the company to stop buying more companies, review its portfolio and costs and add new board members, laying the groundwork for an attack on one of the biggest corporate targets ever.

By Monday, about seven weeks after Elliott made its suggestions, AT&T committed to buying back stock, adding two new directors and reviewing its portfolio.

There are “no sacred cows” when it comes to reviewing the business portfolio, long-serving CEO Randall Stephenson told analysts. While Stephenson had planned to retire soon, he pledged to stay through 2020 and oversee the changes himself.

While DirecTV will be an important piece of AT&T’s strategy over the next three years, AT&T will consider multiple options, including partnerships and other structures, Stephenson said.

Stephenson took control of the negotiations with Elliott, with the two sides meeting in New York and Dallas and often by phone to reach Monday’s announcement, a person familiar with the talks said.

Elliott got almost everything it asked for but made no commitments that prohibit it from exerting further pressure on the company, an unusual outcome in activist fights.

In a sign the two sides had quickly found common ground, Stephenson told Reuters on Monday that a standstill agreement, which could have prevented Elliott from taking further action, did not come up.

Publicly, Elliott was keeping a low profile, commending the company but saying nothing beyond its statement.

As a first step, AT&T plans to name a new board member with expertise in technology and cost cutting soon, Stephenson said on an analyst call in which he also had warm words for the hedge fund.

A second board member will be named next year and will have media credentials, the person familiar with the matter said, adding that both sides are still reviewing possible candidates.

To reduce its debt of $153.5 billion at the end of the third quarter, AT&T has been on a selling spree. Over the weekend, it sold Central European Media Enterprises Ltd (CME) to investment group PPF in a cash deal valued at about $2.1 billion.

The company expects to generate $14 billion through asset sales and other initiatives by the end of this year. It has reduced its net debt by $12.7 billion so far this year.

Monday’s announcement presented an “awkward conundrum” as AT&T issued financial guidance through 2022 that was ahead of Wall Street’s consensus, though its quarterly results fell short of expectations in every segment, Jonathan Chaplin, an analyst with New Street Research, said in a note.

AT&T lost 1.2 million premium TV customers, which includes DirecTV, as well as 195,000 streaming video customers, as it has sought to roll off subscribers who had signed up with price promotions.

Revenue from WarnerMedia was down 4.4% from the previous year to $7.8 billion as it made less money from the Warner Bros. movie studio.

Total operating revenue in the third quarter ended Sept. 30 fell to $44.59 billion from $45.74 billion a year earlier, missing analyst expectations of $45 billion, according to IBES data from Refinitiv..

The carrier added 101,000 net new phone subscribers who pay a monthly bill during the third quarter. Wall Street estimated it would gain 61,000 net new customer additions, according to a note from Cowen analysts.