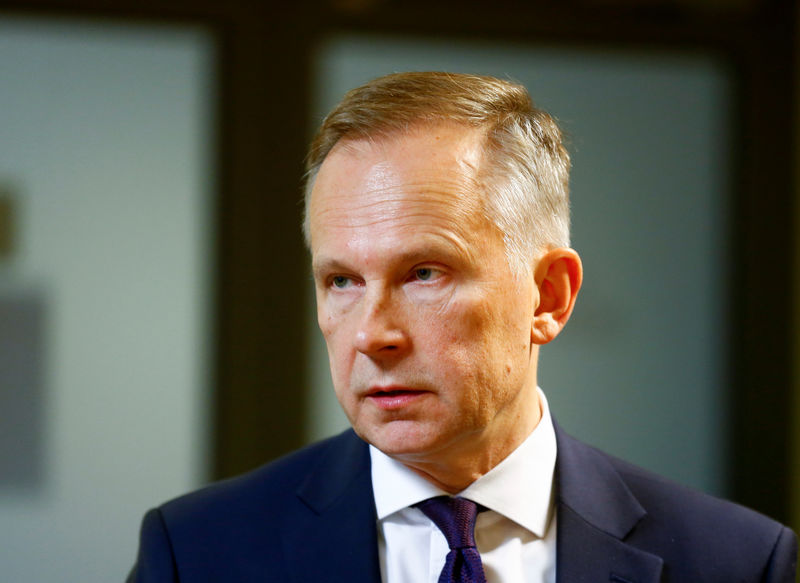 JURMALA, Latvia (Reuters) – Latvia’s central bank chief, who led the former Soviet republic into the euro, appeared in court on Monday accused of bribery in the first corruption trial of a European Central Bank governor.

Latvia’s public prosecutor has accused Ilmars Rimsevics, 54, of accepting the offer of a 500,000-euro bribe and taking a paid holiday in Russia.

Rimsevics’ trial is a landmark case for the 20-year-old euro currency bloc, which spans EU countries from Portugal to the three Baltic nations that neighbor Russia.

The case has tarnished the image of the ECB, where Rimsevics sits on the governing council, which decides the price of money in the euro zone and has the final say in supervising banks.

Rimsevics appeared in court alongside Latvian businessman Maris Martinsons, who prosecutors say acted as a middleman.

State prosecutor Viorika Jirgena said the central charge against Rimsevics was that he took a bribe. If convicted, he could face jail. Rimsevics denied the accusation, while Martinsons’ lawyer also denied the charges.

The case centers on allegations of a 500,000 euro bribe promised, and partly paid, by two shareholders of Trasta Komercbanka at a time when the Latvian bank was worried about its future.

Part of the evidence is based on conversations between the defendants in a sauna, secretly recorded by Latvian investigators.

Jirgena has earlier said the bribery dates back to 2010, when the shareholders paid for Rimsevics to spend a vacation in Kamchatka, a wilderness region in Russia’s far east.

In return, Jirgena said Rimsevics helped them prepare answers to questions from the Latvian regulator, the Financial and Capital Market Commission (FCMC).

Later, in 2012, the shareholders agreed to pay him 500,000 euros in two equal installments, in return for Rimsevics using his influence to soften treatment of the bank.

Lawyers for Rimsevics persuaded the judge on Monday to allow him travel to Frankfurt in December for what will be his final ECB Governing Council meeting before his term expires.

He had earlier been reinstated in that post after the ECB challenged his suspension from office. Rimsevics’ lawyers argued in court that his position with the ECB granted him immunity from such a prosecution.

The prosecutor alleges that Rimsevics was unsuccessful in preventing Trasta Komercbanka’s demise and that, as a result, the shareholders refused to pay the second 250,000-euro installment.

The bank closed in 2016 after the Latvian regulator said it had broken money-laundering rules.

The shareholders approached Latvian anti-corruption investigators, handing over evidence of the bribery.

As central bank governor, Rimsevics was entitled to attend meetings at the FCMC regulator and was also responsible, along with the finance ministry, for proposing its head.

A spokeswoman for the FCMC said it took decisions independently. The ECB declined to comment.

The stakes are high for Latvia. After securing independence from Russia in 1991, more than a dozen of its banks have promoted themselves as a gateway to Western markets for clients in former Soviet states, promising Swiss-style secrecy.

Its prime minister, Krisjanis Karins, has pledged to end that and promised to overhaul the banking sector but his efforts have been overshadowed by slow progress in the Rimsevics case. Rimsevics was originally detained in early 2018.

(This story fixes typo at the start of the third graph)