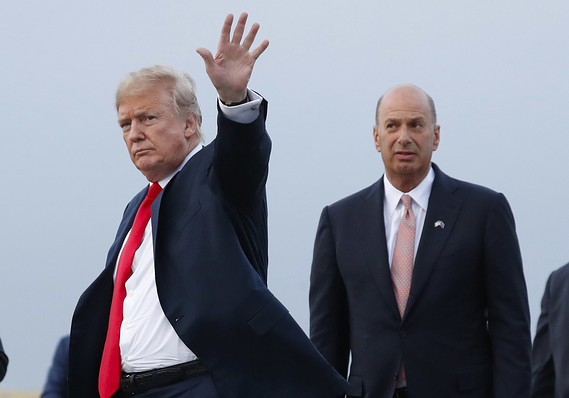 President Donald Trump is joined in July 2018 by Gordon Sondland, the U.S. ambassador to the European Union, as he arrives at Melsbroek Air Base in Brussels.

The U.S. ambassador to the European Union said in amended testimony released Tuesday that he now remembered telling a top Ukrainian official that U.S. aid to the country had a condition: announcing a probe sought by President Donald Trump.

‘I now recall speaking individually with Mr. Yermak, where I said resumption of U.S. aid would likely not occur until Ukraine provided the public anti-corruption statement that we had been discussing for many weeks.’

The testimony by Gordon Sondland marked a reversal from when he testified in person in October. The supplemental testimony, as well as a transcript of his interview with House lawmakers, was released by the committees leading the impeachment probe of Trump.

Democrats are probing Trump’s pressure on Ukraine to launch investigations into former Vice President Joe Biden, as well as an allegation that Ukraine — rather than, as U.S. intelligence agencies and the Mueller report concluded, Russia — interfered in the 2016 U.S. presidential election. Trump has denied wrongdoing.

In a three-page addition to his previous closed-door testimony, Sondland said he recalled a Sept. 1 conversation with Andriy Yermak, a top adviser to Ukrainian President Volodymyr Zelensky.

House Intelligence Committee Chairman Adam Schiff, a California Democrat, said transcripts from Sondland and Kurt Volker, the former U.S. special representative for Ukraine negotiations, “show the progression of Trump’s efforts to press Ukraine into the service of his own personal political goals.”

Transcripts from Ambassadors Sondland and Volker show the progression of Trump’s efforts to press Ukraine into the service of his own personal political goals, in what Sondland described as a continuum of insidiousness.