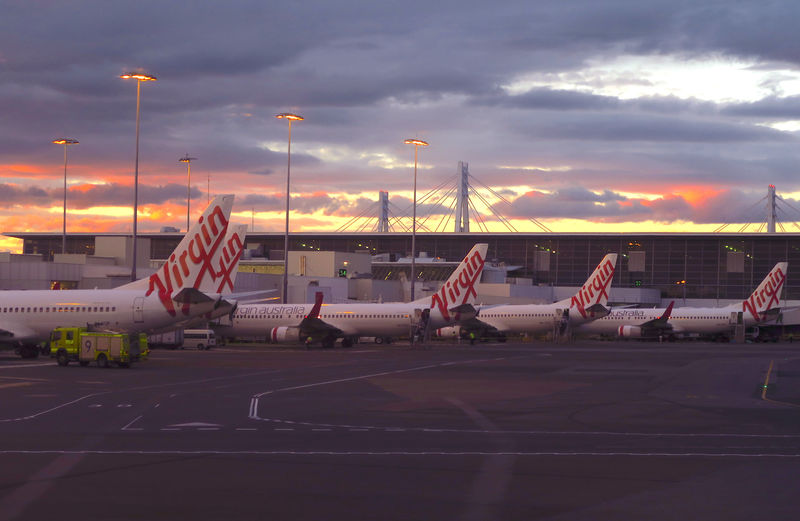 © Reuters. Aircraft from Australia’s second largest airline, Virgin Australia, sit on the tarmac at the domestic terminal of Sydney Airport

SYDNEY (Reuters) – Virgin Australia Holdings Ltd (AX:) plans to cut domestic capacity by at least 2% in the second half of the 2020 financial year, axe its Melbourne-Hong Kong route and remove five aircraft from its fleet, its chief executive said on Wednesday.

“Flying to the right destinations, with the right customer demand, and the right-sized fleet will improve our financial performance,” Virgin Chief Executive Paul Scurrah said at the airline’s annual meeting in Brisbane.

Qantas last month said it would increase domestic capacity to maintain market share against Virgin, pointing to forward scheduling data that showed Virgin planned to raise capacity by 2% in the second half ending June 30, 2020.

Virgin in August announced it would cut 750 jobs, merge business divisions and conduct a sweeping review of its operations after swinging to an annual underlying loss due to soft market conditions and higher fuel costs.

Scurrah said on Wednesday that the airline was working to get the flying balance right between Virgin Australia and its budget brand, Tigerair Australia, so that the pair were no longer operating on the same routes at the same time.

Virgin will remove two Airbus (PA:) A320s from the Tigerair fleet and three Fokker 100s from its regional business, he said.

The Melbourne-Hong Kong route, which Virgin said had “underperformed” amid widespread pro-democracy protests in the Chinese-controlled city, will be axed and the carrier will fly from Brisbane to Tokyo’s Haneda Airport instead.

In September, Virgin agreed to buy back the 35% of its frequent flyer business that it did not already own from private-equity group Affinity Equity Partners for A$700 million ($482 million).

Scurrah on Wednesday said the frequent flyer deal would allow for A$20 million of cost savings, which would help pay the interest on new borrowings taken out to fund the purchase.