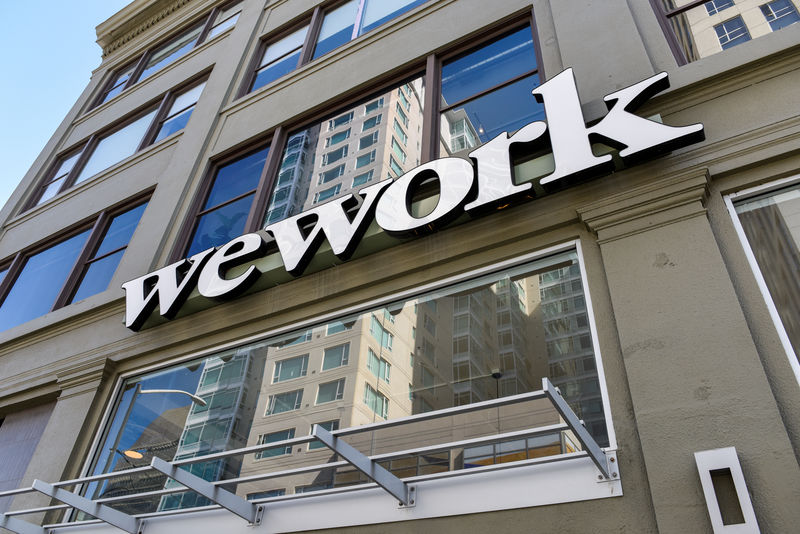 By Carrie Monahan and Sheila Dang

NEW YORK (Reuters) – SoftBank may be rescuing WeWork with a $9.5 billion cash injection but most rivals say they believe the office space sharing company is still in critical condition.

In interviews, six rivals were mostly more sober than gleeful about WeWork’s fall to earth, which has seen estimates of its valuation drop from $47 billion or more in August to as little as $5.9 billion based on terms of the SoftBank lifeline. Hedge fund investor Bill Ackman warned last week it may be worth nothing.

The company was forced to abandon its plan for an initial public offering as investors questioned big losses, whether its business model was sustainable, and the way it was run by its cofounder Adam Neumann, who subsequently quit as chief executive.

Through its rescue, Japanese technology investment company SoftBank Group Corp (T:) is seeking to protect its previous investment of about $10 billion in WeWork, though many investors and analysts question whether it will ever be able to recoup that. Its stake will rise to 80 percent from 30 percent.

Rivals suggest many ways for WeWork to reduce losses, all painful.

They include closing or selling operations in some secondary or poorly performing places, as well as getting out of activities such as construction that are not essential to its main business. The competitors say WeWork should also stop discounting, mothball some of the floors of newly leased real estate, and seek new ways to partner with landlords and investors.

Big job cuts are a given.

But it is a long road to profitability.

“When I try to do the math with divestitures of non-core (businesses) and layoffs, those things alone are not buying them enough runway,” said Joshua White, managing director of MakeOffices, which has 16 office sharing sites across three U.S. cities.

He said WeWork has to “switch from growth at all costs to profit at all costs,” but the long-term leases it has signed are a barrier. Getting out of those could mean large penalty payments.

“WeWork is in a very challenging situation,” said Charles Robinson, senior vice-president for U.S. operations at Servcorp, an Australia-based company with more than 160 sites across the globe. “They’re going to have to look at ways of getting some of those liabilities off their balance sheet without destroying their reputation.”

He added: “Best-case scenario – if they do fix it, the company will be valued at $4 billion.”

The company has added 114 new sites in the past four months, according to its website, and is planning on opening another 208 in the next few months, bringing its total to 850.

It already had $18 billion of long-term lease obligations at the end of June.

In response to questions from Reuters, a WeWork spokesperson said: “Our industry-leading core business continues to perform well, and our new executive leadership is focused on growing our global workspace platform while accelerating our path to profitability.”

WeWork’s new Executive Chairman Marcelo Claure told employees late last month after the SoftBank rescue announcement that there was “zero risk of the company going bankrupt.” He said WeWork would get back to basics, make profitability a priority, and review its markets to see if they made sense.

He said there would be an unspecified number of layoffs. In recent weeks, sources close to the company have talked about as many as 4,000 job cuts out of more than 12,500 employees it had at the end of June.

That will put WeWork in the extraordinary position of firing employees at a time when it is opening many new offices.

WeWork has been bleeding cash at a fast rate.

Sources familiar with the situation said it was set to run out of cash in November if it had not had the Softbank injection. It had $2.47 billion of cash on its books on June 30.

The cash burn rate may also be increasing in the short term. Neumann is receiving a $185 million “consulting” fee, and WeWork will also have to fund severance costs for those being laid off, and pay any additional advisers hired for the SoftBank deal.

It means that the $5 billion of debt and $1.5 billion of equity SoftBank is providing will also be quickly eaten through unless it slashes costs and boosts revenue. The other $3 billion from SoftBank was used to acquire shares from Neumann and other shareholders.

WeWork declined to comment on its cash burn rate.

It is also unclear if weeks of negative publicity has hurt revenue, whether in deterring new customers or unsettling existing tenants.

Longer term, WeWork could try to move to more of a franchising model, reducing the leasing liability problem, some rivals say, though potential returns are much lower. Another less risky model would be to focus more on management partnerships with landlords and manage space for a fee.

Such transformations would be difficult. “I think they’re a long way’s off earning the trust of landlords to become a licensee,” said John Arenas, CEO Of Serendipity Labs, which has coworking sites in 37 places in the United States.

Another big change suggested is that WeWork stop offering incentives to customers. That prospect does excite some rivals. “We’re jumping out of our seats right now,” said Jamie Hodari, the CEO of Industrious, with sites in 33 American markets.