Home
Stocks
Market Extra: Buybacks are the ‘dominant’ source of stock-market demand, and they are fading fast: Goldman Sachs
Prev Article Next Article

There has been no bigger cheerleader for large-cap U.S. stocks than large, American companies themselves.

Corporations are on pace to provide $480 billion in bids for S&P 500 SPX, +0.07%  stocks this year, according to an analysis by Goldman Sachs, providing more demand than any other source in 2019, including households, mutual funds or exchange-traded-funds. 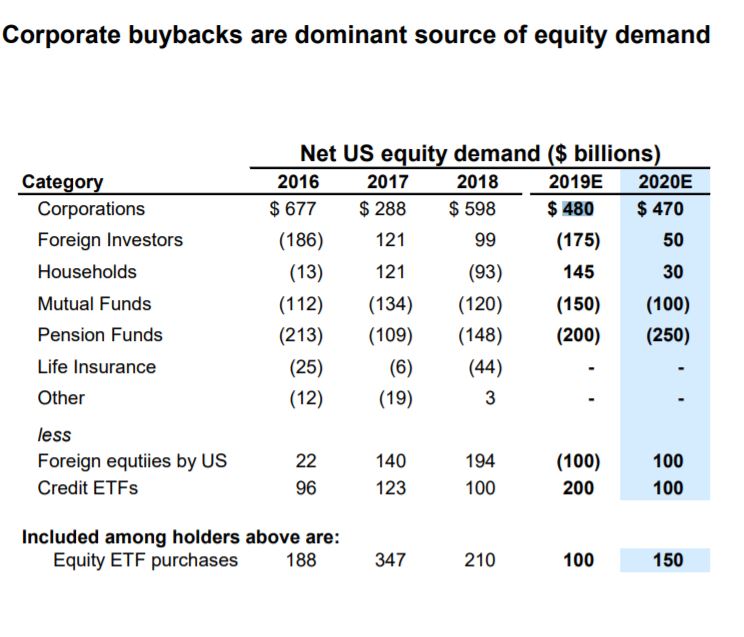 But this key source of equity-market support is waning, analysts and investors tell MarketWatch, a trend that will weaken demand for equities, as Russell 3000  RUA, -0.01%  companies have announced $795 billion in share-repurchase authorizations, a 12% decline from the roughly $900 billion authorized last year, according to Michael Schoonover, chief operating officer at Catalyst Capital Advisors and portfolio manager of the Catalyst Buyback Strategy Fund BUYIX, +0.81%.

Goldman Sachs predicts that share repurchase authorizations will fall another 5% in 2020, and for good reason, given that in 2019, S&P 500 companies paid out more than 100% of their free cash flow in the form of dividends and buybacks. 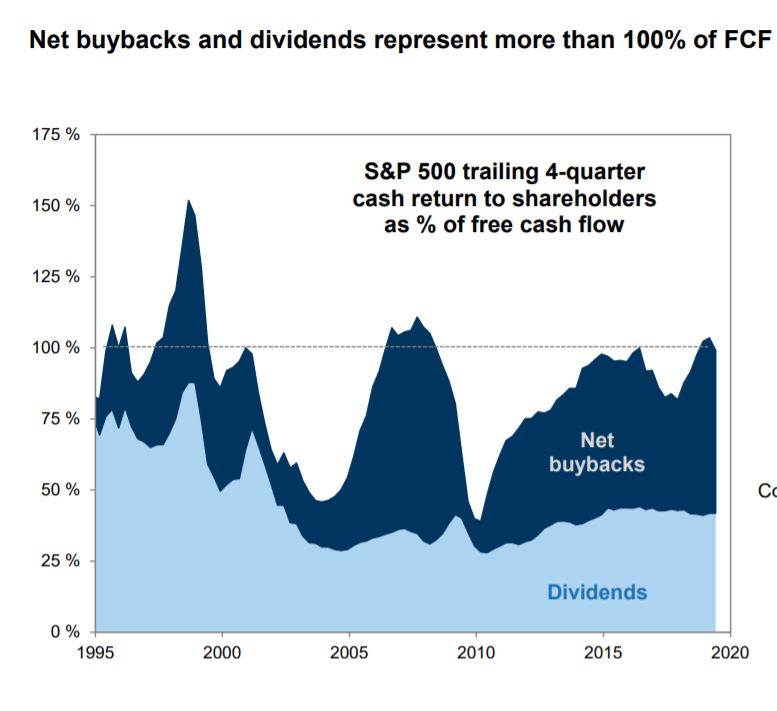 As for the effect of share repurchases on equity prices today, there is little doubt that they are helping fuel earnings-per-share growth during a period when corporate profits are in decline. Earning-per share at S&P 500 companies are on pace to decline by 0.7% in the third quarter, according to data from Refinitiv, but overall net income is set to fall by a larger 2.9%. In the fourth quarter, EPS is projected to rise 0.8% even as net income falls 1.5%.

“It’s a fair critique of corporate earnings to say that earnings “growth” in 2019 is a bit deceptive as the value is being financially engineered by corporate finance departments, not organic, core-business growth,” wrote Tom Essaye, president of the Sevens Report, in a Wednesday note to clients. “Companies aren’t making any more money than in 2018—they just have a smaller share count to spread the money over, so EPS are rising.”

Meanwhile, actual executions of previously authorized buybacks are falling even faster than authorizations. According to data from InsiderScore, S&P 500 share repurchase volumes fell in the second quarter — the last period with complete data — by 19.5%, from $193.8 billion in 2018 to $156.1 billion this year.

The slowing of share repurchases “does remove an incremental buyer for stocks,” Essaye wrote. ”Corporate buybacks have been a key underlying engine of stock market gains in the last few years, but after looking at all of the details and the ‘corporate plumbing’ behind the record amount of share buybacks, the associated risks seem to outweighing the potential for continued upside in this late-stage environment,” he added.

That said, while a sharp decline in share repurchases will reduce demand for stocks on the margin, they will likely remain a key tool for corporate executives in an environment where slow economic growth creates fewer opportunities for profitable investment, and historically high profit margins keeps cash flowing into corporate coffers.

“Despite the political backlash, buybacks are here to stay,” said Catalyst’s Schoonover. “Companies just prefer them these days over dividends because of tax benefits and because there is very little negative market response if they don’t execute.”