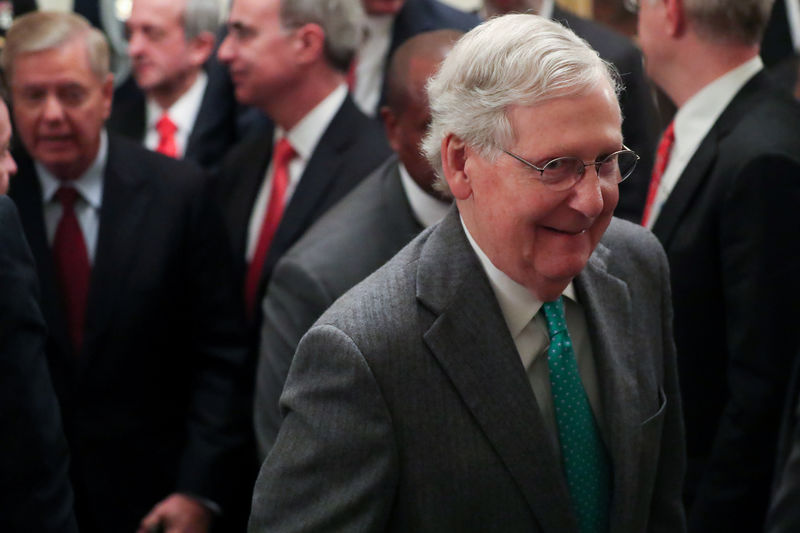 WASHINGTON (Reuters) – Senate majority leader Mitch McConnell joined a bipartisan group of senators on Wednesday in introducing a bill to secure the pensions for nearly 90,000 retired coal miners as a recent wave of coal company bankruptcies threatens the solvency of the federal pension fund.

The Bipartisan American Miners Act, co-sponsored by McConnell, of Kentucky, and West Virginia Senators Joe Manchin, a Democrat, and Shelly Moore Capito, a Republican, would transfer funds from the federal abandoned mine lands program to avert insolvency of the United Mineworkers of America pension plan.

Kentucky and West Virginia are among the biggest U.S. coal-producing states.

A bankruptcy filing last week by one of the largest coal mining companies, Murray Energy, was expected to hasten the insolvency of the pension fund – estimated to occur by 2022. Eight other coal companies have filed for bankruptcy over the last two years as has taken over as the primary fuel for U.S. power plants.

“The startling number of orphaned miners in the drastically underfunded pension plan presents an urgent crisis for entire communities of miners, retirees, and their families,” McConnell said in a statement.

If passed, the bill would secure the pensions of around 92,000 retired and working coal miners and ensure health care for 12,000 retirees.

UMWA, the miners’ union, which has been pushing for Congress to pass legislation to save the pensions for years, said the new bill was a breakthrough.

“With this one bill, the United States Senate has taken a giant, bipartisan step forward in keeping America’s promise to our coal miners and their families,” said UMWA President Cecil Roberts.

The bill does not address the future of the federal program to ensure medical coverage for miners suffering black lung disease, which UMWA has been urging lawmakers to address https://www.reuters.com/article/us-usa-coal-blacklung/u-s-coal-miners-discouraged-by-black-lung-meeting-with-mcconnell-idUSKCN1UI18G.

Manchin had included a measure to restore a higher coal excise tax to boost the Black Lung Disability Trust Fund in an earlier version of a pension bill, but said Wednesday he would introduce a separate bill to tackle that issue. For now, he said the Senate has a path forward to address the looming crisis facing the pension fund.

“This is not a solution that can be held off any longer and we must act now,” he said.

A spokeswoman for McConnell did not comment on the timing of moving the bill through the Senate.