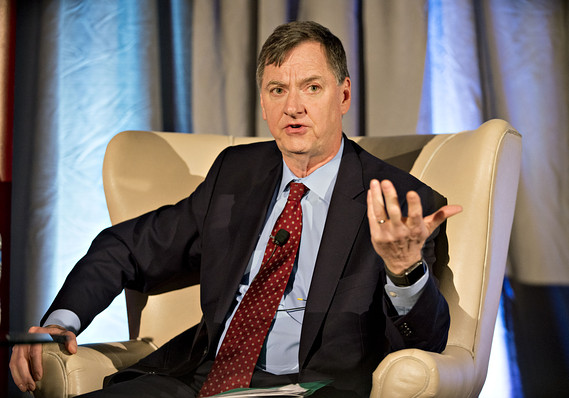 The U.S. economy is doing quite well at the moment and there is a chance the central bank might have not have to take any more monetary easing steps, Chicago Fed President Charles Evans said Wednesday.

“I don’t see we necessarily have to cut rates more, but we’ll see how the data come in,” Evans said, in an interview on Yahoo Finance.

Traders who use futures contracts to bet on the path of the fed funds rate now project one interest rate cut over the next year, according to CME FedWatch. However, many economists think the economy might slow markedly in the next few quarters, forcing the Fed to cut rates a few more times.

Evans, who is a voting member of the Fed’s interest-rate committee this year, was upbeat about the economy.

At various times in the interview, he said the October job report was “quite strong,” the outlook was “quite good” and the economy “quite resilient.”

But the Chicago Fed president said he’d like to see inflation and business investment pick up.

Any steps to remove the uncertainty over international trade policy “would be extremely helpful,” Evans said.

Given the Fed’s three interest rate cuts since July, Evans said he expects inflation will rise to the central bank’s 2% annual target and perhaps overshoot “a little bit.”

“We’re moving in the right direction” on inflation, he said.

Stepping back, the central bank’s monetary easing has been “even more substantial” that just three rate cuts, given that the central bank thought it would be raising rates in 2019, he said.

There has been a “150 basis point turnaround” relative to what the Fed had been indicating one year ago, Evans said.

Evan’s comments fit with an upbeat theme from Fed speakers since the central bank cut rates for the third time this year last week.

The Fed’s current guidance is that they are on hold unless info “materially” alters their outlook for growth slowing to trend & the UR gradually rising, in other words unless there are tangible recession risks? How does that support inflation & expectations that are already low?

And New York Fed President John Williams on Wednesday said we’re in a “Goldilocks economy” not too hot, not to cold,” according to Reuters.

Stocks SPX, +0.04%  were lower in afternoon trading with reported talks of a merger of heavyweight tech giants Xerox Holdings Corp. and HP Inc.