Home
Stocks
The most tax-friendly U.S. state for retirees isn’t what you’d guess — and neither is the least tax-friendly
Prev Article Next Article

While retirees flock to Florida in part for its tax-friendliness, those who really want to save big on their tax bill may want to head west. An analysis released this week by the personal-finance publisher Kiplinger revealed that the state of Wyoming was the most tax-friendly for retirees.

“For Wyoming, it starts with the fact that there is no state income tax,” explains Rocky Mengle, the tax editor at Kiplinger. That means the state does not tax Social Security benefits, pension income, 401(k) plan withdrawals and IRA distributions, or other income. “You can’t beat that,” he says, adding that property and sales taxes are also relatively low in Wyoming. “When you add it all up, Wyoming offers retirees the most tax-friendly environment around.” 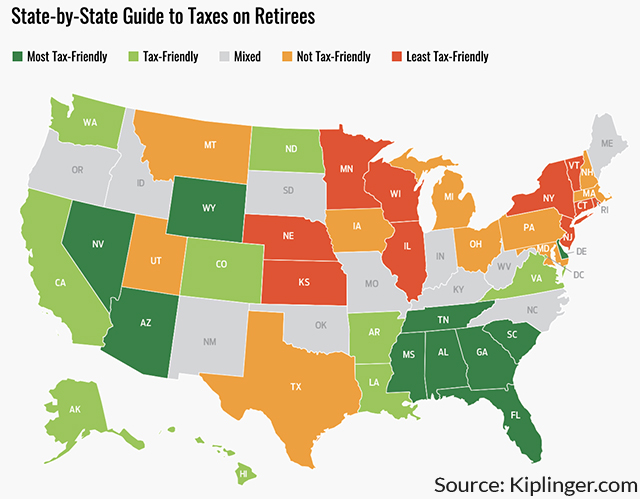 The Kiplinger analysis looked at the estimated state and local tax burdens in each state for a hypothetical retired couple who had income from Social Security, an IRA, a private pension, interest and dividends, and capital gains. This couple also had a $400,000 home with a small mortgage and $10,000 in deductible medical expenses.

Other states that are very tax-friendly include Nevada and Florida, which don’t have income taxes, and Tennessee, whose income tax is only assessed on interest and dividends, explains Mengle. The remaining states exempt Social Security benefits from income taxes. Mengle adds that, “oddly enough, out of the 10 states with the highest sales taxes by our calculations, five are also on the retirees’ most-friendly list,” noting that, while this matters, “sales taxes tend to have the least overall impact on a retiree’s overall state tax burden.”

The 10 most tax-friendly states for retirees:

Meanwhile, Nebraska takes the cake as the least tax-friendly state for retirees, according to the analysis, which Mengle admits is likely to surprise people. “In Nebraska’s case, high income taxes and property taxes make it hard on retirees living there,” he says, adding that the state also taxes Social Security benefits for many of its retirees and does not offer an “exemption — like you see in many other states — for other types of retirement income,” among other tax-related issues.

The 10 least tax-friendly states for retirees:

One big factor that will land you on the least friendly list is how the state treats Social Security benefits and other retirement income, Mengle explains. Rhode Island, Vermont, Minnesota, Kansas, Connecticut and Nebraska, for example, at least partially tax Social Security benefits for some of their residents. Many of the other states on the list, notably New Jersey, Connecticut and Illinois, have high property taxes.

It’s important to point out that this list of the most and least friendly tax states for retirees would look different if they chose a different hypothetical retired couple for their model. And, as we know from those who live in Florida for part of the year, snowbirds can ease their tax burdens if they’re well-versed in the tax laws of both states in which they reside.