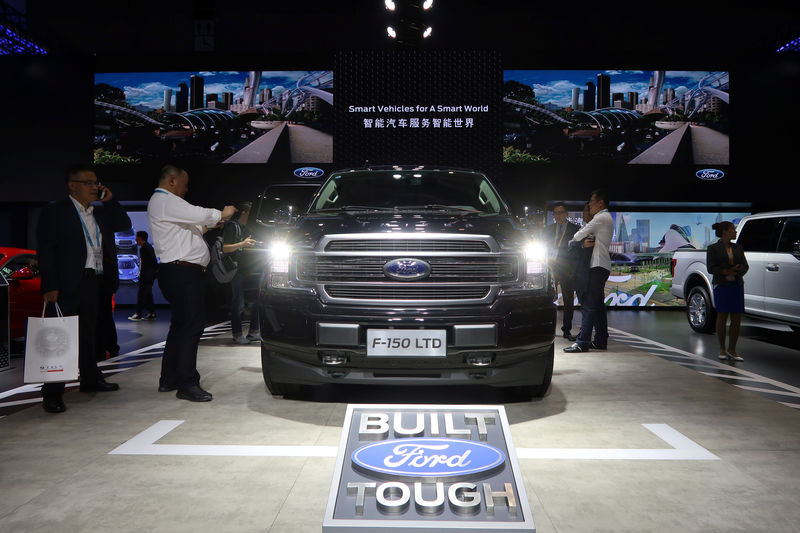 By Yilei Sun and Norihiko Shirouzu

SHANGHAI (Reuters) – Ford Motor Co (N:) will consider building Ford-branded pickup trucks in China if restrictions on driving pickups in cities are relaxed and it could also roll out customized models at that time, a senior company official said.

Ford was among foreign automakers exhibiting their wares this week at the China International Import Expo (CIIE) in Shanghai, a fair aimed at showcasing the country’s free trade credentials.

Many of the vehicles that Ford, General Motors (N:) and Fiat Chrysler Automobiles (MI:) put on show were pickup trucks, a segment of the Chinese market that has remained relatively resilient even as the overall industry braces for a second year of dipping sales.

Demand for pickups – both from traditional farm and construction-related customers as well as newer interest from general car buyers – has increased and last year China became the world’s second-biggest pickup truck market.

But many big Chinese cities restrict pickups from entering their centers, an obstacle for sales growth. But some urban areas have relaxed the rules in recent years, boosting pickup sales.

“If more areas relax restrictions on pickup trucks, we will plan to locally manufacture Ford-branded pickup trucks in China to meet the demands of Chinese consumers with considerations of the market situation,” Joseph Liu, Ford’s China vice president for product innovation, told Reuters on Wednesday.

The Dearborn, Michigan-based automaker does not build Ford-branded pickup trucks in China, but its local partner, JMC (SZ:), in which Ford has a 32% stake, manufactures Yuhu series pickups with Ford technology.

Liu did not provide details about manufacturing plans or model specifications but said made-in-China Ford pickup trucks would be different from existing imported models, if and when Ford went ahead with the plans.

For instance, China-made pickup trucks would be of sizes that are suitable for China’s roads and are less likely to have capacity for towing trailers as current policies limit that.

Other automakers at CIIE told Reuters this week they were there to test the waters. GM and FCA also displayed their new pickup models such as the Chevrolet Silverado, GMC Sierra Denali, and Jeep Gladiator.

FCA representatives said the company planned to launch the Gladiator in China but was still working on adjusting the model to meet regulatory requirements on things like emissions.

A spokeswoman for GM said the company wanted to showcase American-style pickup trucks in Shanghai to get public opinion. She said, however, that GM had no plan to launch these models in China now.