Home
Stocks
Mark Hulbert: How some investors knew gold was about to slide
Prev Article Next Article

The gold market’s exuberance is catching up with the yellow metal. Gold prices were down more than 1.5% in trading on Thursday, building on earlier losses.

All told, bullion GC00, -1.62%  is now almost $100 lower than where it stood two months ago, when I argued that excessive optimism among the gold timers meant that gold’s near-term direction was down.

The shares of gold mining companies have been hit particularly hard. VanEck Vectors Gold Miners ETF GDX, -3.00%   for example, is 15% today lower than where it stood in early September.

Unfortunately, gold-market sentiment is only marginally better today than it was when I wrote about it before. Though the average recommended gold market exposure level among gold timers has retreated somewhat this week, it remains elevated. In fact, it still is higher than 70% of all daily readings since 2000.

This average exposure level is what is measured by my Hulbert Gold Newsletter Sentiment Index (HGNSI). This average stood at 56.3% when I wrote my early-September column on gold market sentiment. It got as high as 64.6% earlier this month, before dropping back this week to 43.8%. This latest reading is at the 71st percentile of all daily readings since 2000.

Contrarians therefore believe that gold will have to decline even further before bullish sentiment recedes sufficiently to create a short-term buying opportunity.

In each case, the benchmarks produced significantly higher returns following the 5% of the lowest HGNSI readings than following the 5% that were highest. Those thresholds are at the minus 23.3% and plus 66.5% levels.

The difference in subsequent returns following those thresholds is illustrated in the accompanying chart for the VanEck Vectors Gold Miners ETF. As you can see, the spread between this ETF’s average return 3-month returns following these high and low thresholds is ten percentage points. That’s equivalent on an annualized basis to a spread of more than 30 percentage points. 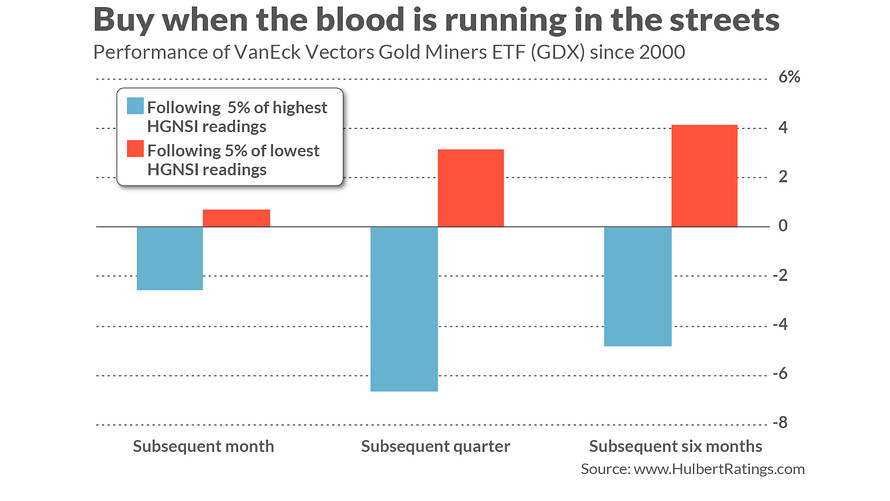 To be sure, with the HGNSI currently lower than this upper threshold, the outlook isn’t as negative as suggested by the declining bars in the accompanying chart. But it still is negative: The GDX on average over the past two decades has declined following readings as high or higher than they are currently.

You might object to this analysis by arguing that gold’s price is affected by myriad factors other than sentiment. Bullion’s drop this week, for example, appears to be in reaction to good news on the trade front between the U.S. and China. Sentiment might not have anything to do with the drop.

Contrarians’ response is not that excessive bullishness causes a drop but that it creates the preconditions in which a drop is more likely. Just consider the numerous other occasions over the last two years in which there was apparently good news on the trade front. Gold did not slide on all such occasions, especially not as much as it did earlier this week.

In any case, however, the usual qualifications apply: Contrarian analysis doesn’t always work. And even when it does, it only sheds light on the market’s near-term direction. Nevertheless, contrarians won’t be surprised if gold declines more in coming weeks.

More: Turn yourself into a better investor by learning from hedge-fund star Jim Simons’s successes and failures