Home
Breaking News
T-Mobile in talks with Sprint on merger, does not rule out lower price
Prev Article Next Article 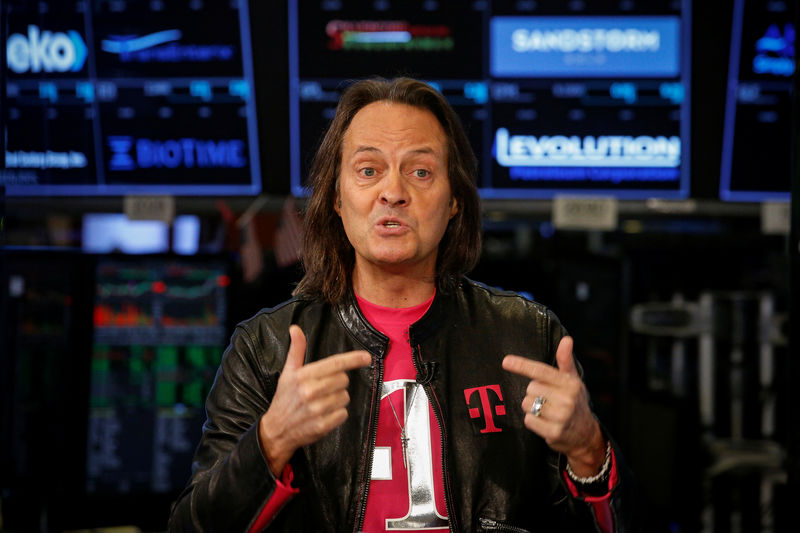 © Reuters. T-Mobile CEO John Legere speaks about his company’s merger with Sprint during an interview on CNBC on the floor of the NYSE in New York City

WASHINGTON (Reuters) – T-Mobile US (O:) Chief Executive John Legere on Thursday acknowledged talks are ongoing with Sprint Corp (N:) to extend their merger agreement, but he declined to rule out requesting the $26 billion price be reduced.

The T-Mobile-Sprint deal, announced in spring 2018, has won regulatory approval from the Justice Department and Federal Communications Commission but faces a lawsuit from more than a dozen state attorneys general seeking to stop the deal. The previous merger agreement expired last week.

“What I can say is yes we are having conversations as partners about whether and how long we move forward the date… and what if any items should be agreed between the parties in exchange for agreeing to extend those terms,” Legere said during a webcast to discuss next generation 5G wireless and other issues.

“It’s not a hostile conversation. It’s an active one,” he said, while giving no sense of when agreement might be reached.

“It’s sort of like going to month-to-month on your rent. There’s no more lease. You continue to move forward.”

Sprint said it was not backing away. “We continue to be committed to completing the merger with T-Mobile,” Sprint spokeswoman Lisa Belot said in an email.

Legere said a new merger agreement’s terms could entail “‘How do you handle things that have happened that need to possibly to be indemnified, how do you agree on future things that you will share in order to settle the deal, etc.’ It’s a broad array of things.”

Legere said his company had made settlement offers to the state attorneys general, who argue that a merger of the third- and fourth-largest U.S. wireless carriers would mean higher prices for some of the poorest consumers. Legere said he sent them a new letter on Thursday.

“We’ve had very frank discussions,” Legere said. “We have made settlement proposals as ways to continue those conversations.”

The reference to a possible lower price for Sprint is another piece of bad news for Softbank Group, which owns a big chunk of the U.S. wireless carrier. Softbank took a hit with WeWork, which abandoned a public offering, and on Wednesday it announced its first quarterly loss in 14 years.

Legere was speaking at an event to announce initiatives that he said were dependent on the merger proceeding: giving first-responders free access to 5G wireless; a plan to help children without access to the internet do homework; and a $15 per month prepaid service with unlimited talk, text and 2GB of high-speed smartphone data..

He also said the company planned to launch 5G services on Dec. 6.