Home
Stocks
The Margin: ‘Merry Coffee’ is the best Starbucks could come up with for its holiday cups?
Prev Article Next Article

‘Tis the season to rip Starbucks for its holiday cups.

The Seattle coffee giant has brewed up plenty of controversy year over year in trying to make its festive cups more inclusive for those who don’t celebrate Christmas. And 2019 is no exception.

Starbucks SBUX, -0.43% unwrapped this year’s holiday cup design Thursday: four different patterns, styled in red, white and Starbucks’ signature green (which are, coincidentally, Christmas colors — although Kwanzaa shares red and green, as well as black). The different cups showcase either swirling candy cane stripes, or green polka dots, as well as the terms “Merry Coffee” and “Starbucks” printed all over them.

And, as has become holiday tradition in recent years, some sippers accused the chain of being part of the so-called “War on Christmas.”

One customer tweeted a photo of the green “Merry Coffee” cup with, “They do anything to avoid saying the name ‘Christ’… Very ugly design too.”

Is merry coffee a war on Christmas? pic.twitter.com/XKazbF7Y8B

Good to see the war on Christmas is going well, these cups are ugly pic.twitter.com/4Z5diiwh4C

But perhaps even more cringeworthy was the “merry coffee” slogan itself, according to many on Twitter TWTR, -0.46%. A Grub Street headline also asked, “WTF Is ‘Merry Coffee’?” The story continued, “It’s almost offensive how inoffensive these cups will be.”

Multi-billion dollar corporation and they came up with Merry Coffee. Wow.

Starbucks did not respond to a MarketWatch request for comment by press time. But a spokesperson told Fox News that, “During the holidays, Starbucks aspires to spark mini moments of joy in our customers when they visit our stores, making their day even more cheerful and bright.”

The rep also denied that the “merry coffee” tagline is meant to avoid saying “Merry Christmas.”

“‘Merry coffee’ is a fun and festive expression that we hope our customers feel as they take the very first sip of their favorite Starbucks holiday beverage,” the spokesperson added, noting that the brand is still selling its signature Christmas Blend coffee this year, and that holiday music, including Christmas carols, will be played in stores.

Starbucks has been serving its seasonal peppermint mochas and eggnog lattes in holiday cups since 1995, when the original vessel was actually closer to purple than red. After those first magenta cups in 1995 and 1996, the chain began rolling out the now-iconic candy apple red holiday cups each November that long featured more Christmas-y designs such as reindeer, Santa on his sleigh, Christmas lights and Christmas tree ornaments — although they didn’t explicitly say “Merry Christmas.” The cups also featured more general wintery icons like snowmen and snowflakes. 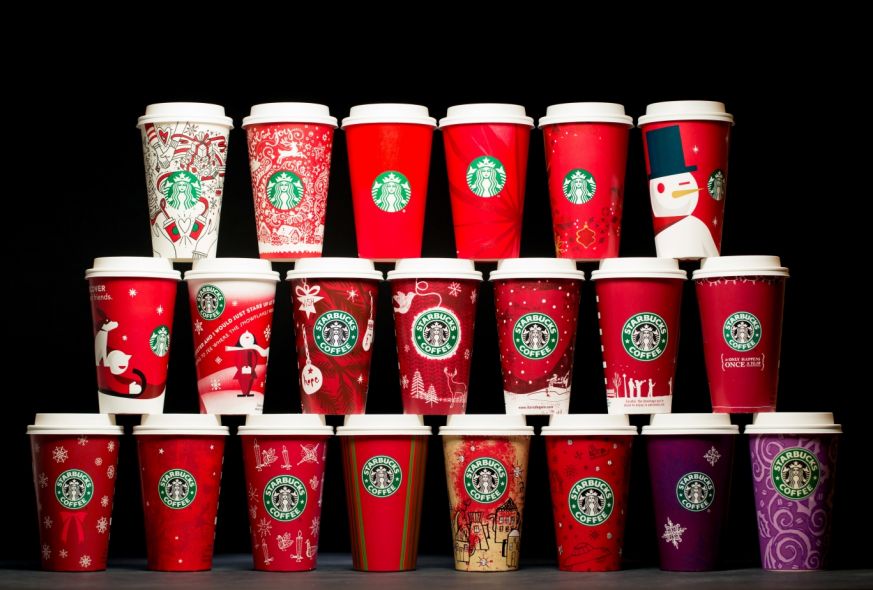 But then it really ticked-off Christmas traditionalists in 2015 by releasing a plain, ombre red cup with no designs on it at all, intended to “usher in the holidays with a purity of design that welcomes all of our stories.”

The backlash against Starbucks for waging a “war on Christmas” (with former paster Joshua Feuerstein tweeting that Starbucks removed Christmas from its cups because “they hate Jesus”) reached fever pitch. Even then-presidential candidate Donald Trump addressed the cup controversy on the campaign trail. “Maybe we should boycott Starbucks,” he told a crowd in Springfield, Ill. “If I become president, we’re all going to be saying Merry Christmas again, that I can tell you.”

The following year, Starbucks scrapped the red cups for green ones featuring “a mosaic of more than a hundred people, drawn in one continuous stroke” that was supposed to be “a symbol of unity” after a contentious election year. Some customers didn’t buy it, and accusations of an anti-Christmas bias persisted.

In 2017, the holiday cup featured more familiar Christmas-y symbols like snowflakes and wrapped gifts in red, white and green — as well as a pair of holding hands. The non-binary hand-holding spurred some conservatives to question whether Starbucks was pushing a gay agenda. The chain told the New York Times that, “We intentionally designed the cup so our customers can interpret it in their own way.”

So last year, Starbucks avoided major controversy for a change by rolling out holiday cups in four different designs: a holly print; a red, white and green stripe; and two others that resemble Christmas gift wrapping paper. It also introduced a sustainable, reusable red holiday cup, which it brought back on Thursday morning as a free gift for Starbucks customers who came in early and ordered a holiday drink, only available while supplies lasted.

It must have gotten the recipe right that time, as Starbucks’ foot traffic nearly doubled after it released its holiday cups last year.

What do you think of this year’s cups? Let us know in the comments.